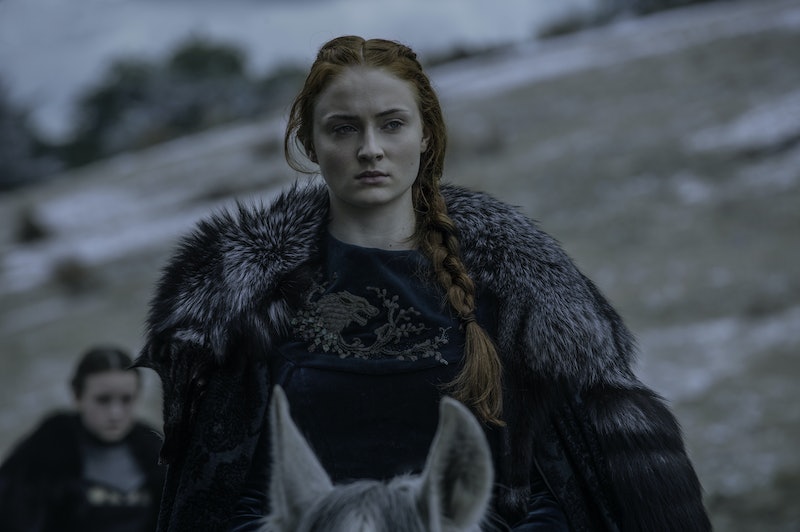 Ramsay Bolton has always been one of Game of Thrones most unpredictable villains. Even after his death, fans are still wary of the various affects he could have on other characters. For example, is Sansa pregnant on Game of Thrones ? In an interview with Bustle, actor Iwan Rheon shot down (sorry, Rickon) at least one of the alleged clues.

It's not a new theory; this has been worrying fans for a while, but when Ramsay threatened Sansa in their final scene by saying "I'm part of you now," many seemed to think that Game of Thrones was setting up that twist, which would continue both House Bolton and Sansa's string of lousy luck. However, Rheon says that foreshadowing a pregnancy certainly wasn't what that specific line in the episode meant.

"What he's saying to her," he says, "is that his mind, his mark, will be on her. Very much like if you look at Theon now, he's not the same man as he was. He's been broken, mentally and physically. So I think what Ramsay's saying is, 'You'll never be able to shake me off. No matter if I die, I'm always gonna be a part of you, because of what I've done to you.'"

It was truly an incredible scene, easily one of the highlights of the season. As far as how correct Ramsay is, though, I'm not so sure. The show checked in with Theon in the very same episode, and he seems to be doing... OK. Plus, Sansa Stark is definitely a killer now. That much has changed. She won't be able to brush off Ramsay's abuse right away. Maybe we don't know yet how Ramsay's "mark" so to speak will manifest itself in Lady Stark. But the path to recovery is there.

However, Rheon adds that "whether she's pregnant or not is pure speculation," which does leave that theory open for now. Even if the character himself wasn't foreshadowing, it could still be the case. We'll have to keep holding our breath, I suppose. I would hate for a reveal like this to damage or set back Sansa's growth as a character. However, Game of Thrones has been particularly impressive with female characters in Season 6, so I have tentative faith that the writers will do right by Sansa in the episodes to come.

More like this
The Trailer For The 'Game Of Thrones' Prequel 'House Of The Dragon' Is Dark AF
By Grace Wehniainen
'Games of Thrones' Fans May Recognise This 'Conversations With Friends' Location
By El Hunt
Oops! The 'Stranger Things' Monopoly Game Has Spoilers For Season 4
By Alyssa Lapid
20 Photos From The 'Stranger Things' Season 4 Premiere To Make You Feel Old
By Alyssa Lapid
Get Even More From Bustle — Sign Up For The Newsletter