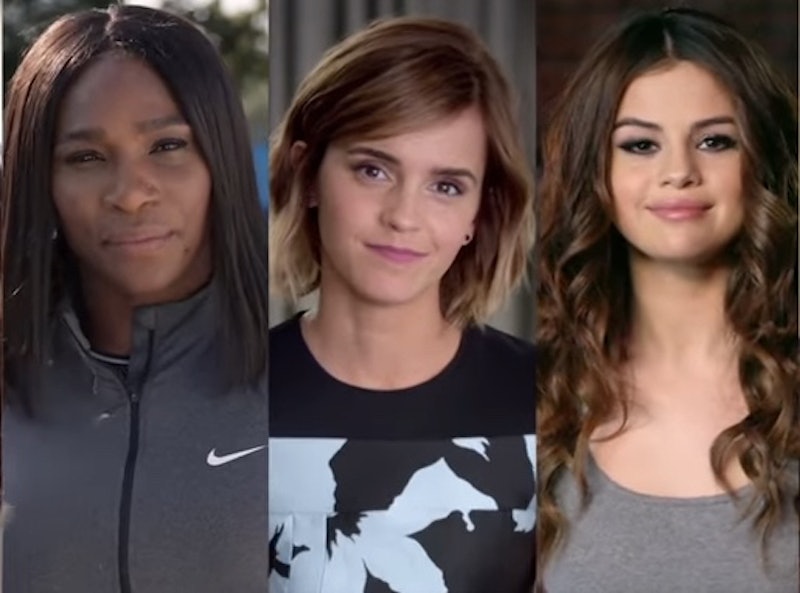 Each year, Sheryl Sandberg's nonprofit organization launches a campaign that focuses on a specific aspect of feminism in the workplace. The 2016 LeanIn.org campaign, Together Women Can, aims to provide practical tips for women about how we can effectively support one another in the professional world. Rachel Thomas, the president and co-founder of LeanIn.Org, spoke with Bustle about the campaign, how women can support one another in the workplace, and her own experiences as a woman in the workforce.

"We’ve watched firsthand as women actively support and encourage each other," Thomas says. "We heard from thousands of women in Circles who talk about the power of peer support and women supporting one another." She notes that many women are already supporting one another and LeanIn.org wants to provide practical advice about how to do this more actively on a daily basis. A large part of Together Women Can is providing women with tips that we can incorporate into our everyday lives. The campaign is accessible — for example, women can head over to LeanIn.org/Together and sign up to receive a tip a day via email or text.

Together Women Can was inspired by the success of LeanIn.org's Circles program, which helps women form small groups that focus on growing their careers. Women who participate in Circles work together to practice skill-building — for example, they'll role play in order to work on things like salary negotiation. According to the website, 85 percent percent of members report that their Circle is responsible for a positive change in their lives.

The campaign is anchored by a video that features familiar faces of successful women from a variety of fields, including Lena Dunham, Selena Gomez, Megyn Kelly, Eva Longoria, Sheryl Sandberg, Abby Wambach, Kerry Washington, Emma Watson, and Serena Williams. They were selected because they embody the spirit of the campaign and its core messages. "They’re all leaders in their fields," Thomas says. "And, they're all women who have publicly supported the campaign's message and are pushing boundaries."

Thomas knows from firsthand experience that the support of other women is invaluable. She credits Sheryl Sandberg, COO of Facebook and founder of LeanIn.org, with being an amazing mentor to her. Thomas also recalls that when she was in her 20s, she founded a startup and one of her clients took the time to mentor her: "I didn’t know exactly what I was doing, and my first client was a woman about seven or eight years older than me," Thomas says. "She was a sounding board for me and she helped me practice fundraising pitches. I credit her with helping a young female entrepreneur make better business decisions."

There are ways we can be allies for our colleagues on a daily basis. For example, as the New York Times reported, multiple studies confirm that women are interrupted more often than men — so women can help by stepping in and asking that the speaker be allowed to finish making her point. Thomas also notes that women tend to get less credit for their accomplishments, which means they have to prove ourselves over and over again in order to get recognition. This is also an area where we can support one another. "Women can really loudly and proudly celebrate one another’s accomplishments," Thomas says. "If you celebrate your own, you can face social pushback. Women can toot one another’s horns very loudly, and we all benefit when we do."

Most women want to support other women in the workplace — but there's also the understandable concern that we may derail our own careers by doing so. Thomas emphasizes that it's a win-win situation because when we help someone else, we establish ourselves as strong, proactive leaders and mentors. "When you step in and interrupt the interrupters or you speak up for your co-workers, your status goes up. You'll be seen as a leader and someone to pay attention to," she explains.

Men who want to be allies to the cause can use similar tactics. They, too, can take notice of when women are interrupted and speak up. And, they can also make an effort to celebrate their female colleagues successes and help ensure that women are getting credit where it's due. Thomas says that men can benefit from being allies to women, too. "Men who work well with women have a competitive edge," she says.

Another important goal of the Together Women Can campaign is to speed up the process of achieving gender parity in the workplace. A 2015 study conducted by LeanIn.org and McKinsey, which sampled 118 companies and nearly 30,000 employees, shows that we're about 100 years away from gender parity. But, that number doesn't have to be set in stone — we have the power to move the needle. "The more women work together, we can help level the playing field," Thomas says. "One hundred years is too long to wait to get equality — but if we work together, we can get further faster."

The campaign is a call to action — if we all make an effort to be allies and mentors, women in all professional fields will benefit.