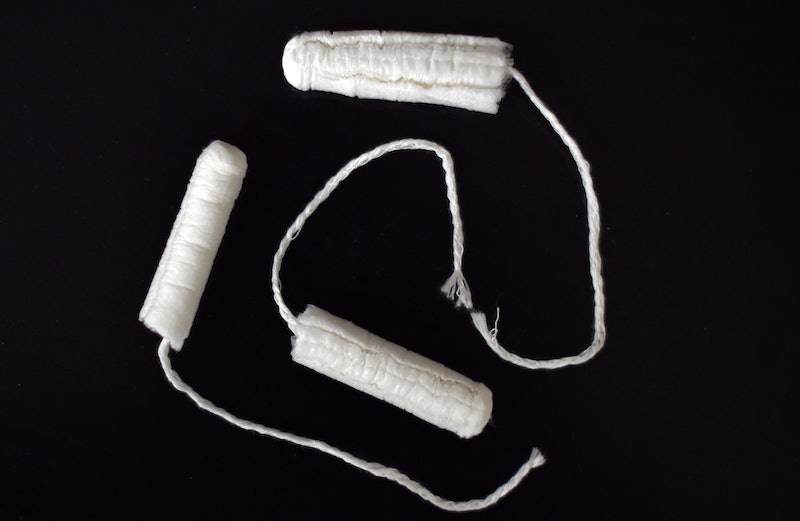 It's safe to say most people who get periods would consider menstrual products medical necessities; if you're not into freebleeding, they're the only thing keeping you from bleeding through your clothes and leaving a trail of red everywhere you go. But if you think the reasons to end the tampon tax are self-evident, you might be giving people without periods a little too much credit. Although the Chicago city council and New York state assembly both voted to eliminate the sales tax on tampons earlier this year, menstrual products are still taxed as "luxury" items in the vast majority of states — which means anyone who gets a period is paying extra for a visitor who comes each and every month, regardless as to whether they actually want the company.

The sales tax added to menstrual products like tampons and pads in most states, aka the "tampon tax," flew under the radar for several decades, but recently, it's received significant media attention as an example of the systemic injustices women face in a patriarchal society. In many countries, items like groceries, diapers, and other everyday necessities are often exempt from taxes in an effort to provide tax relief for low-income populations. Unfortunately, despite the fact that menstrual products are a regular expense for anyone who gets their period, they rarely fall into this category. According to Fusion, most states don't even mention tampons in their tax codes, let alone allowing exemptions for them. (On the other hand, the six states that don't tax menstrual products — Minnesota, Pennsylvania, New Jersey, Maryland, Massachusetts, and New York — deserve so many high-fives.)

It's clear that it's far past time the tampon tax was eliminated, but if you know anyone who needs convincing, feel free to use any of the following arguments.

Periods are weird. Some people get them so regularly they don't have to buy a calendar, while others find that Aunt Flo is rather less punctual than they'd prefer. Generally speaking, though, most people get their period at least once a month, and over time, that adds up incredibly quickly. Menstrual products are already expensive — why add a sales tax on top of that?

You've undoubtedly heard the statistic that, on average, women make 77 percent that which men make in the United States. The pay gap is actually more nuanced than that — Hispanic and Latina women, for instance, make just 54 percent what white men make on average; there's more to the wage gap than gender alone — but the fact remains that women already make less money than their male counterparts for the same amount of work. Taxing women for necessities like tampons just perpetuates a system encouraging economic inequality between gender.

If menstrual products aren't considered essential, then logic dictates they're inessential. So next time you get your period, you can just skip the tampons and let your uterus fly free, right?

Unfortunately, that's not quite how it works. How are you supposed to go to school when you're likely to bleed onto the seats, or go to work when you'd just stain your nice clothes? Although freebleeding is practiced by some, it's simply unfeasible for many people (often due to societal pressures that we have no control over anyway), and that means you're forced to buy menstrual products each month.

4. Tax Exemption Applies To All Kinds Of Other Products

Plenty of items are exempt from sales tax across the country: Cowboy boots, candy, and even Viagra in Wisconsin. What makes those items more essential than menstrual products? (Spoiler alert: They're not.)

5. Menstrual Products Are A Necessity

In the end, it all comes down to one thing: It would be great if the stigma surrounding menstruation didn't exist, but that doesn't change reality. When people who menstruate are still heavily discouraged from even talking about their periods, let alone demonstrating physical evidence of them, products like tampons and pads are a necessity for half the population. Period.

More like this
Amanda Gorman Shared A Powerful Message On Meghan Markle’s Penultimate Podcast
By Darshita Goyal
An Open Letter To The Person Who Bought Steve Jobs’ Birkenstocks For $218,000
By Ginny Hogan
8 Money Saving Experts To Follow For Accessible Advice
By Maxine Harrison
Here's How To Support Jewish People Amid Rising Antisemitism
By Hannah Orenstein
Get Even More From Bustle — Sign Up For The Newsletter