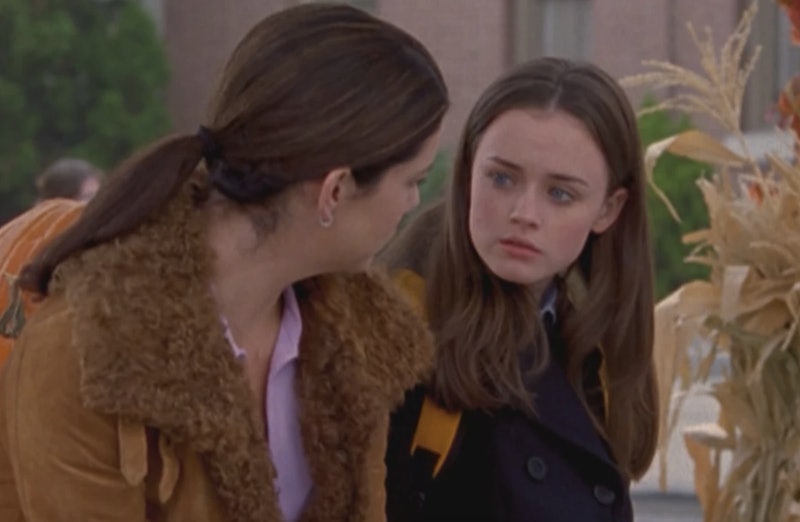 Just when you thought you could relax and settle in for a long wait, there's epic Gilmore Girls news. Namely, the 153 days of Gilmore Girls tweet. But, first, let's rewind. The Interweb already lost their collective mind on June 21, when the Gilmore Girls official Twitter account was established and the first tweet dropped. It was your usual cryptic, messing-with-the-fans-minds type deal — just "La, la, la, la, la" followed by a musical note emoji. But, because it's Gilmore Girls, it got 1.1K likes, because obviously. The Gilmore Girls account could tweet an exclamation mark and it'd still get more likes than that snarky one-liner you spent your whole lunchtime working on. Pundits and fans alike speculated that this would preempt the news everyone's been waiting for, namely the official release date of the upcoming Gilmore Girls Netflix revival.

Then the same Twitter channel released the most cryptic tweet of all cryptic tweets ever. No exaggeration, because, as you can tell, I hate hyperbole. They retweeted a Gilmore Guys tweet (FYI, Gilmore Guys is a popular podcast featuring two dudes just hanging out, talking all things Gilmore, as god intended) which read "For the next 153 days, let’s all tweet our favorite moments from every single episode of the show starting with the pilot. We’ll go first!" and endorsed it saying "Get in on this! #153daysofGilmore" I smell a plot.

The really obvious conclusion to draw is that November 22 (the date 153 days away) is the debut date for the Gilmore Girls revival. On one level, this would make sense: there's been talk of November for the premiere date. But check your calendars: November 22 is a Tuesday, and Netflix premiere dates are typically on Fridays. As huge as a Gilmore Girls revival is, I don't think they'll be changing the rules just for this show.

As a former social media lackey, I'm going to be cynical about this. Lauren Graham, who plays Lorelai, had a book coming out this year that was originally set for a November 22 release. This was then changed to a November 29 release. Lauren has also teased that her book release and the show's premiere would happen "concurrently." I believe that a huge, expensive social media campaign has been orchestrated to run in tandem with the original date of Lauren Graham's book debut.

So, there's no real significance to November 22 now, because Graham's book release date changed. But presumably it was too much administration to completely rejig all the marketing dates. I'd speculate because they've got various bloggers and celebs involved in the media push. But I'd guess that Gilmore Girls: A Year In The Life will drop just a few days later on Friday November 25, perfectly timed for our post-Thanksgiving hangovers.

And doesn't that sound rather nice? So sure, enjoy the fun social media campaign and tweet your best Gilmore Girls moments to #153daysofGilmore. But if you're being Rory-level smart? Mark Friday November 25 in your calendar.