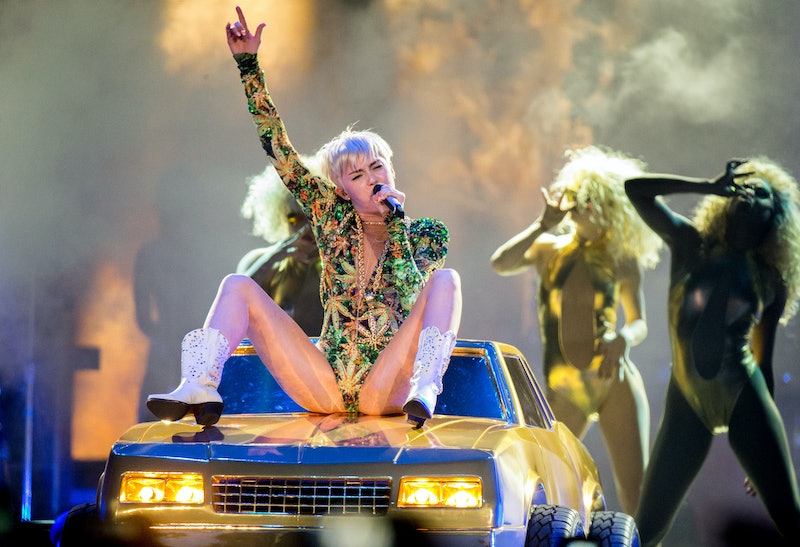 Miley Cyrus is a controversy magnet, and this time, it's her Bangerz tour that's coming under fire. First it was that her concerts were deemed "inappropriate" for children by parents who clearly expected something very different from the former Miss Hannah Montana. Now the Bangerz tour has been criticized for exploiting little people. The show, which features Miley at her wackiest, features a group of little people as dancers, which many critics insist are being used as just another part of Miley's grand spectacle — not as the people they are. According to an interview with Ronan Farrow, Miley has this to say to her show's critics:

[The little people are] just like dancing, doing these cute moves and they're awesome dancers like just on their own. It's not me telling them how to be... we're making them feel sexual and beautiful.

Miley isn't doing anything wrong by featuring little people as dancers in her show — in fact, I think it's great that she wants to include a variety of people in her performances. My problem is her intention, and this time, she's doing far more harm then she thinks she is.

Miley doesn't understand that putting little people in the background of her videos or on stage with her during her performances solely because they are little people is essentially turning them into objects, not unlike the gigantic neon colored bears that also occupy the stage. In fact, one of her dancers spoke out about this very issue after Miley's scandalous performance at the Video Music Awards.

Hollis Jane was asked to perform as a bear in the performance solely because she was a little person. Hollis Jane criticized the VMA performance and its use of little people on her personal blog, saying that she had never been involved in a performance where the sole purpose of her participation was for her to be gawked at.

I was being stared and laughed at for all of the wrong reasons. I was being looked at as a prop…as something less than human.

Miley Cyrus may see her show as harmless fun, but no performance should objectify a group of people for publicity.