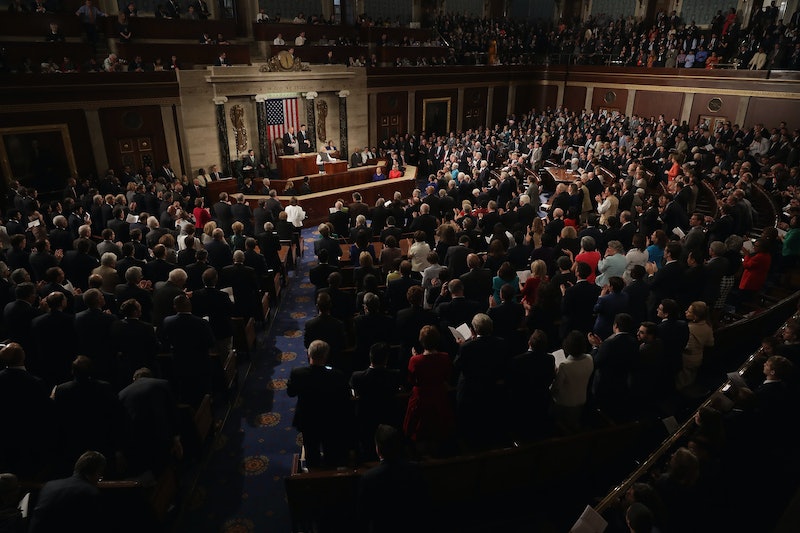 Democratic members of the House of Representatives staged a "sit-in" on the Congressional floor on Wednesday afternoon in response to the repeated lack of action from many members of Congress on the issue of gun control. Unfortunately, for those who wish to view this piece of history, a C-SPAN periscope and social media are the only available methods left to do so — but the photos and videos of the Democratic House "sit-in" are so worth seeing.

The House of Representatives controls C-SPAN's video and audio feeds, as well as camera angles, and Speaker of the House Paul Ryan (R-Wisconsin) felt that since the House is not technically in-session, airing the "sit-in" was not in the House's best interests. A message on Twitter from Ryan's spokesperson AshLee Strong explained, "The House cannot operate without members following the rules of the institution, so the House has recessed subject to the call of the chair."

In response, House Democrats have taken matters into their own hands, broadcasting the live events from the Congressional floor on C-SPAN via periscope from Rep. Scott Peters' (D-California) mobile phone. Other members of the Democratic House are posting images to social media, like Twitter. In a twist of irony, Speaker Ryan's decision not to air the "sit-in" is actually drawing more attention to it.

And it's Sen. Liz Warren's (D-Massachusetts) birthday!? Happy birthday, Liz! Keep up the great work! It's awesome to see senators participating across the house!

Whether this ends in action or inaction, these efforts on the part of 40 members of the Democratic House of Representatives are certainly not unappreciated. It's all over the 'net, so House Democrats can rest assured that at the very least Americans are paying attention.

More like this
17 Powerful Photos From March For Our Lives Protests Across The U.S.
By Michelle Toglia
What Is A “Softboy?” The TikTok Term & Aesthetic, Explained
By Courtney Young
Why Are TikTokers Slapping Each Other With Tortillas?
By Courtney Young
Coastal Granddaughter Is The Latest Summer Aesthetic Going Viral
By Emma Garza
Get Even More From Bustle — Sign Up For The Newsletter