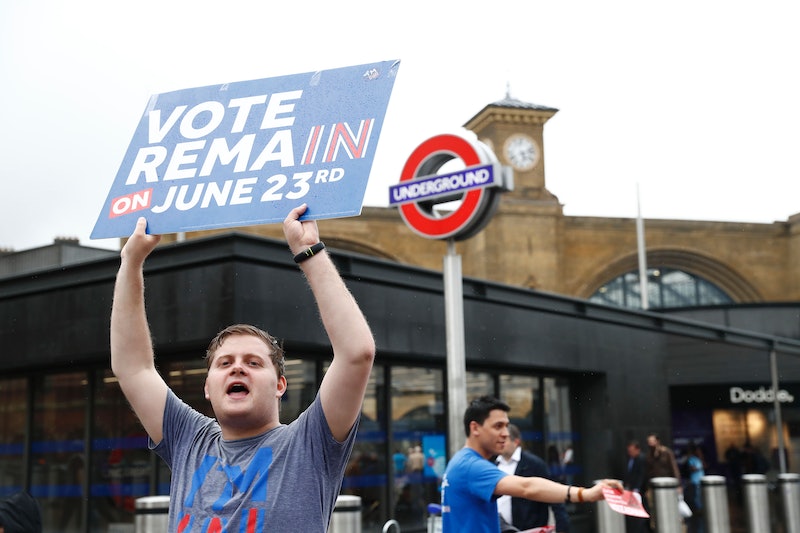 The 2016 U.S. election can seem like a black hole of news coverage, but it's not the only high-stakes election of the year. On Thursday, millions of people in the United Kingdom are voting on a referendum over whether they will remain in the European Union or Britain will exit — or "Brexit," as it's been called. For those of us not living in Europe, understanding the ins-and-outs can be tricky. So here's a guide to why Britain is considering leaving the EU. Update: According to predictions from the major British broadcast networks, Britain has voted to leave the EU.

First: What even is the EU? The quick-and-dirty way to think about it is as a sort of USA-like, except instead of states, it's a union of nations. The 28 member countries agree to open their borders to other EU members, share a common market, and abide by various social and political policies. This is slightly different from the Eurozone, which created a common currency for 19 of the 28 member countries. So it's really more like USA-but-not-as-much-and-also-way-more-complex. Opinion polls leading up to Thursdays referendum have been nail-bitingly close — and may have big economic repercussions. Last week, when one poll showed voters leaning toward Brexit, the pound sterling briefly tanked.

So why do some Britons want out? There are three main issues: economics, immigration, and identity.

The economics issue is that the U.K. sends money to Brussels (the HQ of the EU), which then gets redistributed to the various other member states. The arguments of those in favor of Brexit — the Leave campaign — sound similar to Americans who complain about national funding which goes to programs like the National Endowment for the Arts. "Why should we have to pay for that?" The Remain campaign, on the other hand, argues that leaving the EU (and its common market, in which Britain can sell goods to all EU states under favorable terms) would wreck the British economy, and possibly the world economy.

The immigration controversy follows similar lines, but is way more charged. Any citizen of an EU member state can relocate and work in the U.K. without needing a work visa. Most economists agree that this is good for the economy, but right-wingers complain that non-U.K. citizens are coming in and using up already-scarce public resources, like the National Health Service and welfare. Anyone who's been engaged in America's immigration debate will find this familiar, especially all the implicit racist overtones. Indeed, Nigel Farage, leader of the far-right United Kingdom Independence Party (UKIP), could give Donald Trump a run for his money in the outrageous remarks department.

But perhaps most importantly, people in the U.K. don't generally see themselves as European, and the question of British identity within the EU is a complicated one. As a member state, the U.K. must abide by various EU policies, some of which can seem ridiculous or overly constricting, like rules on bananas and pet horses.

The Leavers argue that Brexiting would allow the U.K. to take control back over its laws. And while many (including John Oliver) have countered this argument by pointing out questionable claims by the Leavers, the Remainers don't seem to have a good answer for the more abstract question over what it means to be British. Indeed, "Make Britain Great Again" wouldn't feel out of sync with the Leave campaign's rhetoric.

Perhaps most interesting of all is that, fundamentally, the U.K. and the U.S. are asking similar existential questions. In a world with greater movement of people and goods and ideas, what do borders and nations and citizenship mean? And, most crucially, what is our responsibility to one another?

More like this
It’s Official: The UK Is Hosting Eurovision 2023
By Sam Ramsden and Rachel Mantock
Where Was 'The Bachelorette' Season 19 Filmed? More European Destinations Are On The Way
By Radhika Menon
Expert-Approved Hacks For Packing A Carry On
By Jessica Goodman
The 12 Best Road Trip Accessories
By Megan Gray
Get Even More From Bustle — Sign Up For The Newsletter