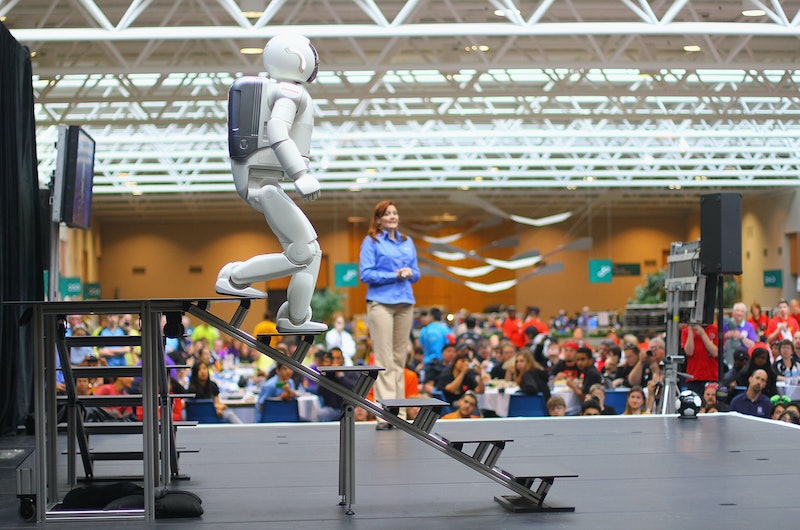 Remember watching The Terminator as a child and thinking,'Man, wish I could have me one of those bad boys'? Well now, thanks to science, you got it! Kind of.

On Thursday, a Pentagon-financed humanoid robot called "Atlas" was unveiled at the office of Boston Dynamics.

The six foot tall machine—which was created for a US Defence Advanced Research Projects Agency (DARPA) challenge—has two fully-functional hands, complete with fingers and opposable thumbs, a head with stereo, visual sensors, and real-time control computer. It can also deal with unexpected trip hazards without being knocked off balance, even by a 20-pound weight. In other words, it could definitely kick some ass.

The DARPA Virtual Robotics Challenge is aimed at creating robots that can help in disaster situations, like the recent floods in India, or the deadly Arizona wildfire. Competing teams of engineers are expected to program their machines to do things like open doors, flick switches, travel over rough terrain, and operate heavy power equipment. And they'll have five months to make a version of Atlas that can drive a car, climb a ladder, and connect a fire hose. No big deal.

The incentive (other than the mind-boggling actual product, that is)? A prize worth a hefty $2 million.

According to an artificial intelligence specialist, “a new species, Robo sapiens, are emerging.” Dah-dah-duuum.