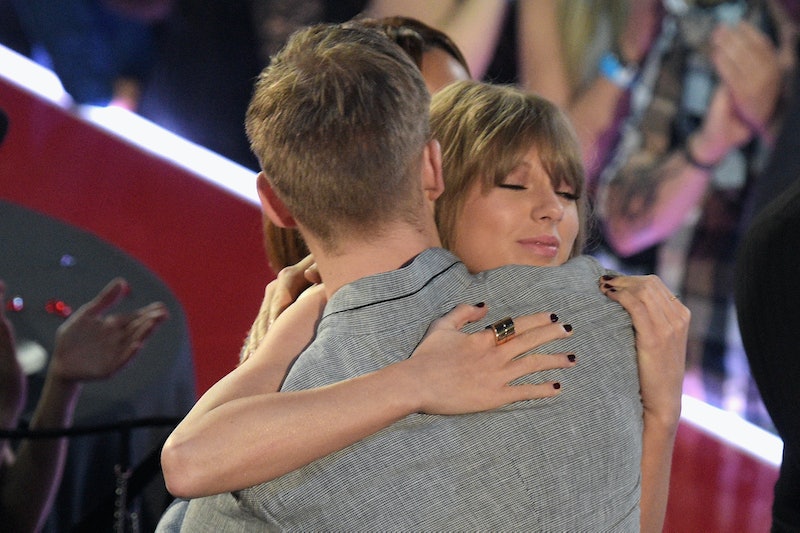 What is happening?! Just mere hours after it was reported that Calvin Harris had refollowed ex-girlfriend Taylor Swift on Instagram (after unfollowing her on the social media platform in the wake of their highly publicized break-up earlier in June), E! Online is now reporting that Harris may have called Swift out in a series of Instagram comments directed at fans of hers — with alleged screenshots of the comments even insinuating that Harris may have written things like "Not jealous sir, FREE," referring to their break-up.

Of course, these screenshots are in no way confirmed to be legit, so I'm still choosing to take them with a grain of salt. If the comments were ever real, they're no longer present on Instagram, suggesting they were deleted, or, simply, that these screencaps were doctored. But, that doesn't change the fact that they include a lot of jaw-dropping stuff regarding the exes' relationship.

According to the unconfirmed screencaps, Harris allegedly responded to Swift's fans — who were all, reportedly, asking him about the relationship — with things like, "[Taylor] controlled the media and this situation, I had no idea what was going on. So that kind of makes it a lot worse from my perspective," and (in response to a fan allegedly asking why he unfollowed then followed Swift again), "I cared too much and then I didn't care at all. I am a real person remember."

But, the alleged comments do paint a sort of fascinating picture in the sense that, yes, these are two people going through a break-up, just like any of their fans could be — yet, due to their jobs, they're having to do it all in the public eye. Even if the comments aren't real, the fact that they sort of make that realization hit you is important in and of itself: No one should ever lose sight of the fact that both Harris and Swift are real people who have feelings. Break-ups are often messy, and never easy — Harris and Swift's, I'm sure, is no different.

Bustle reached out to Harris' publicist in response to the rumored comments and the alleged screencaps, but has not yet heard back.