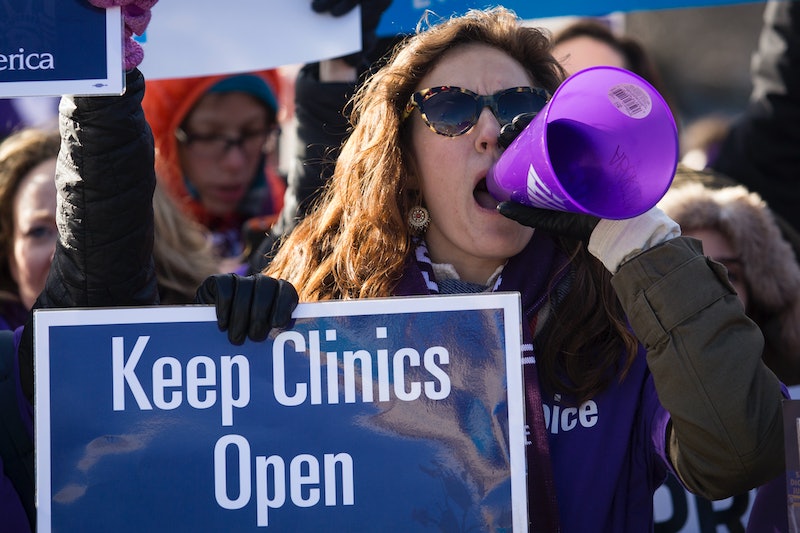 Hold onto your hats, people with uteruses. On Monday, June 27, yet another landmark decision on abortion will be released by the Supreme Court. So, what is the Whole Woman's Health case? In Whole Woman's Health v. Hellerstedt, the eight U.S. Supreme Court justices will determine the constitutionality of a Texas law that, according to the medical caregivers arguing against it, has the potential to shut down nine out of every ten abortion clinics in the state.

Whole Woman's Health is a case that exists, in part, because of certain ambivalent areas in previously decided cases concerning abortion rights. While Roe v. Wade affirmed a woman's right to choose to have an abortion, under a constitutional right to privacy, it left abundant room for states to intervene. Specifically, it never barred individual states from creating legislation that places targeted restrictions on abortion providers; Planned Parenthood has labeled these state-level restrictions as being "under the guise of 'women's health'" even though they make it harder for a woman to access reproductive healthcare.

Passed in Texas in 2013, House Bill 2 (HB2) is one of the pieces of sneaky state legislation that critics call TRAP laws, which stands for "targeted regulation of abortion providers." According to organizations like NARAL Pro-Choice America, these laws that were "designed to close clinics and make abortion care more expensive and difficult to obtain."

...Doctors who provide abortion services must obtain admitting privileges at local hospitals no farther than 30 miles away from the clinic; and every health care facility offering abortion care must meet building specifications to essentially become mini-hospitals (also known as ambulatory surgical centers, or ASCs).

Planned Parenthood calls HB2 a "draconian anti-abortion law" that has "already devastated access to safe, legal abortions in Texas," and warns that Whole Woman's Health is the "most important abortion rights case in decades."

Fortunately, the Supreme Court's 1992 decision in Planned Parenthood v. Casey calls the legality of these standards into question. In its decision, the Supreme Court affirmed that laws that placed an "undue burden" on a woman's right to choose were not legal, referring to things like "unnecessary health regulations" that made it substantially harder for women to access abortion care. The decision in Whole Woman's Health will largely hinge upon how the definition of "undue burden" is interpreted.

According to the clinics challenging it, upholding the Texas law in Whole Woman's Health would endanger women's health much more than it would protect it. Without access to professional centers, thousands of women may be left to resort to desperate measures, and deal with the potentially fatal side-effects. Justice Breyer argued this point poignantly, reminding the court of research that says "if you lead to self-induced abortion, you will find many more women dying," then asking that "if the concern is this tiny risk of dying through a complication in a clinic, is [the Texas law] a remedy that will in fact achieve the legislature's health-saving purpose?"

When the Whole Woman's Health case was heard in March 2016, the Supreme Court Justices appeared to be divided, according to The New York Times. The liberal leaning judges — Justices Sonia Sotomayor, Ruth Bader Ginsberg, Elena Kagan, and Breyer — insisted that HB2's regulations fell under the definition of "undue burden." While the conservative justices argued over sufficiency of evidence, Justice Kennedy suggested he needed more information.

Returning the case to lower courts to gather this information would leave the Texas law in effect, and likely result in the closing of at least 10 more clinics. Additionally, if SCOTUS' deliberations result in a 4-4 tie, as many suspect may be the case, the terms of appellate court's previous decision would stay in place, and HB2 would remain (pretty much) the law of the land.

More like this
How Getting An Abortion Has Changed From The ’60s Through Today
By Amanda Chatel
34 Quotes That'll Inspire You On Juneteenth & Beyond
By Syeda Khaula Saad and Siena Gagliano
Supreme Court Overturns Roe v. Wade
By Melanie Mignucci
Why You're Seeing Green Bandanas At Abortion Rights Protests
By Lexi Inks
Get Even More From Bustle — Sign Up For The Newsletter