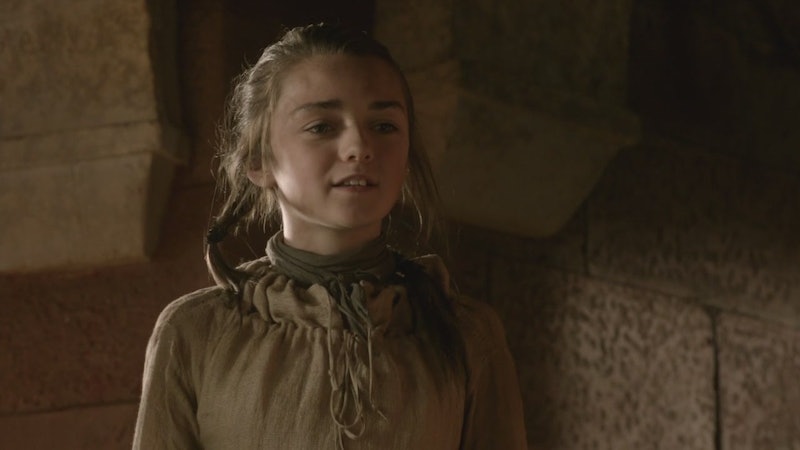 Despite the fact that she's sort of a ruthless, bloodthirsty little preteen, there's something curiously lovable and compelling about Arya Stark. I'd argue this is down to her sharp wits and even sharper sword, though, because the amount of times that Arya outwits everyone on Game Of Thrones suggest that we, as an audience, are being prompted to respond with a specific reaction to the character. We may not always endorse her decisions, but we're encouraged to develop a healthy respect for her.

Arya occupies unique territory on Game of Thrones and is probably the only other female character on the show, aside from Margaery, who we're trained to see as being able to thrive under near-impossible circumstances. Sure, Game of Thrones is full of strong female characters like Cersei, Daenerys, and Sansa, but, by so constantly outwitting everyone around her, Arya is on a totally different level. Somehow, with the youngest Stark girl, we're given more hope that she might make it to the end of the show alive. It's tribute to her immense wit and cunning. So without further ado, let's review the moments Arya outwitted everyone else around her.

1. Arya Throws Food In Sansa's Face To Distract Her From Joffrey

Sansa is flirting with Joffrey by making puppy eyes at him from across the table, and when Arya sees, she flicks some food in Sansa's face. Arya was the first character to realize exactly how awful Joffrey was, and while the dinner-flicking didn't avert her sister getting tangled up with him, it was a strong effort to put a dampener on their romance.

Sure, Arya has some help from her wolf, but this is still impressive given that Joffrey's a future king and presumably has been trained in the art of fencing since he was a toddler. Also, smart move on Arya's part to chuck Joffrey's sword in the lake — she clearly already senses Joffrey's skill at exacting revenge.

Get it, girl. Showing off banter that's as razor sharp as her prized sword.

4. Arya Lets Yoren Cut Her Hair Off And Disguise Her As A Boy

Arguably Arya's smartest ever decision. She's so much less obvious as Ned Stark's child as just another smudge-faced little boy.

5. She Managed To Fool Tywin Lannister At Close Quarters

Speaking of Arya's commitment to pretending to be someone else, remember when Arya was forced to be Tywin Lannister's cupbearer? Tywin Lannister is nobody's fool, and while he sensed Arya was highborn, he didn't get to the bottom of the mystery. Hats off to Arya for managing to conceal the secret of her identity under such intense pressure — namely, getting close to the man who wanted her father dead.

6. Gives Jaqen His Own Name When He Asks Her Who He Should Kill

Jaqen promises Arya he will kill a person for her, but incenses her when he admits that while he can kill Tywin Lannister who is heading up north to murder Robb Stark, he can't promise to do so immediately. In revenge, Arya gives Jaqen his own name — he is bound to kill himself. Arya promises to unname him if he's able to break her and her friends out of the fortress. Smooth moves, Stark.

7. She Retrieves Her Sword In The Most Stylishly Brutal Way Possible

In Season 2, Episode 3, Polliver takes Arya's sword from her ("That’s a fine little blade, maybe I’ll pick my teeth with it") and uses it to kill Lommy, an injured boy who asks the soldier to carry him. When Arya comes across the same soldier in Season 4, Episode 1, she retrieves her sword, recites the very words he said to Lommy back at him, and then finishes with the tooth-picking line. On saying the line, we see the soldier's eyes darken in recognition — but it's too late. Arya's sword is through his throat.

8. She Exacts Revenge For Her Family

When Robb Stark and his direwolf Grey Wolf were both assassinated in the Red Wedding scene, there's added insult to injury — the wolf is decapitated and the Frey soldiers sew the wolf's head onto Stark's body. When Arya Stark happens to ride past a Frey soldier bragging about committing this disgusting act to impress his fellow soldiers, we know he's toast. Arya Stark asks if she can join them at the fire, and when they're rude to her, she offers to pay for the pleasure and drops a coin on the ground. When the soldier goes to retrieve the coin, she takes advantage of his vulnerable position to commence stabbing him repeatedly.

9. Also, She Did It All With The Hound's Knife

Arya's act of brutality forces the Hound to step up and murder the other soldiers round the fire. At the end of the scene, he asks her where she got the knife from. "From you," Arya says, as if it's the most obvious thing in the world. Yep — she's as good a pickpocket as she is a swordsman.

Arya Stark's got a sharp memory and an even sharper sword.

11. She Leaves The Hound To Die

Sometimes the smartest move requires a Plan B. Sure, the Hound's a name on Arya's kill list, but she's willing to make an exception to intensify his suffering. As the Hound tries to provoke her into killing him, she (ahem, almost) gives him a far nastier death than a quick stabbing would and leaves him to a slow, painful expiration, making sure she swipes some silver first.

When Arya trains to become "no one" and is encouraged to dispose all the possessions that mark her out as Arya Stark, she's smart enough not to throw away all her options by chucking her sword into the ocean. Instead, she conceals it behind a rock. As we'll discover later, this is one of the smartest things she ever could have done in this situation.

The waif, to some extent, feels like a nightmare double of Arya, with her same cropped haircut and ruthlessness with a sword in her hand. So in order to defeat her, it makes sense that Arya used the only quality she possesses that differentiates her from the Waif — her ability to fight in the dark. When she lures the Waif into the catacombs where her sword is, the girl is disdainful — she knows she's the better fencer. But Arya uses the sword to cut off the top of a candle and the room's plunged into darkness.

Since former friend Jaqen is the one to have ordered her execution, Arya's understandably keen to play him at his own game. Thus, as the ultimate revenge, she places the Waif's cut out face where her own should be in his creepy Hall of Faces. Revenge never tasted sweeter.

So, let's all bow to Arya Stark. She's tiny and terrifying and there's nobody more mighty in all of the seven kingdoms.