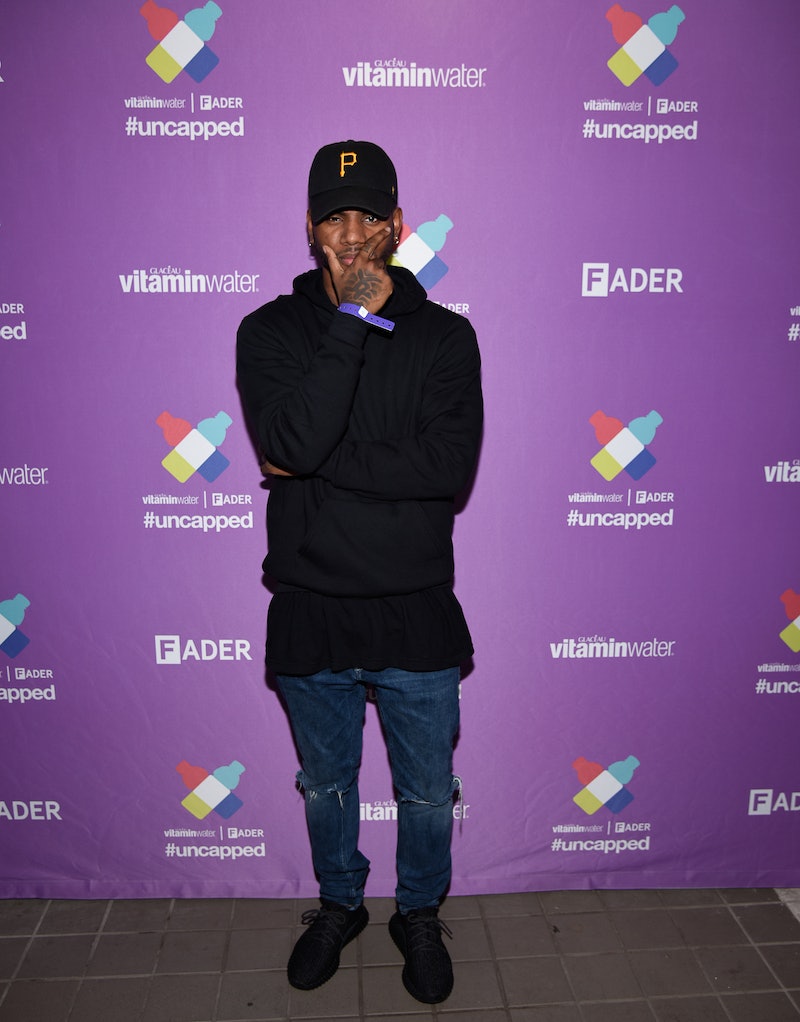 He just released his album T R A P S O U L in October, but new artist Bryson Tiller is already being called the next Usher (though he doesn't want to claim that title). The Kentucky native is nominated for four BET Awards, including Best New Artist. And the singer-songwriter had a banner year: his single "Don't" first blew up on Soundcloud and soon after became a Top 40 hit almost overnight.

T R A P S O U L owes a lot of its appeal to Tiller's tender lyrics that are reminiscent of that sexy 1990s R&B we all miss, with trap and hip-hop influences that have made him a star in a hot minute. He's got huge friends in the game, and he's had his fair share of being down on his luck before reaching the very top. He's even, in such a short time, launched some memes, which is a success by any measure. His vulnerability is what's differentiating him, along with his sound, and his way of "talking to women" in his songs, as he told Fuse.

But just who is this dude? Here are nine thing to know about Tiller, because you're going to be seeing a lot more of him soon — especially if he wins big this Sunday at the BET Awards, where he is also taking the stage to perform.

Tiller is making his way up in the game with his debut album charting in the Top 10 of the Billboard Top 200 chart, so you might be surprised that the he is only 23 years old.

2. He Has A Beautiful Daughter

Tiller has a daughter named Harley, who he's devoted to fiercely. Most of his Instagram posts are photos and loving captions about his her, and that is just fine by me.

3. He Struggled A Lot Before Making It Big

Tiller has come a long, long way: according to Vibe, just two years ago he was sleeping in his car and working two jobs, at Papa John's and UPS, to make ends meet and support his daughter while he was making music.

4. He Sings A Lot About His Love Life

Tiller has hit a sensitive chord, since a lot of his songs on T R A P S O U L are about being in relationships, wanting to be in relationships, and wanting to be a better man. And it's resonating. He told Fuse that men have actually come up to him at shows and told him: "'Man, you're helping me just be a better man to my girl.' [My music] makes them talk differently to their women, [and] that means the world to me," he says. "I've had a few people come up to me and say that I saved their relationships." "Exchange" is a song that gets right into that, starting off with Tiller singing, "When I think about you, I get in my feelings."

Tiller is proud of his hometown in Kentucky, and in his song "502 The Comeup" he says he's the hottest thing since the late, great Muhammad Ali, another Louisville native.

6. Drake Is Among His Close Friends

Drizzy tried to sign Tiller to his label OVO back in October (Drake's fav month), but Tiller had already signed with RCA, and chose to stay with them. No bad blood, though; Tiller calls Drake his "big brother" and said in an interview with Hot New Hip Hop, said that Drake was the only person whose opinion on his music mattered. Awww.

In an interview with The Boombox, Tiller talked about his friendship with artist Kehlani and how they feel like kindred spirits because they're both up-and-coming, prompting a comparison from a galaxy far, far away: "Me and Kehlani both like Star Wars so like she calls me Luke and I call her Leia because we’re both like the chosen ones it feels like.

8. Speaking Of... He's Been Called The Next Usher

His single "Don't" was one of the first to inspire these comparisons, because the sexy song was a vulnerable conversation with a girl that felt very Confessions-like. But Tiller doesn't want that much praise: "I don't like to hear people say I'm better than anybody, especially when they compare me to people who have tons of classic albums," he told Fuse. But! He did say that he wanted to make a Confessions type of album, where, you guessed it, he wants to "confess everything."

For a lot of reasons, but mainly because Kanye West is a dad, too. "He’s just, he’s a father. He’s out here getting it. And he recently tweeted something like 'Do everything you possibly can in one lifetime' and I was just like, you’re right," Tiller told The Boombox.

Catch Tiller performing this Sunday at the BET Awards in a killer lineup that also features Future, The Roots, Alicia Keys, D'Angelo, and even Usher.