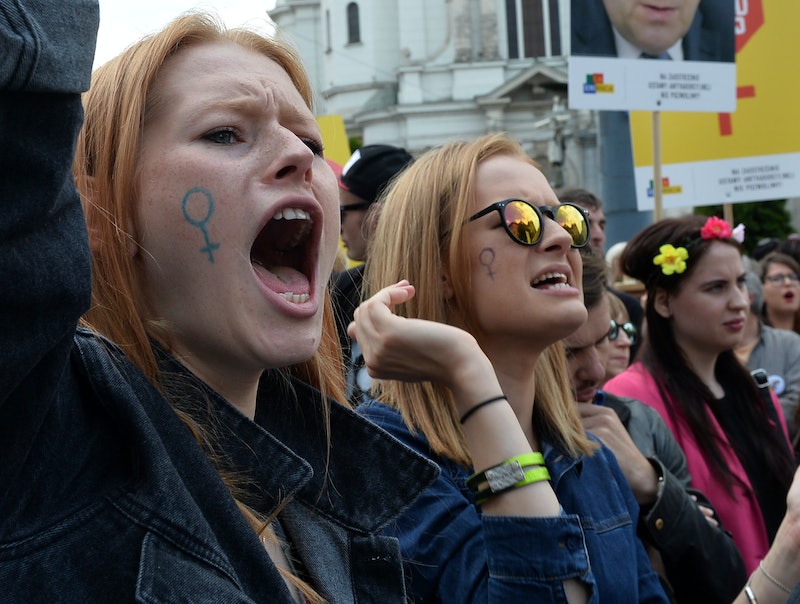 When Monday's long-awaited decision came down in Whole Woman's Health v. Hellerstedt , the first major abortion case to reach the Supreme Court in the land in over 20 years, I can’t tell you how relieved I felt. In a 5-3 vote, the Court overturned Texas House Bill 2 (HB2), which required abortion clinics to meet the same standards as ambulatory surgical centers, and for abortion doctors to have admitting privileges at a hospital within 30 miles of their clinic. Architects of the law claimed it protected women’s safety. Many clinics, doctors, women’s healthcare providers, and patients said that it violated the standard set in the 1992 case Planned Parenthood v. Casey , which reaffirmed the essential holdings of Roe v. Wade, including that “women have the right to choose to have an abortion … without undue interference from the State.”

Pro-choice critics (myself included) argue that the real intent of the law was to shut down clinics across Texas, and in that it has succeeded. Texas lost at least 21 clinics in three years, and thousands of women lost access to necessary services. Researchers at the Texas Policy Evaluation Project, which is connected to the University of Texas, concluded that "Given the increased obstacles to seeking abortion care in Texas, coupled with the drastic reduction in open abortion facilities, it is possible that more women may consider or attempt self-induction."

As a former abortion clinic volunteer, I am deeply grateful that the Supreme Court recognized that HB2's stipulations provided "substantial obstacle in the path of women seeking a previability abortion" and "constitut[e] an undue burden on abortion access."

There isn’t a whole lot I can relate to about being from Texas. I grew up in Buffalo, New York, a short drive from Canada and a long way, both geographically and culturally, from the South. What I do have in common with Texans is growing up in a climate that’s deeply hostile to abortion. My best friend’s mom was a counselor at a local abortion clinic in the 1990s, when I was in high school. As teenagers, my friend and I volunteered there on weekends. The clinic is on an ugly stretch of Main Street, across the street from a large concrete building with a wide, flat roof. Because the staff regularly receive death threats from anti-abortion extremists, the police are occasionally sent to check the roof for snipers.

The clinic attracts a lot of protesters. When I first started volunteering there, I was told that they couldn’t come within a certain distance of the clinic’s doors. So when a man approached and started speaking to my friend and me one day, I wasn’t alarmed. At least, not until, after a routine series of questions about what we were studying in school, he suddenly started calling us whores and asking us when we’d had sex for the first time. This went on for several minutes while my friend and I, stunned and terrified, looked around for help. Eventually a clinic worker showed up and sent our antagonist packing. It turned out he was a member of an extreme anti-abortion group that was quite active in Buffalo in the '90s.

Then, in October 1998, when I was 16, Dr. Barnett Slepian, a Buffalo obstetrician who performed abortions at the clinic where I volunteered, was shot to death in his kitchen by an anti-abortion zealot. He and his wife had just returned from synagogue. His four young sons were home at the time of his murder. My friend and I both recall returning to volunteer at the clinic after Dr. Slepian’s murder. Our youth, anger, and sense of righteousness must have kept our fear at bay.

Dr. Slepian’s murder was awful for his family and horrifying for those who knew him. But helping out at the clinic was a positive experience. In volunteering, I got to spend time with my friend and her mother, and our shared ideological commitment brought us even closer. One day, a woman paused on the sidewalk and thanked us for being there, and I felt for the first time the pride of participating in a social movement, of working on behalf of a cause that was larger than myself. I regret not learning more about the women who came to the clinic seeking abortions. It was a fraught environment, and I didn’t want to violate their privacy. Back then, it felt like enough to simply stand beside them.

Even though the Supreme Court thankfully struck down the onerous stipulations of HB2, I fear that anti-choice legislators and and activists will continue to seek out new ways to block women from obtaining abortions. Time and again, we see that Supreme Court rulings do not deter those determined to limit reproductive rights. Therefore, here’s what I want to say to the creators of HB2 and similarly terrible laws around the country: You can try to shut down all the abortion clinics in Texas. You can try to drive abortion even further underground. You can try to inconvenience, seriously harm, and even lead to the deaths of so many women by making abortion prohibitively difficult to obtain. But you can’t stop women from wanting, needing, or having abortions, and you can’t stop us from helping each other get them — whether that means learning how to perform a safe abortion (which you don’t have to be a medical doctor to do), stockpiling the abortion pill (which I and a number of female friends have done), or tracking down a referral and accompanying a sister, friend, or even a stranger to get one.

Nor can you stop people of faith and conscience — men like Dr. Shalom Press, Dr. Willie Parker, and dozens more like them — from ministering to vulnerable women in their hour of need. People have always helped and will continue to help those in need to end unwanted pregnancies, whether or not the law is on their side. Monday's Supreme Court ruling is good news for the women of Texas. But Americans from all 50 states are ready to defy laws that prevent women from living as they choose.