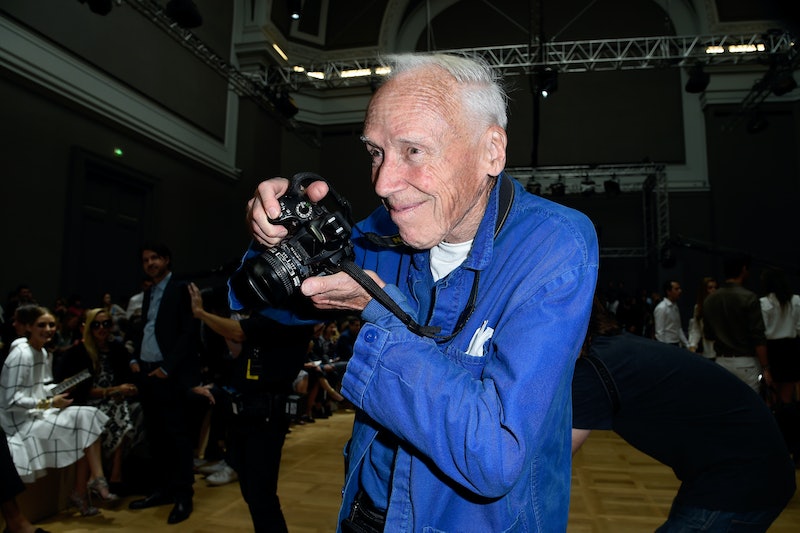 Some people collect trinkets from around the globe, some people collect clothes, but this man collected moments in time, captured, of course, in the form of a photograph. Bill Cunningham passed away at the age of 87 on June 25, and these photos of his life will prove that getting dressed was so much more than simply putting on clothing. Instead, it was a way of life.

Cunningham is known as the fashion photographer for The New York Times. He was hospitalized after having a stroke, and his death has been confirmed to The New York Times. In his nearly 40 years with the publication, he captured streetwear fashions on camera. Anna Wintour said in a documentary about Cunningham, “I’ve said many times, we all get dressed for Bill.” He on the other hand, had a very set uniform. It was what other people were wearing that interested him.

He’s known for his wardrobe, which consisted of a blue workman's jacket, a pair of khakis and black sneakers. As these photos will demonstrate, you’d hardly find him wearing anything else. Whether he was on the side of a runway or just out and about on the streets, the man in the blue jacket was always on the hunt for fashion.

It's safe to say that Cunningham had major FROW status.

But, no one was exempt from getting caught by his lens.

At every major fashion week or event, you could find him with his camera and his blue jacket!

On rare occasions, he'd wear a tux, if necessary.

Of course, he'd have to get all dressed up to hang around the biggest celebrities.

He was always searching for the best angles.

The hustle and bustle of the city was no match for him and his lens.

If he had to dress up his blue jacket, he'd add a red tie to complete his look.

Everything around him was moving, but he stayed still. Just to capture one incredible fashion moment.

The weather couldn't stop this man from doing his job. As you'll notice, a blue poncho was all he needed on rainy days.

A thicker blue jacket was the only addition to his wardrobe during the winter months.

Watching design after design come down the runway is when he was truly in his element.

You know an outfit's all about the shoes. He's got the best view from down there!

Although, I'd imagine that each and every outfit he photographed was special to him.

Can you imagine how incredible it must be to get to pose for Cunningham?

It's hard to capture this man without a camera strapped to him.

I'm sure he always had to be prepared because you never know when you're going to stumble upon a fabulous outfit.

Fashion is always on the move. But, so was he.

You never knew when you might be photographed by him. But if you were caught on his camera, let me tell you, you're quite lucky.

Being quite the fashion photographer, he had access to all of the best events.

When it comes to fashion photography, he was the best of the best.