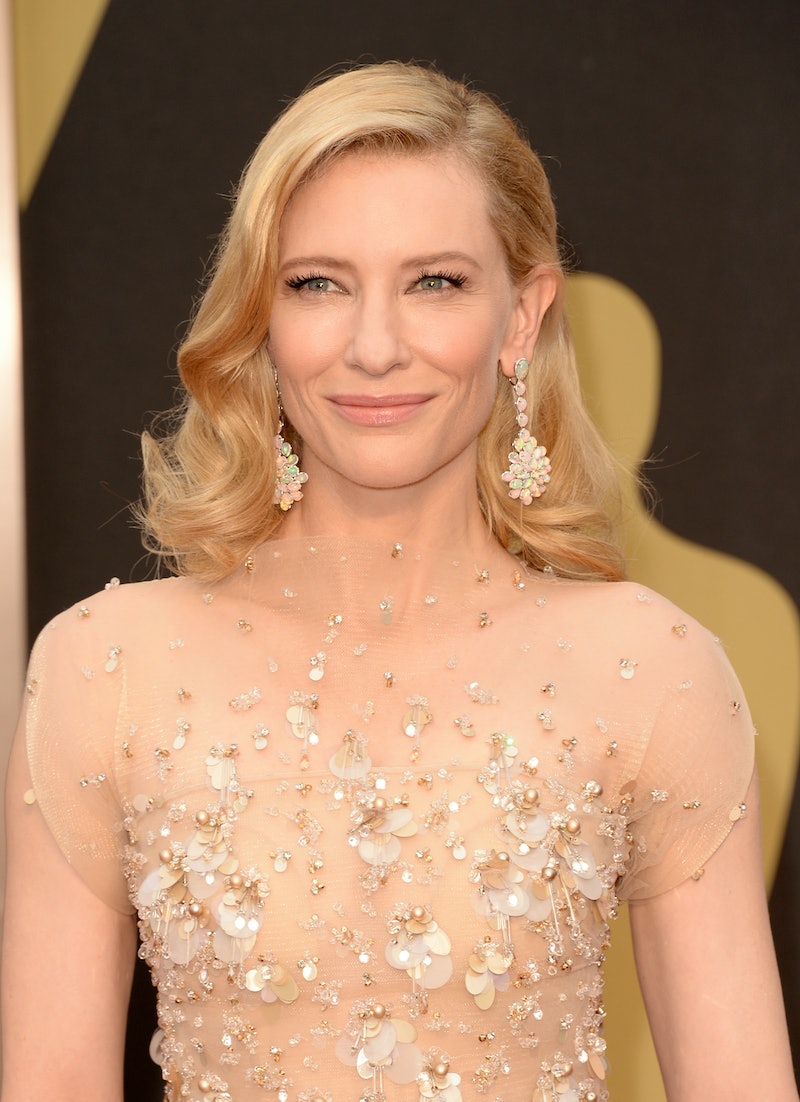 Four previous Oscar winners and one five-time nominee made up the 2014 Academy Awards' ultra-competitive Best Actress race. (Three-time winner Meryl Streep, who racked up a staggering 18th nomination this year for her work in August: Osage County, is no doubt running out of space for awards on her mantel.) Having already won the Golden Globe, SAG Award, and BAFTA, the stage was set for previous Best Supporting Actress winner Cate Blanchett to take home her second Academy Award for her whirlwind performance in Woody Allen’s Blue Jasmine. So when Daniel Day-Lewis opened the golden envelope tonight and read the actress’s name, no one in the Dolby Theater batted an eye. But audience members and viewers at home alike were waiting with baited breath to see if the newly crowned winner would mention director Woody Allen in her acceptance speech, in light of recent allegations that he sexually molested his adopted daughter, Dylan Farrow. Blanchett thanked Allen while accepting her Golden Globe and SAG Award, but not her BAFTA.

While Blanchett looked pleased with her win, she also looked a little relieved (perhaps that this lengthy award season is finally coming to a close). And yes, she did briefly thank Allen in her speech for casting her. Blanchett also thanked the Academy, her fellow nominees (addressing each woman individually), and her family. In the middle of her articulate but somewhat lengthy speech, Blanchett took time out to thank Blue Jasmine's audiences and to address a particularly maddening injustice in the movie industry today in a memorable and totally awesome way:

To the audiences who went to see it and perhaps those of us in the industry who are still foolishly clinging to the idea that female films with women at the center are niche experiences, they are not. Audiences want to see them and in fact, they earn money. The world is round, people!

Blanchett wins her second Oscar for her role as Jasmine in Blue Jasmine, a disgraced Manhattan socialite who is forced to start all over again with her sister in San Francisco after her wealthy husband is exposed as an investment fraudster. The film has been compared to Tennessee Williams' classic play A Streetcar Named Desire and Jasmine has been called an "updated version" of Blanche du Bois.