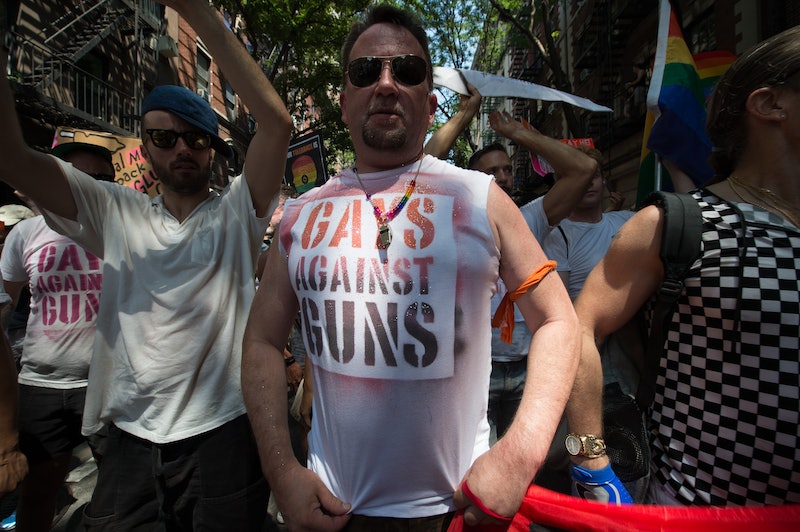 LGBT activists who want stricter gun laws seized the day at New York City’s Pride March on Sunday, staging a “die in” on 5th Avenue to draw attention to anti-gay gun violence. But the ‘Gays Against Guns’ Pride demonstration was much more than a one-time thing. It was work of an entirely new advocacy group, founded in the wake or the Orlando shooting and dedicated to stopping “the life-threatening convergence of homophobia and flawed gun policies.”

Gays Against Guns, or GAG, was formed a week before the pride parade, not long after 49 LGBT Americans were killed in the deadliest mass shooting in US history. The group is still “figuring out our place in the larger pre-existing gun control movement,” according to a post its Facebook page, but its website lists a couple of specific policy demands: A ban on assault rifles and high-capacity magazines, more thorough background checks for gun purchases, and elimination of the gun show and Internet sales loopholes.

“We know that several groups have been fighting gun violence in the U.S. for decades now,” group co-founder Kevin Hertzog said in a press release. “We’ll be meeting after Pride to hash out positions and a strategy approaching the November 2 elections. But for now, we want to present as large a crowd as possible on Sunday, to show New York and the U.S. that LGBTQ people are outraged. The current situation with guns in America makes us gag in disgust!”

The group saw an enormous turnout when it unveiled itself during Pride weekend, and drew praise from NYC Councilman Corey Johnson.

“Gays Against Guns is taking this fight to the NRA’s front door,” Johnson said in a press release. “Our community has been fighting for gun control as part of other organizations for many years, now we’re starting our own. The LGBT community has vanquished bigger enemies than the NRA.”

GAG didn’t return Bustle’s request for comment. But it’s notable that, for the time being, the group appears to be focused on changing gun laws, not policies that tackle LGBT equality. That makes sense: While the LGBT rights movement has enjoyed enormous progress over the last five years, both in terms of policy and public sentiment, advocates of stricter gun laws haven’t been nearly as lucky or successful. Last week, Senate Republicans blocked an attempt by Democrats to bar suspected terrorists from purchasing guns, but this was only the most development in a long, long trend of legislative inaction on firearms.

LGBT Americans are more likely to be the target of hate crimes than any other minority in the country. It was probably only a matter of time until a group like GAG came into existence, and the NYC Pride march was the perfect place to make its public debut.