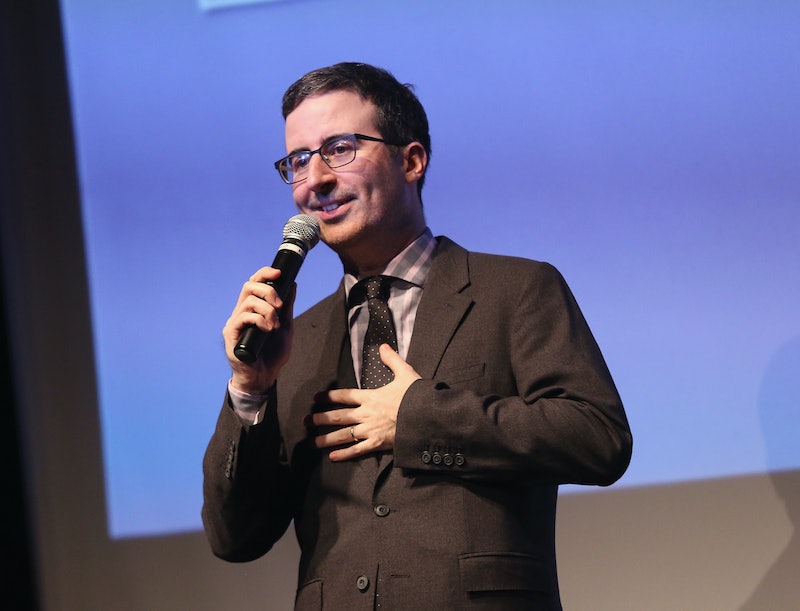 If you've ever seen an episode of Last Week Tonight, then you've maybe asked yourself at least one time: Does John Oliver have any kids? Well, the great news for the preservation of the human race and future generations of people is that Oliver does have children. In fact, the well-loved host of Last Week Tonight only became a father in late 2015.

This is obviously great news for those of us who wish (for their own posterity) to live in a world where Oliver has made a significant impact, particularly outside of his show's work, then we can safely assume that having a child, raising that child into an adult, and setting said adult off into society is impactful enough, especially if they are raised by Oliver.

Oliver and his wife, Kate Norley, an Iraq war veteran and combat medic, welcomed their first child, a baby boy, back in November 2015. The couple met when Oliver was working on The Daily Show and covering the 2008 Republican National Convention in Saint Paul, Minnesota. Norley was also attending the convention with a group called Vets for Freedom. She helped hide Oliver from security after he snuck onto the second floor of the Xcel Energy Center, which he didn't have authorization to enter.

Oliver and his RNC hide-and-seek buddy married in 2011. Oliver described their meeting in an interview with The Hollywood Reporter back in 2014. He explained that at the time, he was a European and member of the European Union with only a work visa. Norley understood that if he was arrested, he would have likely faced deportation. It was not so romantic at the time, though it has blossomed into a successfully loving relationship between two people with very different political ideologies.

Apparently, this difference in opinion has changed the way he views America, to an extent. "I'm a little more defensive of how America is perceived overseas," Oliver told The Boston Globe, which is a highly fascinating perspective for a British-American to take upon moving to the States — that is, next to marrying an American who served in the military. Their son may one day have some great perspective on America's relationship with and role in the world.

For anyone curious as to what Oliver's son might look like, the host has given a small hint:

What a sweater, Oliver family. Certainly, the couple isn't planning on making their own toddler sport his name on an article of clothing, but you never really know these things. In any case, Oliver's fanbase can rest assured that his beloved comedy genes will carry on into the future.

More like this
Which Cast Member of 'Westworld' Season 4 Has the Highest Net Worth?
By Meg Walters
Emma Mackey *Is* Emily Brontë In The First Trailer Of The Biopic
By L'Oréal Blackett and Sam Ramsden
This 'Sex Education' S4 Update Is Everything You Were Hoping For
By Bustle UK
‘Stranger Things’ Stan Megan Thee Stallion Grilled Natalia Dyer About Nancy & Steve
By Brad Witter
Get Even More From Bustle — Sign Up For The Newsletter