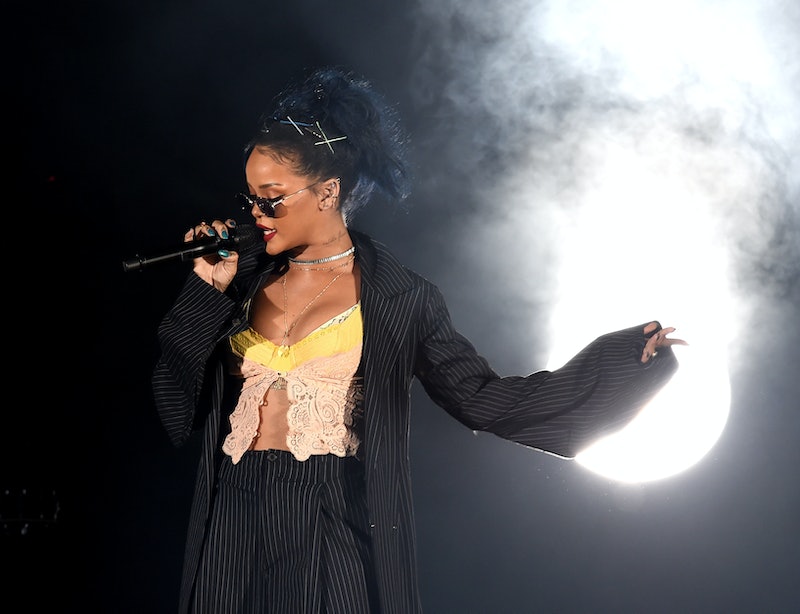 When it comes to our bras and knickers, we seemingly want more for our dollars than ever before. This is why I've happily taken to the trend of wearing underwear as outerwear. It's fun, it's hot, and it means that people will actually get to see the bra I spent $50 on in order to pull my nipples from my knees to beneath my chin. This trend always has been and always will be copyrighted (not literally) to Madonna, whose Jean Paul Gaultier cone bra changed the world forever in 1990. But in the years since, the world has seen many celebrities embrace the underwear as outerwear look.

In fact, I think it's fair enough to claim that on almost any red carpet, you'll spot a star in their underwear for sartorial purposes. (Especially if Lady Gaga is there, since the singer-sometimes-actor has adopted the trend as a hallmark of her style.)

Whether we're talking a subtle bit of bra showing under a suit jacket, a bralette instead of a crop top, or a full-fledged panty and bra co-ord with absolutely nothing else, this trend isn't going anywhere anytime soon. And thank God, because there's nothing I adore more than people utilizing their clothes in ways they are not typically used for. Let's celebrate 15 celebs who've killed this look.

Even as recently as the 2016 Met Gala, Lady Gaga rocked underwear as outerwear. The highly embellished bra and bodysuit set were meant to represent the future of fashion; and hopefully, looks like these are where style is headed.

No matter her age, Madonna is letting us know that she is the OG of wearing underwear as outerwear. I only hope I'm still rocking looks this strong when I'm 57 and forever thereafter.

If Rihanna isn't your fashion icon, you're doing fashion wrong. Not only does RiRi wear underwear as outerwear frequently, but she makes the trend all her own.

During the 2007 BET Awards, Beyoncé slayed in this all-gold bra that should probably never be worn under any clothing. It's too gorgeous not to show off, plus it'd probably slice your nip off if you weren't paying proper attention.

This bra in lieu of a top could easily have gone unnoticed under Gwen Stefani's chic, embellished jacket. But I will always notice it.

Lil' Kim is my ultimate '90s and early '00s celebrity love, mainly for looks like these.

This cyborg-style outfit from Nicki Minaj is pretty reminiscent of her Pink Friday looks circa 2010, before her Harajuku Barbie style was swapped for an all chic, all glamour, all the time aesthetic.

FKA Twigs' style is one to be envied. It's effortlessly beautiful and almost always ethereal, even when it's just about embellished underwear and some sheer fabric.

She's a polarizing figure in the celebrity world, but Miley Cyrus goes for the almost-nude underwear as outerwear look more often than most. And she always does it with a unique take on the trend.

Christina Aguilera's "Dirrty" phase left us with many underwear as outerwear inspiration in the early '00s as the star seemingly tried to shed the Disney label.

I mean, who doesn't know that the princess of pop has rocked this look countless times throughout her career?

Wearing your underwear as outerwear isn't just limited to wearing a bra as a crop top — something Mariah Carey proved in her panties and suspenders.

Amber Rose followed suit, rocking a corset and panties as a full-fledged look.

Ariana Grande's wardrobe is to die for and this two-piece set proves it. Now if only I could cop one for an affordable price.

Hopefully these celebs have inspired you to try rocking the underwear as outerwear trend. Sure, our bras may not be as expensive or as embellished as some of these looks, but the effect will still be the same: You'll look daring and sexy. What more could you want from an outfit?