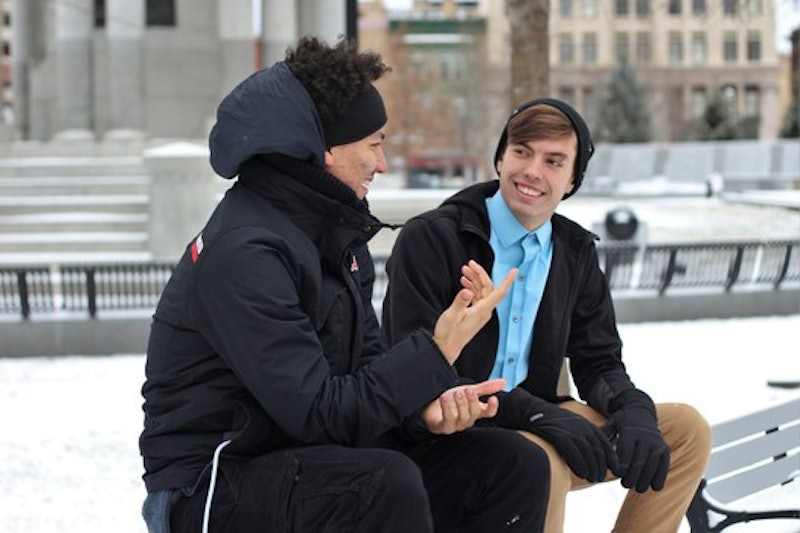 Having meaningful conversations seems like a thing of the past alongside RAZR flip phones and VHS tapes. Because of technology, traditional human interaction is slowly disappearing and it's becoming hard to find ways to be more engaging in our conversations. Even though new outlets, such as social media, allow us to be connected to the world 24/7, our brains could be over-stimulated because they never turn off.

"Social media has definitely had a huge influence on lack of engagement in conversations, especially in younger generations. No one talks on the phone anymore. Communication seems to be done primarily by text, Facebook, and Instagram," says Life Coach Julie Holmes in an interview with Bustle over email. While blaming social media for our lack of engagement may sound like a cop-out, it's important to be aware of your environment and how it can affect your personal relationships. But getting rid of social media isn't necessarily the cure-all for most of our social interactions. There are things you can personally do to have more meaningful conversations with someone instead of just staring at your phone. "It's important to make the individual you are speaking with feel heard and understood. If you're not engaged in the conversation, you can come off as being rude, selfish, or that you just don't care," says Holmes.

Having deep, engaging conversations needs to be a part of life because it allows you to connect with others and results in a deeper happiness. If you have you've been feeling disconnected from the world, here are 11 ways to be more engaging in your conversations.

While talking is an important element in any conversation, listening is just as vital. Give full attention to the person you're talking to by actively listening to what they have to say. "This is all about learning to be a more active listener. This is not just waiting for the other person to stop talking so that we can say the next thing we want to," says psychologist Nicole Martinez Psy.D., LCPC, in an email to Bustle. "This is truly being engaged and listening to what they are saying, being interested, asking questions, and clarifying. This shows the other person that you care about what they are saying, and really care about them in the bigger picture."

"People love to talk about themselves and things that they are interested in, so if you are ever at a loss for things to talk about, go to these topics of conversation, and the talk should take care of itself. They will feel like you know them and listen to them. If they are an engaged individual, they will reciprocate, and you will have a great conversation all around," says Martinez. This is a great way to connect with someone when you don't really know them. It can help drive a connection between the two of you because the person you're talking to may believe that you genuinely care about their well-being.

It can be hard to have a meaningful conversation if you mumble or trail off when you're speaking because you're too worried about how other people think of you. Let those distractions go. A connection will most likely happen if you show your true self instead of trying to form conform into the person you think they want you to be. "Do not fear bringing up a topic of conversation, and know that what you have to say is worthwhile and important as well, as this holds many people back from being engaged." says Martinez.

4. Put Your Phone Away

Don't allow yourself to be distracted by your phone when you're having a good conversation with someone. It actually can harm your relationship more than you think. According to lifestyle site, The Muse, a study indicated that you can be viewed as less empathetic and trustworthy if you're constantly using your phone around someone else.

"In order to have someone feel heard you can reflect back what they are saying to you. Simply paraphrase what they just said. This way they will feel understood," says psychologist Kim Chronister, PsyD in an interview with Bustle over email. This might sound repetitive, but it's a great mental trick to help you be more engaging in your conversations. because it can prevent miscommunication between you and the other person.

For some people, social anxiety prevents them from having engaging conversations. But if you begin discussions by asking non-personal open-ended questions, it can help release the pressure of trying to force a conversation. "Ask a non threatening open-ended question regarding either their current location, or the occasion," says Holmes. "So if you're at a bar, 'Hey, do you know what the drink specials are tonight?' Or if you're at a wedding 'So what do you think of the band?' From there you can move the conversation to something more personal. Be the one asking the questions and allow the other person to speak. If you can get the other individual talking about their interests, you'll have the potential for a much longer more meaningful conversation. People love to talk about themselves."

It's been proven that mirroring someone else's body language can drive a connection between both of the individuals and can increase good will amongst others. When someone mirrors another, it signals that there's trust between both individuals. "In order to engage with someone fully you should 'mirror' their body language. For example, if someone uses a certain gesture do the same. Studies show that people who are in sync with their body language have better rapport," says Chronister.

Sometimes you're so focused on your own problems that you can completely forget how to release that stress when you're engaging with others. Try to let those distractions go when you're talking with someone so the person feels important and validated. "We spend too much time in our own heads cycling our To Do lists, thinking about recent events, or worried about something that hasn't even happened yet," says Holmes.

9. Try To See Things From Their Perspective

"Look the other person in the eyes, and be genuinely curious about what they have to say and why they are saying it. Make a point to really want to understand the other person better, and try to see things from their perspective," says Holmes. Don't half-ass conversations with people — you don't want to waste their time or yours. Try to be attuned with the other person's feelings the next time you have a conversation with someone.

10. Find Some Commonality With The Other Person

Meaningful conversations tend to flourish when you find a commonality between you and the other person. By asking questions and being vocal about your likes and dislikes, it can most likely open a whole new door of possibilities of conversational topics. "Be curious. Ask a lot of questions. Find things you have in common and talk about them," says Holmes.

11. Keep Your Body Language In Check

"Actually 93% of communication is nonverbal, so it's important to be mindful of your body language. You can tell when someone is or isn't interested in what you have to say. Direct eye contact is great, and having your body facing toward the other person can also help. Put aside anything else you might be doing and turn off all electrical devices," says Holmes. Your body language is just as important (or even more so) than the words coming out of your mouth. Give respect by putting your phone away, and facing them, so they can have your undivided attention.

Don't get discouraged if you can't have a meaningful conversation right away. As long as you don't give up and have patience, your conversational skills will blossom.

More like this
14 Scary Campfire Stories To Tell Your Friends
By Charlotte Ahlin and Kaitlyn Wylde
10 Ways To Be More Empathetic To Your Partner
By Raven Ishak and Lexi Inks
Think Your Partner Is Cheating? These Tarot Cards May Confirm Your Suspicions
By Kristine Fellizar
The 19 Best Tweets & Memes About Bisexual Awareness Week
By Lexi Inks
Get Even More From Bustle — Sign Up For The Newsletter