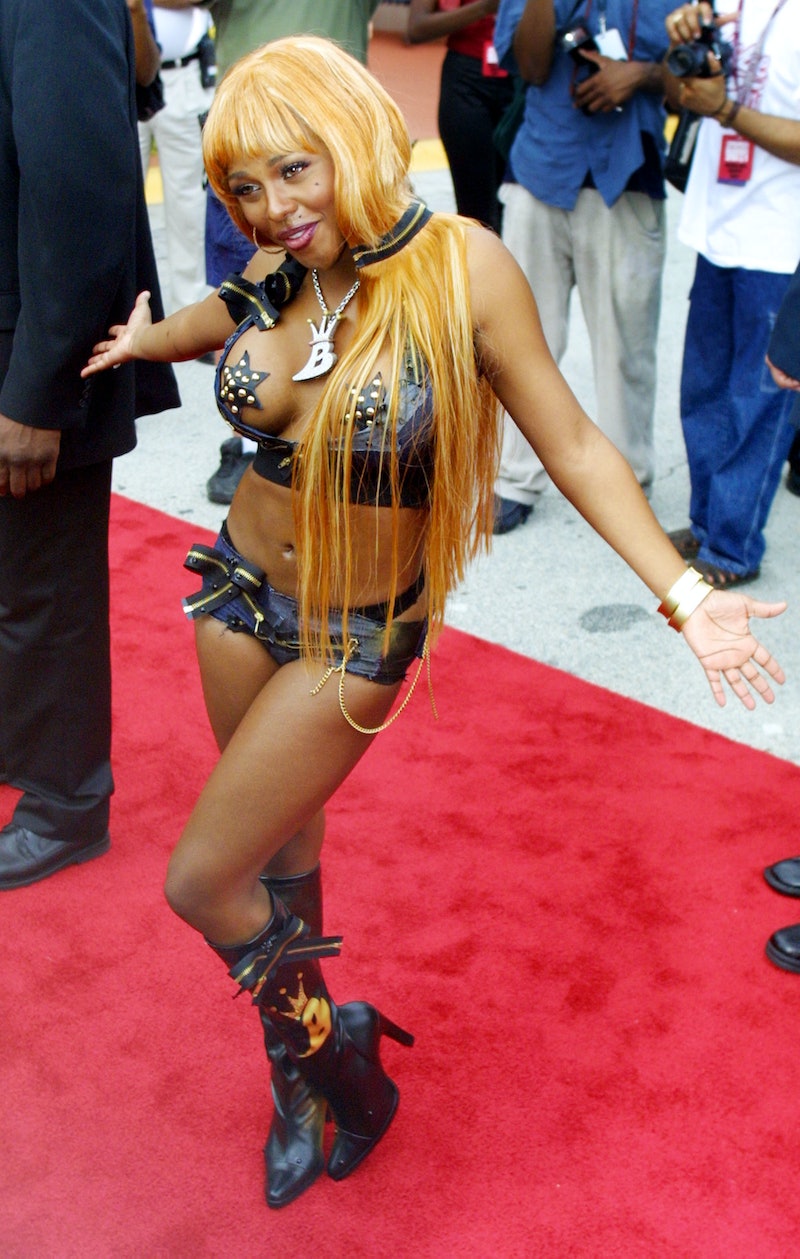 Before there was Nicki Minaj, there was Lil' Kim — as their well-documented beef might let you know — and Lil' Kim's early 2000s style was undoubtedly part of what made her everyone's favorite female rap star of the era. I mean, who doesn't remember that mermaid look that was so legendary that Miley Cyrus would recreate it years later for Halloween in 2013? There's a reason that this songwriter and rapper deserves an entire list dedicated to her early millennium style, and it's because she looked absolutely amazing throughout the entirety of 2000 to 2010: A feat few of us managed to achieve.

What makes Lil' Kim's looks stand out so much during this period, particularly among the other stars who were making it big at the same time, is her unique take on early '00s glamour. Her aesthetic was bright and bold, as many looks from the time were, but it took "OTT" to a whole new level; one that many have tried to mimic, but failed to do so.

Lil' Kim pulled it off because she was Lil' Kim, and that meant a hell of a lot during the early noughts. She rocked into my life with her feature on "Lady Marmalade," and has kept a special place in my style-obsessed heart ever since. That said, let us now celebrate 21 of her most early '00s looks ever.

Perfect blonde curls and a leopard print, hot pink bustier? She was the early '00s Barbie doll we all wanted to be (and TBH, still want to be).

In fact, every outfit in this shot is 100 percent early '00s fabulousness.

Here she was serving up some barely-there cowboy realness in an amazing look that proved denim doesn't have to be a dressed-down fabric.

Twenty years after the release of Michael Jackson's "Thriller," Lil' Kim brought the red leather jacket back to be a vision in red for the 2002 Grammy Awards.

I personally think this gold jacket and black bodysuit combo wouldn't look that amiss next to current red carpets.

This time, she looked a hell of a lot more conservative: Not that I'm trying to claim an embroidered denim trench coat with a matching mini skirt and a bra as a dressed-down look.

Start organizing my funeral, because those boots have slayed me. Paired with a maxi dress that is doing everything in its power to be as revealing as possible and a '50s-esque hairstyle, this look is throwing different trends at each other and making it work.

8. Black Mesh Before Your Faves Did It

Lil' Kim was rocking the almost-nude, see-through black look well before our current favorites ever did.

Reminiscent of the infamous Versace gown that J. Lo wore and that would subsequently reinvent Google Image search, this take on the look by Lil' Kim was a bit more revealing and a hell of a lot more fabulous.

Don't you hate it when you're wearing your best short shorts and bikini top and your mom makes you take a jacket with you? Just make sure it's a sumptuous white fur like Lil' Kim's.

I mean, why not own every possible leather jacket hue that isn't black, am I right?

This look gave a whole new meaning to the term low-cut. It was the kind of low-cut that most celebrities these days would never dare try and pull off.

Only Lil' Kim could rock an elbow-length black glove and not look ridiculous, I'm sure of it. This outfit just oozed early '00s glamour.

The combination of pink and black always reminds me of emo style. That is, until I see Lil' Kim making it look cool AF.

Seriously, though, this look wouldn't be out of place on Elle Woods in Legally Blonde. And when are we going to bring back collars that big? I miss them.

Why not both? Well, a whole load of reasons actually. I'm not even going to try to defend this look. Let's just say it was very of its time.

I actually need this outfit in my wardrobe right now. Lil' Kim proved that trashy and classy have a very thin line drawn between them — and that tightrope walking it can make for the best outfits ever.

Although Lil' Kim's looks were all about the early '00s, the rapper could equally pay homage to other decades with just as much ease.

Seriously, imagine this look in light pink and it's almost an exact replica of every outfit Paris Hilton wore during the early '00s.

I swear that every celebrity has worn a bustier or corset as a top at one point in their career, and the early '00s were pretty notorious for it.

If all-black-everything is the simplest way to look chic in the modern age, all-white-everything was the equivalent in the early '00s. Posing on a white sofa, Lil' Kim showed us that this trend was all too easy to pull off.

I hope this list has inspired the same amount of Lil' Kim love in your heart as I have in mine. If not, let it be a fun reminder that early '00s fashion affected everyone, no matter what profession or style genre they subscribed to.