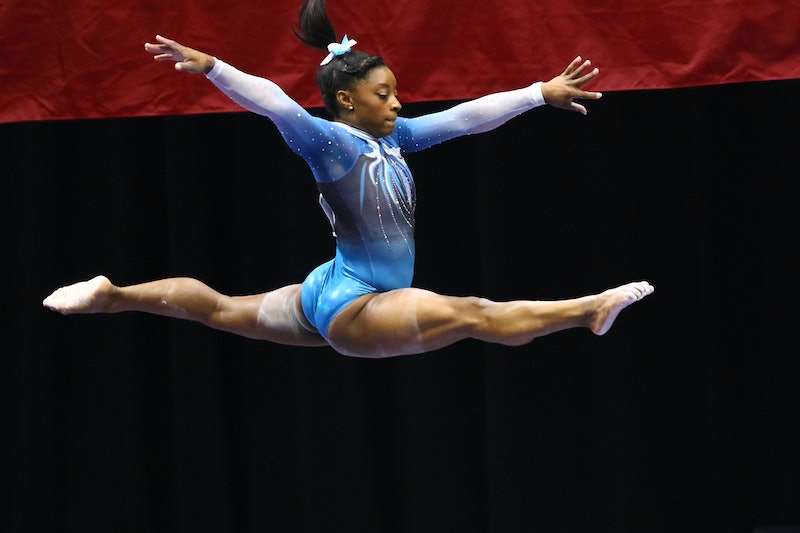 With the 2016 Olympic games in Rio de Janeiro beginning on August 5, the world's best athletes are working to secure their spots on their countries' teams. The U.S. Gymnastics Championships were held on June 23-26. There, top gymnasts competed for a place on the U.S. Olympic gymnastics team. And world champion gymnast Simone Biles has already made history.

Nineteen-year-old Biles won the all-around U.S. championship with 125 points, winning first place in vault, floor exercise, and balance beam categories. This was her fourth consecutive U.S. championship win. The last woman to win four in a row was Joan Moore Gnat, who clinched her fourth victory in 1974. Biles became the first woman ever to get three consecutive all-around wins at the World Gymnastics Championships in 2015. Are you feeling lazy yet? There's more. Biles was also the first American to earn 14 World Championship medals in gymnastics.

Biles' entrance into the world of gymnastics happened at the age of six, when her grandfather Ron and his wife Nellie, who adopted Biles and her sister Adria, enrolled her in a gymnastics class. "[They] support me in any way possible. My parents make sure we have everything we need so that we compete to the best of our abilities," Biles told People magazine in March. Her talent and passion for the sport were immediately apparent. Biles has been competing at the senior level since 2013.

According to Team USA, Biles' fellow gymnasts joke that second place is the new winning, since Biles is such a clear frontrunner every time. Despite her domination of the field, Biles remains humbly apprehensive about her prospects of making the 2016 Olympic team, as she told People: "Right now when I think about the Olympics, it's not too much. I think of trials more than the actual Olympics, because that's one of the hardest steps until you're named to the team."

The final trials for hopeful Olympic gymnasts take place July 8-10 in San Jose, California. It's hard to imagine that Biles won't dominate there, as she has in every competition for several years. We can safely bet that we'll see her lead the U.S. team in August. Keep a close eye on this amazing young woman, who is almost certain to make history more times this summer.