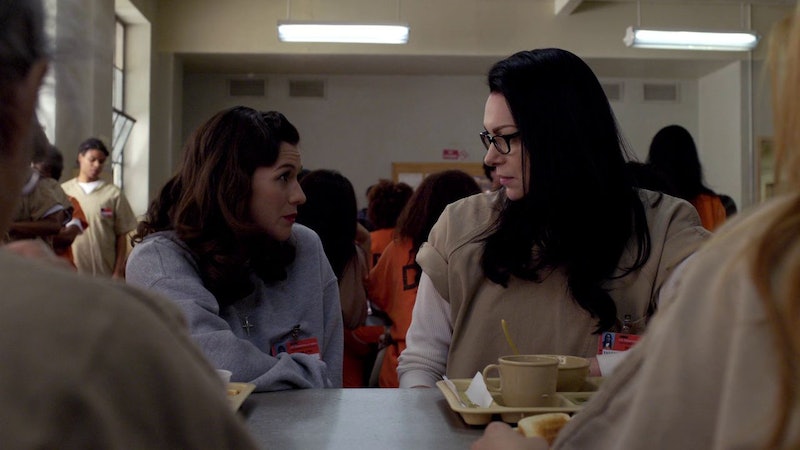 Warning: spoilers ahead for Orange Is The New Black season 4. If you're anything like me, your nerves are still jangling from the epic Orange Is The New Black season 4 cliffhanger, which raised some serious questions about the future of the inmates at Litchfield Penitentiary. After tensions grew within the prison, the prisoners took to the tops of cafeteria tables in peaceful protest. But when the prison guards tried to bring the prisoners down from the tables, it sparked a wave of violence and Poussey Washington was suffocated by guard Baxter Bayley. And when warden Joe Caputo defends the guard at a press conference and doesn't even name Poussey, it sets off a full-on prison riot. And that's all we get: C.O. Humphrey pulls out an unauthorised gun, which ends up in Daya's hands and the screen fades to black with Daya still weighing her decision. So what happens now? What generally happens to prisoners after a prison riot? Are there rules and protocols? And what does it all mean for our Litchfield friends?

So many aspects of this scenario echo recent events — including Eric Garner's death from suffocation at the hands of the police to the Say Her Name campaign. If the show is so keen to echo reality, one could argue that the inmates would suffer the same real life consequences that actual prisoners would face in this circumstance. And those consequences are dire.

However, it doesn't appear as if there's one set way of dealing with a riot: The whole thing is contingent on context. Last year's riot at the Willacy County Correctional Center in Raymondville, Texas was dealt with by a SWAT team and after the riot was ended, the inmates were sent to other prisons and the private company that ran the Correctional Center lost its contract. Meanwhile, Joseph Demerson, an inmate at San Quentin State Prison, made the following claims about prison riot aftermath on Quora:

After a riot is started normally the officers respond with pepper spray, rubber bullets and even with deadly force in the form of a mini-fourteen semi automatic rifle. Once the injured are taken away to the medical services, the rest of the population is confined to quarters until it is deem safe for the rest of the prisoners to resume program without further altercations.

If Orange Is The New Black takes either of the two above scenarios for inspiration, it sounds like the official response will be incredibly dramatic and sounds as if more characters on the show could lose their lives in the chaos.

This said, there being a prison riot at all is notably unrealistic for 2016. Despite rocketing prison populations, there are far less prison riots now than in the past: the Atlantic reports "In 1973, we had 93 riots for every 1 million prisoners; in 2003, we had fewer than three." Could it be that OITNB isn't referencing prison riots in general, but one in particular?

It's worth noting that the characters chant "Attica! Attica!" during the riot. It doesn't seem like a leap of faith to draw a connection with the 1971 Attica Prison riot in New York, which was legendary for several reasons: it lasted for five days, it left "43 inmates, officers and civilians dead." Attica is more relevant than ever for tragic reasons: in May 2015, an investigation was opened into what abuses were covered up in the aftermath of the riot. According to the same Guardian article linked above, James Watson, a guardsman and eyewitness reported seeing inmates “poked in the groin and rectum with nightsticks, [and] beaten while running through gauntlets” while Robert Jenks, a physician at a nearby hospital reported that he was not allowed to treat “an inmate who had suffered severe brain damage.”

As such, this Attica reference does not bode well for the fate of our favorite inmates — I'd assume the chants were to prepare us for a season of unprecedented brutality on the part of those running Litchfield Penitentiary next season round. So maybe the prison riot isn't so unrealistic after all.