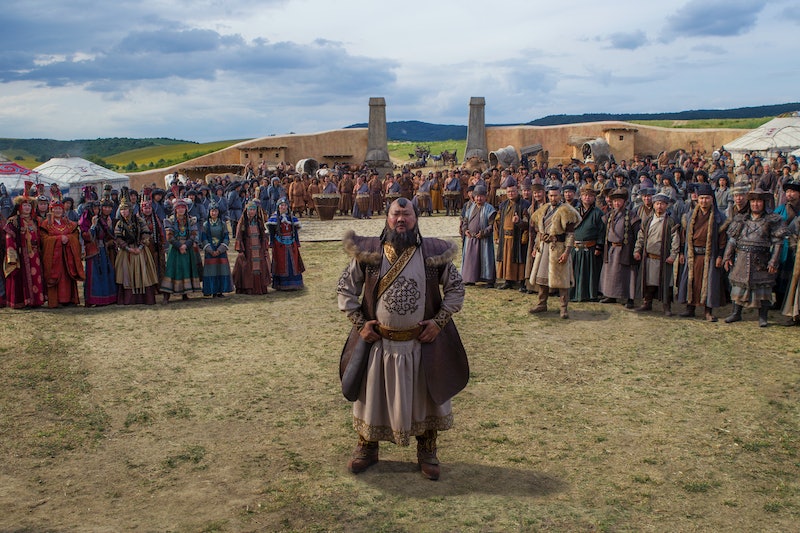 If trailers are to be believed, it looks like there's a lot in store for Marco Polo when Season 2 hits Netflix on July 1. Kublai Khan conscripts Polo to the order of the Mongol Knights. Michelle Yeoh joins the cast in a recurring role as a mysterious figure from Hundred Eyes’ past. It's a lot to juggle. So, will the season be long enough to contain it all, or will it have to spill over into another season? And, if so, is Marco Polo renewed for Season 3?

So far, Netflix has yet to make an announcement yet about whether or not Marco Polo is renewed or canceled. The streaming service also doesn't release ratings numbers, so it's hard to hazard a guess about which way it's leaning. From my own unscientific observation, Marco Polo doesn't seem to get as much love from the outside world as other Netflix series, like House of Cards, so I do think fans have a reason to be worried. But, it also got a one-off One Hundred Eyes special between Seasons 1 and 2, which suggests that there were many viewers clamoring for more and is reason to be optimistic. Still, if for some reason Marco Polo doesn't return — or if, oppositely, it ignites a thirst for historical dramas — there are plenty of other explorers who would make for good TV fodder. Here are my suggestions.

Hudson, namesake of the Hudson River in New York State, came to a mysterious end: His crew mutinied, and he was never heard from again, as Live Science explained. This could be the peg for some kind of imagined history about what happened to him afterward—alternate histories are so hot right now.

No, not Captain Hook. Captain Cook's voyages to New Zealand and Hawaii, chronicled by the University of Canterbury, may not have worked out so well for him (he was killed), but they would make for some fantastic scenery.

One word: Pirates! Or are we all over pirates now that Pirates of the Caribbean series refuses to go away?

According to History, Jiamu's fate is a modern mystery: The beloved Chinese adventurer vanished in the desert in 1980, after leaving a note saying he was going out to find water. History reported that he was probably buried by a freak sandstorm, but we can always imagine something more fantastical.

Let's not forget the impressive female explorers who made perilous journeys of their own. Getrude Bell was an explorer in the Middle East after World War I. I'd love to know more about what her experiences were like there — you probably don't have to gussy it up too much with invented drama.

Speaking of impressive women, according to Mental Floss, Barré was the first woman to circumnavigate the globe — but she had to do it dressed as a man. "[The] ruse that kept her close to her love, Philibert de Commerson," the magazine wrote. "The two met over a shared passion for botany." Wow, that story has all the makings of an amazing television series. Whether or not Marco Polo returns for Season 3, I hope Barré's story will be adapted and shared with audiences too.