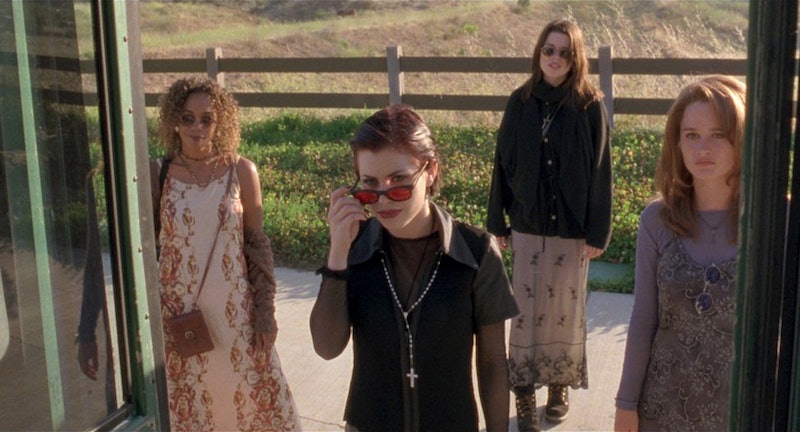 My flatmate and I watch teen films more than I watched them between the ages of 13 to 20; and with the help of hindsight, I appreciate them so much more. The style of teen films, the actors, the plots, the soundtracks: There's nothing about these movies that I don't love. In fact, I think the clothes in teen films are probably the most iconic and most important out of any genre; not just because they represent the youth of the era they were made in, but because they so often create styles all of their own.

It's not often that a film impacts fashion; but when it does, it's more often than not a teen film. Just try to tell me that Clueless didn't change the world. That movie reinvented plaid, retold Jane Austen's Emma in the 20th century, and added "as if" to the vocabulary of every woman under 30.

Clueless is not the only film to impact a generation so powerfully, though. In fact, there are way more teen movies that created and spread their own style than you might think. Below are just a few of my favorites. They are films that especially affected me and those around me, and films that, IMO, impacted the world of fashion forever.

I've already waxed lyrical about the importance of Clueless on the Millennial generation, but just to reiterate: This film is the epitome of movies creating their own fashion. So much so that Iggy Azalea's "Fancy" video paid tribute to it in 2014.

Speaking to Vanity Fair, the film's costume designer Mona May and Clueless director Amy Heckerling noted that they predicted the future of fashion when creating costumes for the film. "For the movie, I mixed thrift store with designer because I did not have a lot of money in my budget to buy designer things," said May. "It was about taking fashion from all different sources and predict[ing] what would be on the street six months ahead, like a fashion designer would."

By thinking how fashion designers think, the movie managed to make a feminine, plaid-clad style all of its own.

Grease encapsulated the '50s and taught many of us that badass women can totally wear pink. Let's ignore for a minute that Sandy totally changes her look for a guy, because that guy's young John Travolta and her new aesthetic is absolutely sick. One in three hen parties features a Pink Ladies theme to this day, after all, according to statistics I just made up and my own personal life experiences.

This film is so much more than a musical, though: It's about discovering yourself, standing out against the twee norm of swing skirts, and being so damn stylish that your car flies into the sunset.

The bus driver tells these teens, "Girls, watch out for the weirdos." And Nancy replies, "We are the weirdos, mister." It's a line that spoke to alternative teens everywhere, myself included. The Craft is the film you watch when you're dabbling in being a goth, and it is the film that will fully convert you to the lifestyle.

Sorely underrepresented in teen film roundups, this '90s movie definitely inspired many teenagers who weren't quite on board with the campy Clueless lifestyle.

OK, I was a little too goth at the time this film came out to appreciate it. This movie, however, channeled the early 2000s aesthetic so perfectly for preteens and younger teens everywhere. The outfits were ridiculous, the songs were OTT, and more importantly, Ryan changed his hat nine times throughout the movie.

Mean Girls explicitly deconstructed the different cliques of high school with unabashed categorization. Although we're meant to hate The Plastics, we also want to be them so badly. I mean, that's essentially what the entire film is all about. Regardless of the hippy dippy resolution at the end, cliques are and always will exist in high school; and more often than not, these cliques will be divided by style. Or in the case of The Plastics, arbitrary style rules.

Although I shouldn't be promoting the division of people by aesthetics, I'm glad Mean Girls gave a realistic look into how appearance can affect your social standing in school. This film both influenced and perpetuated high school hierarchies, but did a whole lot in terms of making many of us fall in love with pink again, or for the first time.

For a film with only one outfit change throughout, the costumes in The Breakfast Club are as iconic as they come. There's no man's shirt I covet more than John Bender's. It just looks so soft. Molly Ringwald was also gorgeous as the perfect '80s prom queen. And each '80s stereotypical teen was so perfectly represented that of course these looks were going to be remembered 30 years on.

Heathers did plaid well before Clueless did it and Heathers did it in true '80s style — with shoulder pads and teased hair galore. This film inspired a generation into the school girl chic aesthetic — skirt suits included. Because if your school doesn't require a uniform, you should rock your own. A baby Winona Ryder almost exclusively wears black throughout the movie, which served as great inspiration for any gal into the all-black-everything look.

Some might argue that this was not technically a teen movie, but it was full of fashion inspiration for teens everywhere regardless. Romy and Michele's BFF-ness proved that matching outfits are a must for any true friends, and their bubblegum bright styles thrill me even now as I re-watch the story. Thanks to flashbacks throughout the movie, we learn that Romy and Michele's unique styles were misunderstood in high school; but afterwards, led them to great success.

This was a great message for anyone outcasted, bullied, or simply going against the norm of high school trends. Fashion is so much more than what people think is cool in the hallways of your school.

So many teen films are probably set in the '50s because the '50s were when teenagers were invented, basically. This John Waters film made many adolescents eschew being "squares;" and instead, encouraged them to throw on a leather jacket and a delinquent "drape."

Traci Lords encapsulated the too-hot-to-handle young woman who I pretend I am to this day; but most importantly, this gang of teens did wonders at showcasing the outcasts as the group to want to be like more than any other.

What Cry-Baby teaches us is that those who may not have been part of the popular group in high school usually end up being the coolest in hindsight. It's still an inspiration to any teens who may not be recognized for being as rad as they actually are.

If you don't fancy Rose McGowan in this film, then you're just wrong. This sex and booze-fueled story follows three deadbeat kids on a pretty horrible adventure, but the apocalyptic feel is one that will resonate with anyone of a certain age. Style-wise, McGowan stole the show and inspired a whole generation of blunt bangs and black bobs just a year after Uma Thurman rocked the look in Pulp Fiction.

I'm not talking about the 2007 musical version featuring John Travolta, as amazing as it is, but the 1988 original by John Waters featuring Divine, Debbie Harry, and Ricki Lake. Hairspray welcomed the '60s with open arms and, in true John Waters style, proved that the outcasts are usually way cooler than the popular kids.

More importantly, what this film did for style was place a plus size girl at the top of the food chain. Whenever I watch it, I fill with pride over my fat body. It's still an important film for any teenager feeling down and out about their clothing size.

These movies are diverse in their representation of different types of teens, and all champion very different types of styles. But one mantra runs throughout them: Staying true to yourself and your personal aesthetic is important, no matter how many adolescents may tell you otherwise.