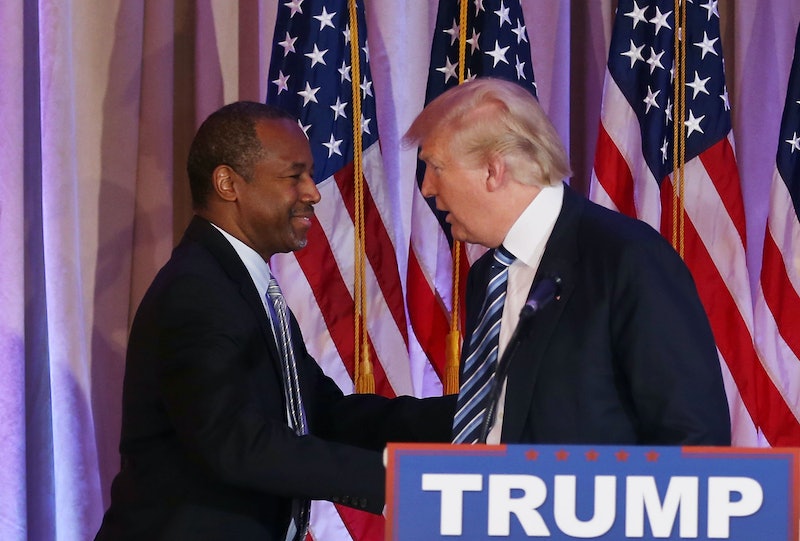 Ben Carson is back. The former GOP presidential candidate and (probably still) fruit salad aficionado surfaced Wednesday to say that if his mother was still around, she would get herself a gun and go shoot "dishonest reporters." Speaking on CBS Radio's Brown and Scoop podcast, Carson was asked by Brandon "Scoop B" Robinson how his mother would react if she had been alive to see him run for president. (She is actually alive, and Carson corrected Scoop.) Carson responded, laughing (?), "She probably would have taken a gun and gone out and shot some of the dishonest reporters."

Given that Carson is a vastly dimmed star, it’s difficult to say whether this message of inciting violence against the press should be taken seriously. Part of me thinks, "Really? Do people still take the words coming out of Carson's mouth as remotely substantive?" At the same time, there's a disturbing weightiness to Carson's words, because they are further evidence that its becoming increasingly commonplace for politicians, especially conservative ones, to make brash and disturbing attacks against the press — and I believe this path was relentlessly paved by one Donald Trump, presumptive GOP presidential nominee.

Dismissing any and all unflattering press as coming from a liberal bias has long been a common GOP tactic. (Remember Marco Rubio calling the media the ultimate Democratic super PAC?) But it doesn’t feel like a reach to say that thanks to Trump, this sentiment has reached new heights. He has shown brazen contempt for freedom of the press. During his presidential campaign, Trump has vowed he will "open libel laws" and make it easier to sue members of the press. At a rally in Radford, Virginia in February, Trump said, "The press is a real problem in this country."

But Trump has been more than just talk; he has been taking active steps to fight the press. His banning of the Washington Post from his campaign events in June was unprecedented. Prior to that, Trump had already denied access to various media outlets and journalists, including Politico, The Daily Beast, and Gawker (though there were later reports Trump had relaxed his alleged media "blacklist"). To add insult to injury, on Twitter, Trump's recently gone after everyone from The New York Times to CNN to Fox.

Carson’s comments about his journalist-shooting mother would seem way more shocking had we not been being primed for that kind of stuff by Trump for the last year. But because of the tone Trump has set, statements like that don’t stand out nearly as much as they should. They’re just more of the same.