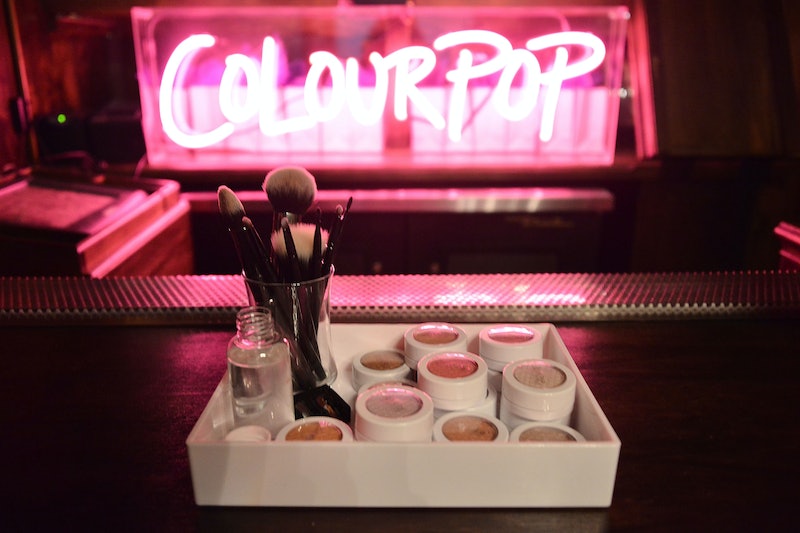 Stop what you're doing, because this Instagram-famous brand is changing up the beauty game yet again. Although they're still in the production stage, ColourPop announced the release of tie-dye highlighters on Snapchat. That's right, a whole mix of your three favorite shades jam-packed into one pretty product. They even gave fans a sneak peek of what they will look like, and you have to see it to believe it.

This year alone, ColourPop Cosmetics have rolled out three different lip formulas, Sculpting Stix, and brow products and now they're at it again. Honestly, I don't think this company ever sleeps. As if the highlighters aren't already fabulous enough, this time they thought up a totally new version. According to their surprise Snapchat announcement, the new product will combine three of their already existing shades into one swirled cheek tint.

Not only did they announce the news and share them creating one on Snapchat, they also asked their fans to weigh in. They posted on Twitter asking fans what combination they wanted to see, and people did not hold back one bit. Wisp, Stole The Show, and Lunch Money are among the biggest fan favorites, but there are also some standout shades like Sticky Sweet that would also make for a standout highlight.

Here's a sneak peek at their very first prototype to give you an idea of what the finished product will look like:

Are you freaking out yet, because I am! The little shimmery swirled product is absolutely gorgeous. Plus this is just their first test run, so it will only get better from here.

Unfortunately, there is a downside to all this good news. The Snapchat announcement also noted that this will only be a limited edition product, with a small amount available for sale. Who knows though. Maybe they'll turn out so awesome that they'll keep them in stock permanently!

Either way, all I know is that these little beauties will go fast. Until then, I'll be patiently stalking ColourPop's social media sites, because the product is too pretty to pass up!