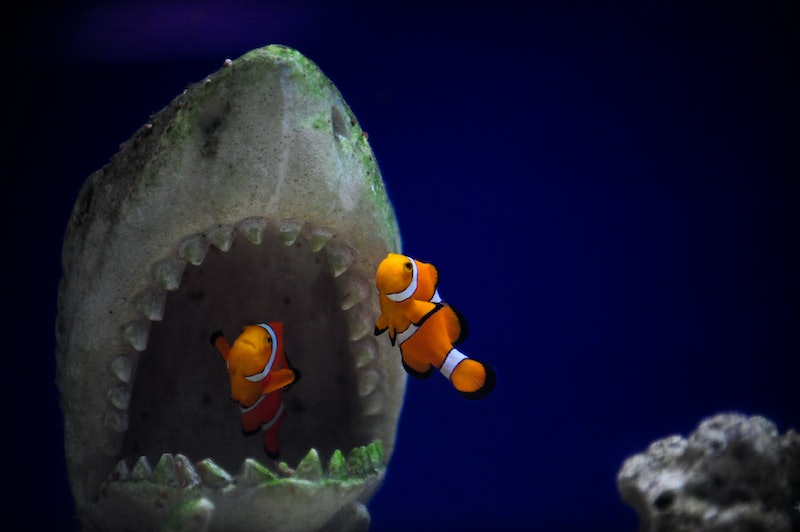 The long-awaited "Shark Week" is making its annual appearance this week on Discovery Channel, and shark fans (and foes) around the world are pumped as they are each year for some glorious underwater television. Oddly enough, considering how many of my personal friends and acquaintances rave about their fascination for the widespread phenomenon, I've learned next-to-nothing about sharks from these fans. So, I took it upon myself to do some research, and the myths about sharks that people think are true — in honor of Shark Week, since I feel like the whole purpose of the event is education, and not just a depraved anticipation of human death via shark. Right? Right!?

Between you and I, I don't partake in Shark Week. That doesn't mean I can't spread some knowledge to the masses about shark attacks, shark food preferences, and other shark-related things. This is stuff any beach-goer should have in mind when hitting the water, especially since sharks have such a scary reputation. In any case, it's fun stuff to know when somebody asks you what you learned during Shark Week.

Myth #1: Sharks Have A Preference For Human In Their Diet

False. According to the National Ocean Service, humans are not the typical meal of sharks. When sharks do attack humans, they are usually hunting for similar-sized prey, like dolphins or large fish. Most sharks actually eat fish or invertebrates, like squid or clams. Of the over 300 species of sharks, only about 12 have attacked humans.

Actually, shark attacks are relatively uncommon — in fact, getting struck by lightning is more common. Humans kill far more sharks than vice versa, to the tune of 100 million shark deaths per year. The rate of shark attacks has generally remained the same, despite increased human activity in the world's oceans. There were 98 unprovoked attacks in 2015, according to the Florida Museum of Natural History.

Myth #3: Most Shark Attacks Are Fatal

According to SharkAttackData.com, most shark attacks are not fatal. In the U.S. alone, 2,083 recorded shark attacks have occurred to date, with the most recent occurrence on June 15, 2016, at Kalapaki Beach in Kauai, Hawaii. Since the mid-1800s, only 166 shark attacks in the U.S. have proven fatal.

Myth #4: Sharks Are Unimportant Carnivorous Members Of The Food Chain

Sharks actually play a huge role in marine communities, according to Oceania.org, often sitting atop the food chain and keeping other sea life in regulation. They are one indicator of ocean health. In fact, some sharks prey on the sick and weak, which actually helps maintain healthy populations of underwater life.

Just because humans aren't sharks' favorite type of food doesn't mean they don't occasionally investigate what is happening near the shoreline. Avoid swimming at the beach during storms, during dusk and dawn, and in cloudy water, and avoid wearing jewelry and splashing around too much. The former three are times that sharks are more likely to be present, and the latter two can draw unwanted attention to a person. Sharks get curious, too.

Myth #6: All Sharks Are Huge And Deadly

Nope, shark sizes vary greatly. Sharks range from six inches in length, like the dwarf lantern shark, to 60 feet, like the whale shark — which, are actually harmless to people despite their size! Sharks are as unique as any other fish.

According to SharkAttackData.com, America has the highest number of recorded shark attacks, at 2,083, followed by Australia with 1,269. It makes sense, considering the frequency of warm climate and sheer amount of coastline in each of these nations — 12,380 miles of U.S. and 16,006 miles of Australian coastline, respectively.

That's all for now, so heed these facts wisely, students. They may save a life one day!