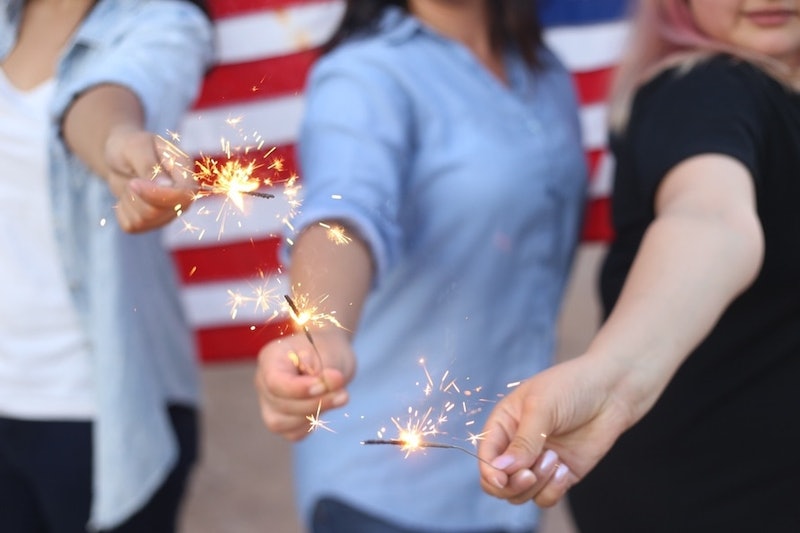 The United States will soon celebrate its 240th birthday, and people across the country will raise their glasses and wave flaming sparklers in honor of their favorite freedoms. Music is one place we can turn for a little birthday celebration of our country, but these patriotic Fourth of July lyrics aren't the Yankee Doodle military-march lyrics you sang in grade school.

Independence Day in an election year holds a special kind of awareness — with a 24-hour-a-day debate raging on what is and isn't best for this country, it might be challenging to find the ra-ra enthusiasm of dedicated sports fans that many seek each July. Patriotism in 2016 has to mean something separate from nationalism. I don't think anyone over the age of six believes that the United States is a superior, flawless pillar of freedom and integrity. But, just like lovers in a long-term relationship, we can find a deeper appreciation and respect for our country by accepting its flaws and limitations and appreciating it for its potential. Patriotism is not narrow-minded or unquestioning.

That being said, the United States is pretty awesome. We're the nation of Ruth Bader Ginsburg, Beyoncé, and LeBron James. We invented the airplane, have access to an unfiltered digital universe, and recognize same-sex marriage in all 50 states. But let's look beyond the #GrandOldFlag for just a minute, and check out these lesser known, deeply complex patriotic lyrics.

Running waterThree bedroomsA public school for every quarterA store on every cornerA public defender, appointed to every pauperAffordable Jet BlueAny one of you can board a flying saucerAccess to cough drops and pork chopsSports facilities in the vicinity for freeYou must be kidding me this ain't the place to be

Homeboy Sandman readily admits that there are shortcomings to the American experience, especially for people living in poverty, but that, as a country, we have a lot to be thankful for.

Hands to the Heavens, no man, no weaponFormed against, yes glory is destinedEvery day women and men become legendsSins that go against our skin become blessingsThe movement is a rhythm to usFreedom is like religion to usJustice is juxtaposition in usJustice for all just ain't specific enoughOne son died, his spirit is revisitin' usTruant livin' livin' in us, resistance is usThat's why Rosa sat on the busThat's why we walk through Ferguson with our hands up

I challenge you to think of a person more patriotic than Martin Luther King Jr. These lyrics from the soundtrack to 2015 film Selma are about faith in progress in the face of great struggle, believing that America can become a more equal place for people of all races despite the frequently deadly racism that still exists today.

Oh beautiful, for heroes proved,In liberating strife,Who more than self, our country loved,And mercy more than life,America, America, may God thy gold refine,Til all success be noblenessAnd every gain divined.

You've heard these lyrics before. I chose this lyric for a few nostalgic reasons, not the least of which is the song's appearance in the Fourth of July scene in The Sandlot. I also heard this song on my way home from eighth grade on Sept. 11, 2001, and this verse has always stuck with me. This song isn't about some sort of cowboy superiority — it's about commitment, and Ray Charles really drives it home with this performance.

The whole second half of this song is so much more tongue-in-cheek than the first. I will, frankly, believe anything Sharon Jones says. She's an icon. But this performance is a rallying cry to the 99 percent, as we say, and that is kinda what America has always been about, isn't it?

5. Lin-Manuel Miranda — “My Shot” from Hamilton

You know that scene in D2: The Mighty Ducks when Michele MacKay tells the team that "America is a teenager just like you... A little awkward at times but always right there on the verge of greatness"? That's what this lyric reminds me of. Historically speaking, 240 years is small potatoes as far as world powers are concerned. Let's hope we age gracefully.

More like this
32 Cheap Gifts For Your Bestie That Go Beyond Basic BFF Necklaces
By Emily Kelley, Mia Mercado and Brittany Leitner
How Long Does Leftover Stuffing Last? Here's When To Toss It
By Chelsey Grasso and Alexis Morillo
23 Genius Gifts To Get Someone You Don't Know Very Well
By Jessica Booth, Lauren Grant and Brittany Leitner
6 Friendsgiving Games To Liven Up Your Party
By Alexis Morillo
Get Even More From Bustle — Sign Up For The Newsletter