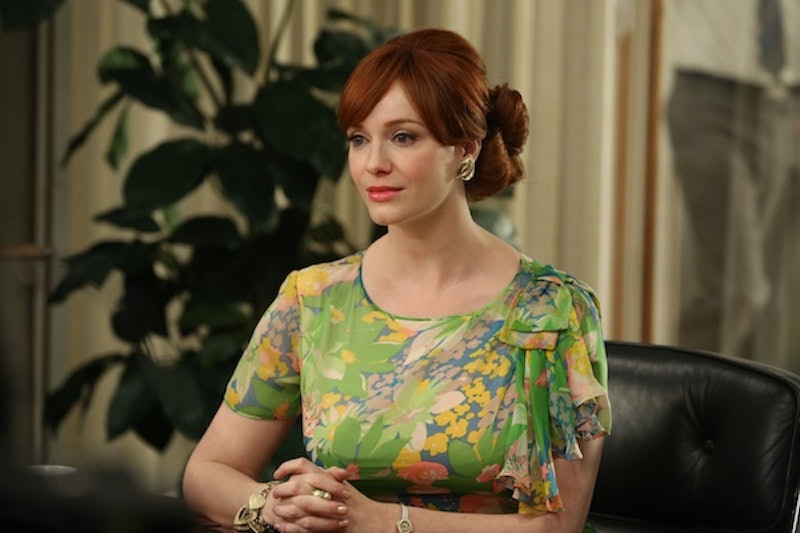 As the entitled men of Sterling Cooper Draper Pryce Cutler Gleason Chaough were busy squabbling over who would get top billing for their firm's new name on last night's episode of Mad Men, the hardworking Peggy and Joan were fighting to even be acknowledged by their peers. To quote the great Talking Heads, "Same as it ever was."

While blatant sexism for the female associates hasn't changed nearly enough over the past few years on Madison Avenue, the evolution of Peggy and Joan — both as individuals and unexpected work allies — most certainly has. And for any fan of Mad Men it's been a dream come true. Don Draper, Roger Sterling, and co. may get all the glory (for now), but Peggy and Joan have been the heart and soul of the whole operation.

Last week, Peggy dealt with both Don and Ted physically and metaphorically shutting their doors on her (Matthew Weiner sure does love his door metaphors), but, this week, Joan finally — FINALLY — got some screen time and took her matters into her own hands. After unexpectedly finding herself in a meeting with Avon, Joan becomes infuriated, and rightly so, when Pete later attempts to take the client on. It's just the way things are done around there, you see.

Except that it was Joan who got Avon interested in the first place and after the sacrifice she had to make for Jaguar (we're still shuddering), she was ready to take her piece of the SCDPCGC pie.

Joan eked Pete out of a follow-up meeting with Avon, but Peggy was there to witness the bold, albeit risky move. It wasn't even a power play on Joan's move, so much as taking her power into her own hands.

Peggy called out Joan, telling her the maneuver was mistake. Now, Peggy and Joan having a disagreement is nothing new, but their dynamics have shifted drastically. Where Joan would have yelled at Peggy back in Season 1 for any kind of "slip-up" (as Peggy pointed out during their squabble), Peggy is now in the position to give Joan a piece of her mind and talk openly about her own struggles of climbing to the top.

Still, when Pete found out about Joan's secret meeting and threw one of his patented Pete Campbell tantrums, bringing Ted into the mix, and scolding her (for a few brief, terrifying moments it seemed like Joan might get fired and the defeated look on her face was nothing short of devastating), Peggy came to her rescue and interrupted the verbal lashing with a pretend call from Avon. Not because Joan needs "rescuing" per se, but because these two have grown to depend on each other. That said, I hope for Joan and Peggy's sake Avon really does call.

While the men of their office get to proceed with business as usual (their pow-wow after Don's engagement announcement to Megan is one of my favorite scenes from the series), these two have to keep fighting. And while they are both smart and strong, the support they have for each other, no matter how subtle, is more than the crumbs of appreciation their male counterparts have given them over the years.

As Don and Pete and Roger keep attempting to escape their realities (hey, it was the 60s, maaaaaan), Joan and Peggy keep fighting the current of a tide that will soon shift. In fact, if these two continue to join forces, the boys may have to add Olson and Harris on that nameplate, too.