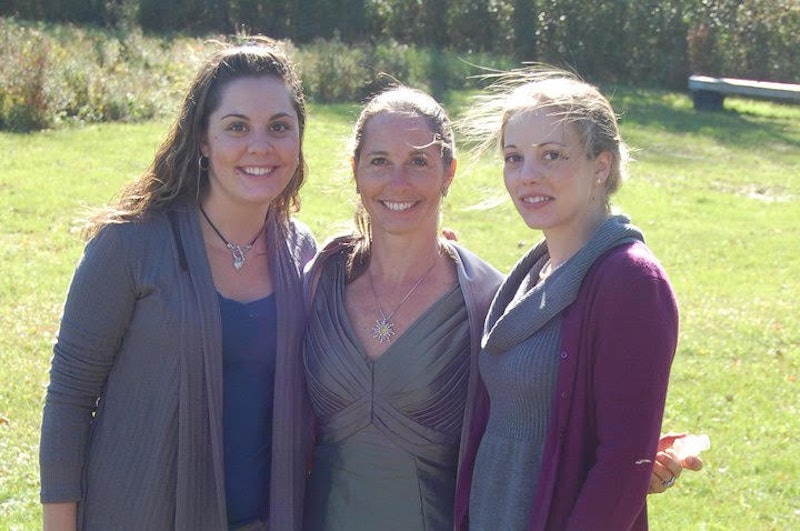 My mom was the principal who was killed in the Sandy Hook shooting in December 2012 — but that's not the way I want her remembered. Instead, I'd like you to know that my mom was tiny, but fierce. She was also hilarious, and loved to tease me. She loved to tell a story about the time I broke my thumb, and how on the way to the doctor to finally get the cast off, I slammed the car door on my hand and fractured my wrist. She thought it was hilarious; she called me Bruiser.

It's embarrassing to admit, but before the Sandy Hook massacre, I was kind of naive. Yes, of course I knew about Columbine. I knew about Virginia Tech, and I knew about Aurora. But I only knew about what was shown on the news in the days immediately after a shooting. I didn't know about how bad policies contributed to those shootings. I had no idea that you could go and buy a gun online without a background check. I didn't know that was even a thing that was possible, let alone legal. The Sandy Hook shooter may have used his mother's legally-bought guns, but that doesn't mean that background checks or closing guns loopholes wouldn't have made a difference in myriad of other mass shootings.

After my mom was murdered, I did a 180. I became almost obsessed with learning everything I could about our gun laws in the early months after my mom's death. And I was really taken aback to learn just how lax they are. I saw on the news in the weeks after the shooting that there was potential for a background check bill, and that it would be a new proposal coming up in the Senate. I saw that there were a couple of Republican senators who were threatening to filibuster. Prior to my mom's death, I wasn't really a political person — I mean, my mom had to remind me to vote on Election Day. I had no idea what a filibuster was, so I did some research and I was like, "Hey! They're actually saying that this bill is something that doesn't even deserve a vote." I think that's what drew me into activism.

[The senator] literally said, "Well, Erica, I think you and I both know that a background check wouldn't have stopped what happened at Sandy Hook," and completely ignored my question about background checks and started talking about focusing on mental health instead. I immediately walked out of the town hall meeting.

I started by trying to contact the senators who were saying that gun violence prevention wasn't something worth voting on. I was sending them emails and calling their offices, and not getting any responses. I think there were only two or three of those senators who actually did call me back and hear me out. I spent weeks on the Hill having meetings with the senators who would see me, sharing my story with them, just trying to urge them to not only to vote on the issue, but to vote the right way— to vote on the side of public safety common sense. If you're going to sell any type of firearm, there should be a background check to ensure that the person you're selling it to isn't dangerous.

You'd think that would be a no-brainer, but for a great number of American politicians, it's not.

I remember I once drove up to a town hall meeting that was hosted by a Republican senator back in the spring of 2013. I was sitting with many of her constituents, and I asked her why she thought the burden of a background check was more important than the burden of my mother being gunned down in the hall of an elementary school. She responded with an incredibly callous and crude comment. She literally said, "Well, Erica, I think you and I both know that a background check wouldn't have stopped what happened at Sandy Hook," and completely ignored my question about background checks and started talking about focusing on mental health instead. I immediately walked out of the town hall meeting.

It's moments like that one that make my work really difficult sometimes. Not only am I grieving the murder of my mother, which happened in a super public way — I now do this advocacy work for a living, working as the Senior Outreach Associate at Everytown for Gun Safety.

Some states do have really good gun laws and require background checks on every gun sale. The problem is that guns don't abide by state lines. It's easy for someone to drive to Indiana and then bring a gun back to Illinois, which is a large part of the problem there.

When I first got into this, it was about not letting my mother's death be in vain, and wanting people to think of her as more than just the principal who was shot and killed at Sandy Hook. I wanted people to hear her name and think about her beautiful smile, to know what her favorite book was, to know how much she loved teaching, how much she loved her children and grandchildren. As I got more and more involved, I started meeting with people who had similar stories to mine, but also with people whose stories were very different; people whose family members had killed themselves with a gun, and survivors of gun violence. I started to realize that this was not just about my mom anymore. This is about all of our safety.

There is no one solution that is going to stop gun violence. I think the argument that I get the most against gun safety is, "Well, it's a mental health issue." But, even if we did have the best mental health system in the entire world and unlimited funding, what does that matter if there's not a background check on every gun sale? Why would we put all of this money into the mental health funding without first closing the terror gap and the Charleston loophole, without making sure there's a background check for every gun sale? It's easy for someone to drive to Indiana and then bring a gun back to Illinois, which is a large part of where our problem is. There's a part of the I-95 corridor that's called the Iron Pipeline, and it's called that for a reason.

So when the Democrats staged a nearly 26-hour sit-in in the House and a filibuster in the Senate to push for a vote on expanding background checks earlier this month, I felt that we really saw history happen. The historic filibuster was held by my home state senator and personal hero, Chris Murphy, and though Democrats failed to convince Republicans to vote on expanded gun safety measures, I think we're seeing that our leaders are finally taking action about the failure of Congress, and that they are really trying to stop the deadly toll of gun violence in America. Politicians haven't met the urgency and demands of their constituents in years, and I think that's particularly shameful, especially the week after the worst mass shooting in modern history.

If you also find it shameful, I think the best thing to do is use what you have. Everybody has a voice. You can text "Disarm Hate" to 64433 and it will prompt you through calling your representatives so you can let them know that you want a vote on the terror gap as well as expanded background checks. I think that, in the immediate, is the best thing that we can all do. Of course, you should also use your voting power. Turn out to the polls in November. Remember in November how your elected leaders acted, and vote on this issue.

It's too late for my mom. There's nothing I could ever do or say that could bring her back, but there are so many things we can all do to help prevent future murders like hers from happening, and to stop the epidemic of gun violence that claims over 90 lives every single day in our country. We can hold our leaders accountable, and demand a safer country for all of us. For that, it's not too late.

As Told To Rachel Krantz