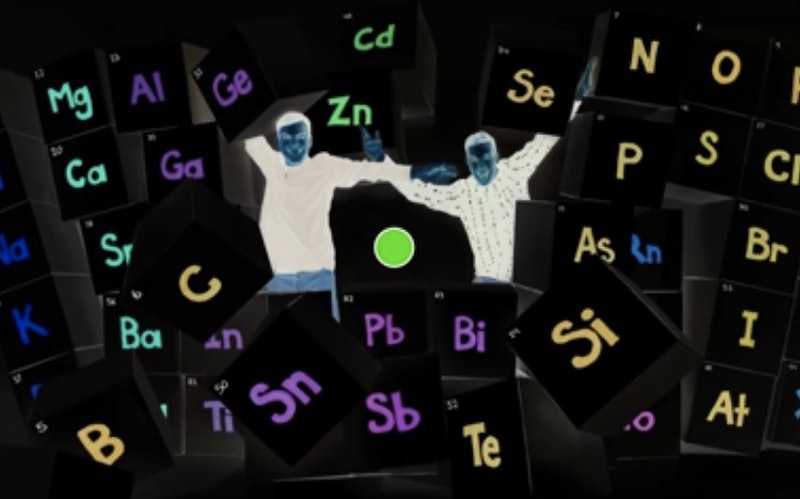 Ah, optical illusions — who doesn't love to be freaked out by their own brain? I sure do; the human brain is a fascinating thing. There's a lot of incredibly cool science behind optical illusions, too, so in case you've ever been curious about how they work, there's plenty of information available about it. Take, for instance, this one: How does the colored dot optical illusion work? A video from AsapSCIENCE that explains the whole thing is currently making the rounds; in fact, at the time of this writing, it's racked up more than 1.6 million views since it was posted on YouTube on June 23. That's how you know it's going to be good.

Anyone who loves to get into heated debates with friends and family over the color of The Dress, or get stumped over hidden imagery in brick walls, is going to jump at the chance to learn exactly what can affect the way in which our eyes send messages to our brain when recognising optical illusions. But first, it helps to understand how our brains process the colors we see in everyday life. According to Live Science, we perceive color due to special cells in our retina, called cones — and most of us have 6 to 7 million of these. When we look at an object, what we're actually seeing is light that's bounced off it and entered our eye, and which then gets converted into electrical impulses which the brain can turn into an image we can process.

So when when light hits an object and enters our eye, it stimulates these cones to varying degrees, depending on where the light sits on the electromagnetic light spectrum, which constitutes visible light. About 64 percent of our cones respond most strongly to red light, while about a third are set off the most by green light. Another two percent respond to blue light the most. Who knew?

Optical illusions, meanwhile deceive us by using color, light, and patterns. Each individual illusion might work in a different way, depending on the image in question; overall, though, their effects result from our eyes gathering all those colors, lights, and patterns, only to have the brain process them differently, creating a reality which does not match the true picture. Or, as Optics4kids puts it, "Optical illusions occur because our brain is trying to interpret what we see and make sense of the world around us. Optical illusions simply trick our brains into seeing things which may or may not be real."

With the video below, our brain creates an illusion known as an "after image". You know that weird feeling where a dot floats in your eye after you've been looking at a light source, like a camera flash? That's one example of after imaging; your eyes are exposed to a color for a long period making the cones fatigued and creating an inversely colored image when you look away.

For a full explanation, check out our break-down below and watch the video yourself.

1. First, Look At This Photo

First, look at this photo of these guys and the periodic table. Humans have "trichromatic vision," meaning we have three cone cells in our retinas; these cone cells are "each sensitive to different wavelengths of light: Blue, green, or red." It's how we see the photo as a full-color image.

2. Then, Look At The Green Dot Here

The original photo's colors have been inverted here, and a green dot has been added to the middle. Focus on this green dot. (I'd recommend pausing the video for longer than the time they give you to stare at it, because the first couple of times it didn't work for me in the time allotted.)

3. Now Look At This Photo

After you're done staring at the green dot, the video changes to a third version of the same photo: A black and white one. But, right when the image changes, you'll momentarily "see" the first, full color one, with the red-colored part of the image jumping out at you first. It's kind of like the full color image flashes before your eyes really quickly before you realize that, no, you're actually looking at a black and white picture. Freaky!

4. So Why Does This Happen?

Simply put, your retinas get tired. When staring at a brightly colored image for long enough, your cone cells grow "fatigued" and stop sending signals to the brain. In this illusion, it was the cyan-colored writing on the left of the photo that helped trick your brain. Your green and blue cones became tired, whilst there was increased activity in your unfatigued red cones. So when the image switched, it appeared that the red part of the photo jumped out at us first.

This color-processing phenomena happens with many different living organisms; some people think the reason men prefer cyan colors and women prefer redder colors is due to evolutionary science, for example. (Apparently some of the first female humans were biologically predisposed to spot ripe red berries against green leaves, according to the makes of the video).

Nor are humans the only ones for whom this is true. For example, flowers have evolved to ensure they are pollinated by the right animals: Red ones are usually for birds, and while differently colored ones appeal to bees, which have a different visual system than birds and aren't attracted to red thingsin the same way. Fascinating stuff, right?

If you want to get a grip of the science in full, and see if your eyes will play tricks on you, check out the full video above.