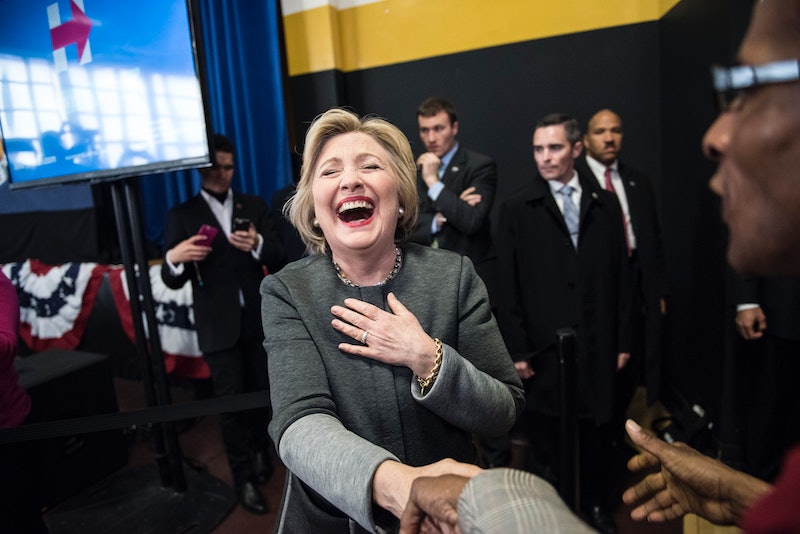 It's no surprise that confirmation bias — the idea that we absorb new information as a confirmation of our preexisting beliefs — seeps into our everyday lives. It is surprising, however, just how strongly we will twist the most unbelievable information to fit these beliefs, like the idea that Hillary Clinton emailed Vladimir Putin asking for shirtless pics. But Jimmy Kimmel Live confirmed just that when they took to the streets for a Lie Witness News sketch on Clinton, asking random passersby about specific (and completely made-up) details regarding the emails she sent from a private server as secretary of state.

All of the people Kimmel interviewed had one thing in common: They berate Clinton for lying, while also lying themselves. Asked whether they had heard that Clinton had responded to scams from Nigerian princes and requested shirtless pictures from Russian President Putin, they all heartily confirmed that, yes, they had, and these specific emails were proof positive that Clinton is a chronic liar.

The joke, of course, is on them; nowhere in the hundreds and hundreds of pages of Clinton's emails does she do anything of those things.

This confirmation bias is far more than just the butt of a joke, however. Confirmation bias affects the very headlines people are digesting, as well as how they seek them out in the first place, according to Huffington Post. This new information regarding Clinton's emails, coming as House Republicans gave their final report on Benghazi last week, could be interpreted completely differently depending on the publication you read. One publication, such as The New York Times, focused on the lack of wrongdoing on Clinton's part; The Washington Post chose to focus on the GOP's critical response to the Obama Administration in the report. The Huffington Post reasserted that this could be in large part due to confirmation bias, pointing to a 2009 paper published by the American Psychological Association that found that people are nearly twice as likely to seek out information that confirms their existing beliefs, rather than attempt to investigate and discover something that could negate those beliefs.

So it's simple: Think Clinton is guilty of the Benghazi events? Read one publication over the other. A Jimmy Kimmel Live correspondent asked whether you can believe Clinton forwarded Bill Cosby jokes through her private email? Confirmation bias already has your answer.