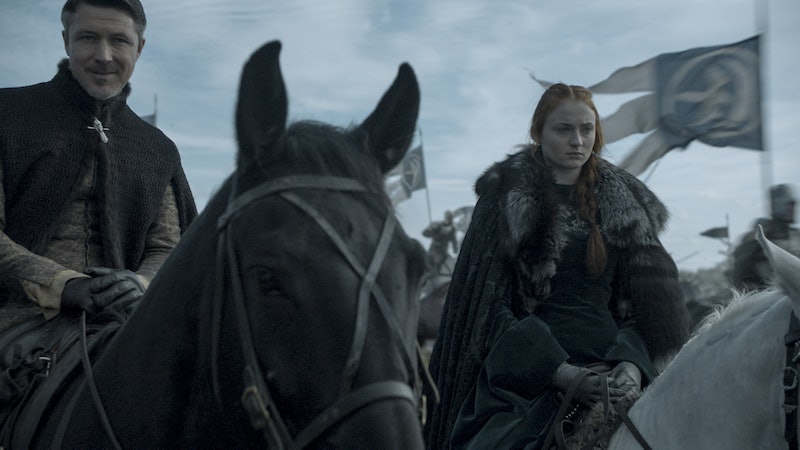 Even though Game of Thrones Season 6 made time to revisit some characters who'd been absent for a long time, like Bran and the Hound, there was one character who barely appeared in the most recent season of the show — Petyr Baelish, also known as Littlefinger. And when he did appear, it was to be verbally decimated by Sansa Stark, the one person that he mistreated most of all, and he actually seemed somewhat apologetic. Which raises the question, will Littlefinger die in Game of Thrones Season 7? He's lied, cheated, and betrayed just about every single person he's interacted with, and he has racked up quite a few enemies.

It would be both totally cathartic to see Littlefinger finally be forced to face the violence of the actions he's taken. However, it just might not fit in with the established style on Game of Thrones. It's rare that a character gets punished for their selfish, power-hungry actions. There are, however, a few exceptions — like when Arya killed seemingly the entire Frey family in the Season 6 finale. That could represent that there's a change in the power structure of Westeros, and that a character like Littlefinger might actually have to pay for his crimes in the traditional Stark manner.

However, practically speaking, I don't think Sansa or Jon Snow will be thinking about killing Littlefinger just yet. His army, the Knights of the Vale, who are commanded by his stepson, Lord Robin Arryn, just saved the Snow/Stark forces from being decimated under the Boltons. And with Cersei sitting on the Iron Throne in the south, she might want to solidify her holdings in the North, since the southern kingdoms — The Reach, home of the Tyrells, and Dorne, home of the Martells/Sand Snakes — have just decided to support Daenerys. That means that the vulnerable Northern army with either have to fight off Littlefinger's forces, figure out some way to force him out of his commanding position, or choose to maintain alliance of some kind with him, though I sincerely doubt Sansa is going to change her mind about that marriage proposal, since she's come a long way since she was first sent to King's Landing.

However, Littlefinger has been playing the Lannisters against the Northerners since Season 4, when he helped frame Sansa and Tyrion for Joffrey's murder, promising Cersei that he would find and kill Sansa. While other events have kept Littlefinger safe, this might finally be the time when he's actually vulnerable, and may need to find some real allies.

I'm not convinced that any of the characters will kill Littlefinger, particularly while he's still powerful within the Vale, which is one of the most impenetrable castles in Westeros (they're the ones with the big hole in the floor). However, the end of Season 6 proved that characters like him, who makes deals, seemingly has no loyalty, and knows the power of information, might be losing their powers. Varys and Tyrion, two similar characters, have just pledged their loyalty to Dany, a very different type of leader. And if Littlefinger doesn't also change his ways, he could wind up on the wrong side of Jon Snow's sword, Cersei's army, or even one of Dany's dragons.