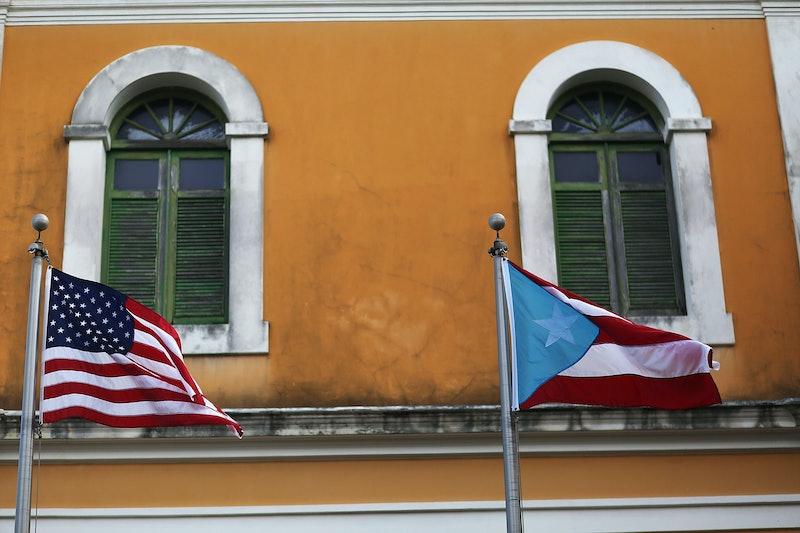 Yesterday, just before Puerto Rico defaulted on their $1.9-billion-dollar debt repayment, President Barack Obama signed a bill to help Puerto Rico restructure and pay off their $70-billion debt. The bill and the context surrounding it are complicated, so here's what to know about the Puerto Rico debt relief bill.

The Puerto Rico Oversight, Management and Economic Stability Act bill (known as PROMESA) passed the Senate the night before (after passing the House on June 9), and pressure was put on the president to sign the bill into law before the island country was set to default on their first loan payment on July 1.

PROMESA came after a decade of economic instability in Puerto Rico after American legislators ended a tax break for manufacturers on the island that led to less business. Paired with the global recession, Puerto Rico "never really recovered" from their financial woes, and instead began piling up debt as more than 12 percent of their population became unemployed.

While PROMESA is largely viewed by Americans as a boon for the island commonwealth, it's not quite as popular with Puerto Ricans themselves, and some prominent left-wing Americans are critical of it as well. Here's everything you need to know about PROMESA and the varying reactions to the act:

PROMESA Will Establish A 7-Person Economic Control Board

With PROMESA now signed into law, President Obama will soon begin to appoint an independent fiscal control board made up of four Republicans and three Democrats, and the decision will then be set for approval by Congress. The board will oversee the commonwealth's debt repayment and will have "the ability to override decisions made by the Puerto Rican government," according to the Council on Hemispheric Affairs. It will also give them control over important spending items like pensions and the minimum wage.

It Has A Lot of Issues

Pedro Pierluisi, Congress' Resident Commissioner for Puerto Rico (who doesn't participate in votes), put it best in his tacit support of PROMESA: It may be necessary to help the commonwealth out of their debt, but as long as his "constituents are treated like second-class citizens, Puerto Rico will never have a first-class economy.”

PROMESA has a laundry list of issues: It grants too much power to the control board in charge of restructuring Puerto Rico's debt by allowing their decisions to override the Puerto Rican government, which can potentially result in censure or imprisonment for officials who dissent; it reduces the minimum wage to $4.25 for workers between the ages of 20 and 24 (significantly lower than the American minimum wage of $7.25); it privatizes thousands of acres of a formerly national wildlife refuge, thus opening it up to potentially being decimated; and it fails to address the commonwealth's Medicaid debt.

It's Too Much, Too Late

Meghan Murphy at the New Republic was directly on point when she asserted that PROMESA is not a "lifeline," though many pundits claim the opposite. Puerto Rico has been floundering for a decade, but the only assistance offered is that of an impossibly controlling oversight board that cut the minimum wage nearly in half. Murphy also pointed out that no actual financial assistance is being offered; PROMESA is the equivalent of a rich uncle offering to help with your finances by controlling your bank account and credit card, but not actually giving you any money.

Many Puerto Ricans Were Opposed To Its Passage

Although Nuyorican Playwright Lin-Manuel Miranda (of Hamilton fame) wrote an op-ed in favor of PROMESA ahead of its consideration in the House of Representatives, many more of his countrymen were opposed to the passage of the debt relief bill. According to New Jersey Senator Robert Menendez, 69 percent of respondents to a poll conducted by El Nuevo Dia, Puerto Rico's largest newspaper, said they opposed the bill. San Juan Mayor Carmen Yulín Cruz said PROMESA leaves Puerto Rico "voiceless."

Even Puerto Rico's Gov. Alejandro García Padilla, who supported the bill to avoid defaulting on Friday's payment, seemed to be opposed to the draconian measure when he issued a moratorium on the island's debt as an attempt to get some power back from the incoming control board.

It Further Establishes Puerto Rico's Status As A "Colony"

When the House was considering their version of the PROMESA bill, New York Representative José Serrano cautioned his fellow Congresspeople not to view the act as the be-all, end-all of Puerto Rico's debt relief, telling The Atlantic:

As long as Puerto Rico is a colony, a territory of the United States, these issues will continue to come back.

Vann Newkirk III, an Atlantic writer, put it even more plainly in an article titled "Puerto Rico Belongs to Congress," writing, "There are now, simply, very few definitions by which Puerto Rico is not a colony."

With the bill's passage, more and more Puerto Ricans are taking to the streets in protest of PROMESA and of the resentment they feel towards being treated as colonial subjects.

With the passage of PROMESA, Puerto Rico will avoid defaulting on a massive debt and will have, at least on paper, the support of the American Congress as they begin to restructure their debt. But as with many "government bailouts," it comes at a cost: that of the dignity of the Puerto Rican people.

More like this
How To Fight For Reproductive Rights, Based On How Much Time You Have
By Courtney Young
LGBT+ Men Fleeing Afghanistan Were Denied Asylum By The Home Office, New Findings Show
By Sam Ramsden
Celebrities & President Biden Are Enraged By The Leaked Roe v. Wade Decision
By Alyssa Lapid
What Is Barack Obama’s Net Worth? He Makes *Way* More Now As An Ex-President
By Hugh McIntyre
Get Even More From Bustle — Sign Up For The Newsletter