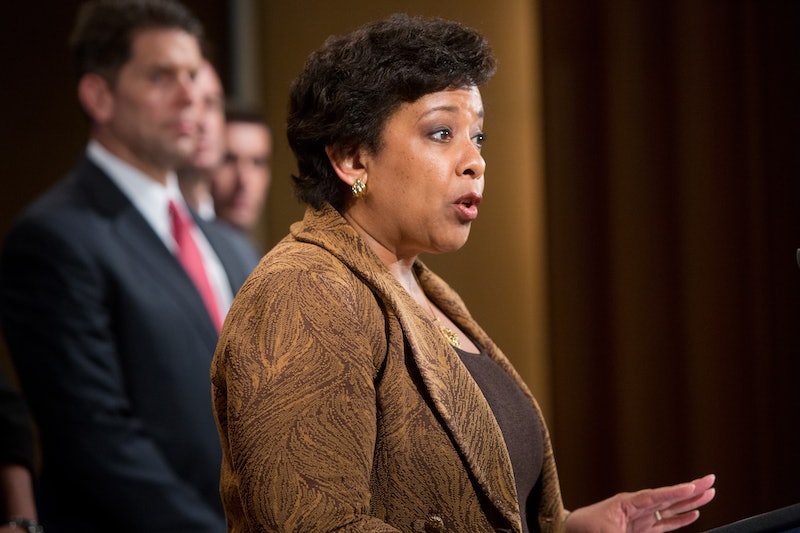 There's nothing like running into the woman who could potentially prosecute your wife to add to in-flight small talk. But small talk is reportedly exactly what ensued when former President Bill Clinton and Attorney General Loretta Lynch ran into each other at Phoenix's Sky Harbor Airport on Monday. While the meeting between Clinton and Lynch seemed awkward, some are also calling it unethical.

Lynch acknowledged the meeting and said she and former President Clinton discussed former Attorney General Janet Reno (who served during his time as president), his grandchildren, and their travels, but did not discuss the ongoing Department of Justice investigation into Hillary Clinton's response to the 2012 Benghazi attacks and the private server she used to conduct business during her time as secretary of state. All the same, some have criticized the meeting by calling it a conflict of interest on both sides. Chicago Tribune reporter John Kass said the "private meeting" is evidence of the type of "quiet, subtle and ambiguous" dealings the Clintons undertook when Bill was in office.

J. Christian Adams, a former Department of Justice lawyer, said it best: "Whenever Bill Clinton gets on a plane to meet a woman, he’s usually up to no good."

Of course, everyone pressed Lynch to reveal what the pair actually talked about and whether or not they discussed the investigation. Apparently, though, "there was no discussion of any matter pending for the department or any matter pending for any other body," which Loretta said during a June 30 meeting with reporters in Washington, D.C.

There was no discussion of Benghazi, no discussion of the State Department emails, by way of example. I would say the current news of the day was the Brexit decision, and what that might mean. And again, the department’s not involved in that or implicated in that.

But despite their claims that they didn't discuss the Benghazi email scandal, many thought it was obviously a conflict of interest for the pair to spend time together. For example, Sen. John Cornyn, a member of the Senate Judiciary Committee, said it was unwise for Lynch to meet with Clinton. "An attorney cannot represent two parties in a dispute and must avoid even the appearance of conflict." Conryn went on to discuss the matter with Fox News, this time bashing the Clintons for what he thinks is a disregard of the rules.

And even for those who believe the contents of their conversation, like David Axelrod, it was still considered not the smartest choice to even create the illusion that the two could have been colluding or talking about things they shouldn't have been discussing.

It's clear that Clinton's email scandal still looms large over many people's heads, and because of this, perhaps a private meeting between Lynch and Bill Clinton wasn't the smartest campaign move.