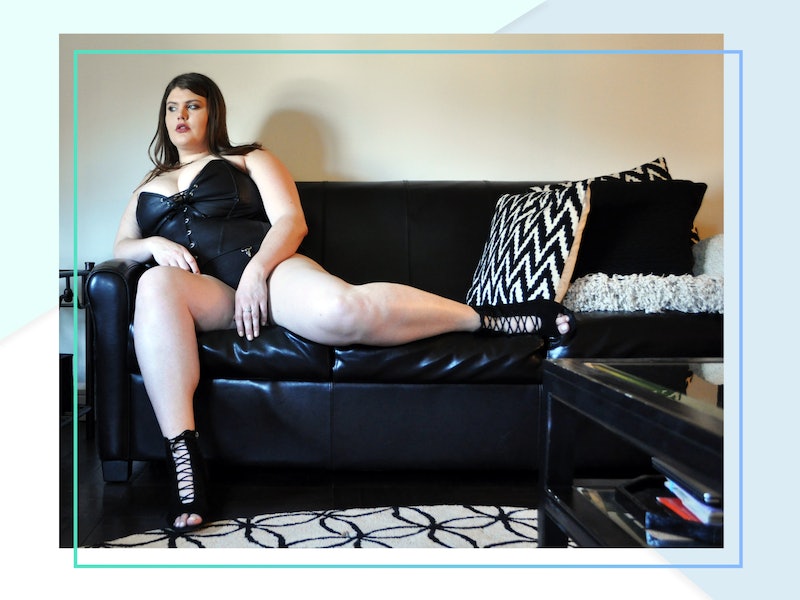 With award-winning photographer Substantia Jones of The Adipositivity Project, Bustle is launching A Body Project. A Body Project aims to shed light on the reality that "body positivity" is not a button that, once pressed, will free an individual from the horrors of beauty standards. Even the most confident of humans has at least one body part that they struggle with. By bringing together self-identified body positive advocates, all of whom have experienced marginalization for their weight, race, gender identity, ability, sexuality, or otherwise, we hope to remind folks that it's OK to not feel confident 100 percent of the time, about 100 percent of your body. But that's no reason to stop trying.

When Beck Delude walks into the room, there is no missing her. I get the feeling that — no matter where she goes, who she's with, or what she's doing — this is likely the case. The plus size blogger of Manfattan and self-described "big girl in the big city" is tall, broad, and generally big. But it's her voice and the way in which she carries her bigness that stand out most.

Delude speaks like every word matters; like privacy is a construct and intimacy is the norm. She is not the quiet-fat-girl nor the wallflower. It's not that there's anything wrong with such identities, but Delude demands to be seen.

Ten minutes into her arrival to shoot with Substantia Jones, we have already heard about at least three recent dating escapades. We've seen her step into a corset more akin to something one might find in the home dungeon of a bondage aficionado than on a burlesque stage. She exudes sexuality, regardless of living in a culture that more often than not desexualizes plus size women entirely. It's difficult to imagine Delude struggling with acceptance towards the body that allows her to move so seamlessly throughout this world. Like most humans, however, this simply isn't the case.

"Growing up, I remember being substantially bigger than my classmates," the blogger and modeling natural later tells me via email. "From my dress size, to my height, my body seemed to be imposing." We can thank standardized sexism for the belief that women and feminine people are meant to take up as little space as possible. Shrinking our bodies, our voices, our thoughts, and opinions is something many of us are conditioned to do from a young age. I can imagine a young Delude faced with the impossibility of this. She hovers over six-feet tall. She lives in a body that cannot be tamed or reduced. And such characteristics haven't always been received well.

"For a long time, when I would get asked about bullying, I would answer letting the interviewer know that I had never experienced kids bullying me. Which was true," she says. "But then I started to think about the questions much more broadly. And I realized that body shaming never came from my peers growing up, but rather from adults."

It's something a lot of fats have likely experienced. Whether we're talking about the auntie who urges us to consider drastic weight loss surgery, the grown man on Twitter begging us to put down the burgers, the mother who cannot believe how far we've let ourselves go, or the sex ed teacher who believes with all his heart that fat women never find love. Delude recounts some of these moments in her own life.

[There was the] DARE officer who refused to give me a size L shirt in front of my class because he insisted it would be too small and that I must take an XL; or the basketball coach who asked 'if I tape a Big Mac and fries to the backboard, will you jump higher?' [These were] adults who had already been scarred by society’s bullshit standards of norms. Kids, they just saw a tall, big girl who was always laughing, but adults saw something that needed to be corrected.

When adults condemn children for their bodies, they often perpetuate a false sense of self-affirmation. If Delude had been experiencing any doubts over her body — feeling at odds with it because it was so much physically larger than those of the kids around her — the comments of grownups would've only strengthened the self-doubt. "Hearing adults condemn my body made [the criticism] feel more valid, because hey, they’re adults," she adds.

Despite the criticism of the adults around her, Delude was eventually able to cultivate a loving relationship with the body she was in. It was actually through experiencing a variety of physical movements and learning to utilize her body in unique ways that she was able to eschew such commentary in favor of a more peaceful existence. Sports are often triggering for the plus size (things we're told to become involved in in order to "get healthy" or "lose weight" or "prove our worth," only to then be chastised for our involvement because "nobody wants to see a jiggly fatty run"), but Delude found comfort in athletics.

"Despite that one Big Mac comment, playing sports in middle, high school, and college was an incredible way to not only accept my big body, but also appreciate everything it could do," she tells me. "I was/am fat, yes, but I’m also a basketball player, who can run, jump, shoot, score, and defend with the rest of them. And that is empowering."

Today, being comfortable in her adult body is largely correlated to the sexuality so evident in her every move. Delude enjoys "being able to command attention because of [her] stature," and her presence is one I imagine greatly influences what seems to be a whirlwind of a dating life.

To hear a self-identified fat woman own her inherent sexuality as well as her desire to utilize that sexuality is refreshing. Do the pesky adults who bullied her into believing that shrinking should've been of utmost priority in her life still pop into her head from time to time? Sure. She just doesn't let them stick around.

Although participating in sports and embracing her tangible sexuality were core choices in Delude's building of self-love, the reality is that athletics in particular aren't for everyone, while sexuality and our relationships to it vary infinitely person to person. There is another tool, however — a rather universal one — that this blogger has utilized as a reminder of just how brilliant she is: selfies.

"Taking pictures is one of the most empowering things I can think of," Delude tells me. "Selfies are one of the major ways I learned to really deeply love myself ... Start taking a selfie every day, even when you don’t look your best, and start to notice your eye shape, the way your lips curl at the edge, how awesome your eyelashes are, or how unique your face shape is. Find the little things you love to start building the full picture of self-acceptance."

In the age of the smart phone, the selfie is at the disposal of almost every person with a mobile device. In just a few seconds, you can snap a picture of yourself that you have total and complete control over. You get to decide how to present yourself in that moment. You get to decide to celebrate your face, your body, or whatever else makes you feel badass.

When we are feeling disillusioned about our bodies — be it the entirety of them or one specific quality, like our stature — it's crucial to spend some time with those bodies. Put on a lace-up leather corset. Take a selfie. Revel in the things this body allows you to do. Revel in everything you've been told to hate. And slowly, you might realize that there was never any reason not to be in love with yourself.

With Editorial Oversight By Kara McGrath and Marie Southard Ospina

More like this
What’s The Kibbe Body Type Test That’s All Over TikTok?
By Marilyn La Jeunesse
The Most Gorgeous Plus-Size Looks From The Met Gala
By Dominique Norman
How Sunnies Face Is Championing Filipino Beauty
By Kristin Corpuz
How This Founder Manifested Ariana Grande As A Brand Ambassador
By Dominique Norman
Get Even More From Bustle — Sign Up For The Newsletter