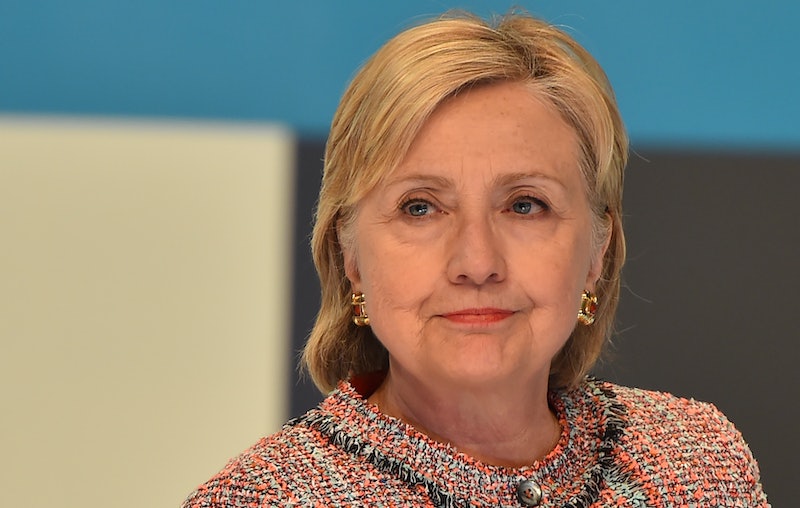 The possibility of an FBI indictment of Hillary Clinton is back in the spotlight after her husband, Bill, paid a friendly visit to Attorney General Loretta Lynch at the Phoenix airport. Republicans pounced on the meeting, saying Lynch should recuse herself from overseeing the case against Hillary because the independence of the investigation had been compromised. On Friday, Lynch said she would not recuse herself but would take the recommendation of the career prosecutors who are assigned to the case. She said she wants to handle the investigation like any other case. But what would happen if Clinton were indicted?

It's still a long shot. Agents haven't interviewed Clinton, but that will likely be the last step in their investigation. The FBI recommendation on whether or not to indict is expected within weeks. What happens would depend largely on the timing — specifically whether it happens before or after the Democratic National Convention. Currently Clinton has the majority of pledged delegates, but as Bernie Sanders has regularly pointed out, she only has an overall majority when counting superdelegates. They're free to jump ship at any point before the July 25 convention in Philadelphia. The vast majority support Clinton, but that could change if she were indicted.

Clinton herself could decide to withdraw her name from consideration for the nomination, but she wouldn't have to. She has said there is "absolutely" no chance the FBI investigation will hurt her presidential bid. If she didn't withdraw, then it would depend on the superdelegates' loyalty. But if they don't go for her, they wouldn't necessarily hand Sanders the nomination. They could try to hand the nomination to a third candidate like Joe Biden. That would likely infuriate Sanders supporters, many of whom have been rooting for a possible indictment.

If an indictment came after the Democratic National Convention, she would have no legal obligation to withdraw her name from consideration. She would not be disqualified. Michael Mukasey, former attorney general under George W. Bush, told The Washington Examiner there would be no legal reason she would have to quit the race. "The Constitution lists the qualifications for the presidency. And if you add anything else, it would be unconstitutional," he said. She would have every right to continue to campaign, and could very well do so.

In fact, a Rasmussen poll showed some 71 percent of Democrats think that she should continue on even if she's indicted. Republicans and independents would be less thrilled, but a full half of all voters said she should keep running. If she did decide to drop out, it would be unprecedented. No candidate has ever withdrawn their name from nomination in the history of the United States. There are rules, though, that would dictate what happens next.

The National Committee Chair, currently Debbie Wasserman Schultz, would call a special meeting, and the committee would vote on a replacement, assuming they reached a quorum of 50 percent. They would not be limited by those who ran in the primary and could easily choose someone besides Sanders — again, if they're willing to risk his supporters' wrath.

The final possibility is that Clinton could be indicted after winning the November election. Then she would face potential impeachment, depending on the makeup of Congress at the time. The idea is far-fetched, but if right-wing Republicans hold enough sway in the House of Representatives, there's no saying. It's a long shot but legally it's possible.

All of this, of course, stems from Clinton's use of a private email server. She has said it was a mistake and the State Department has found that she broke multiple rules by doing so. But does it constitute a crime? Perhaps the answer is "kind of." Douglas Cox, associate professor at City University of New York School of Law, told The Guardian, "I believe Clinton did break the law, but at the same time I don’t think there’s evidence she committed a crime." He thinks prosecution would need to argue her intent in court, which would be difficult.

In any case, now the decision on whether to indict or not is up to the prosecutors on the case. Lynch should be confident in their abilities; she was a veteran prosecutor before being tapped for the top job by President Obama. This was the plan even before the meeting with Bill Clinton, she said, but the resulting political furor made it unavoidable. Other past, politically charged cases have been decided the same way. Clinton might be confident she did nothing wrong, but nonetheless she and her campaign would surely welcome the official "all clear."