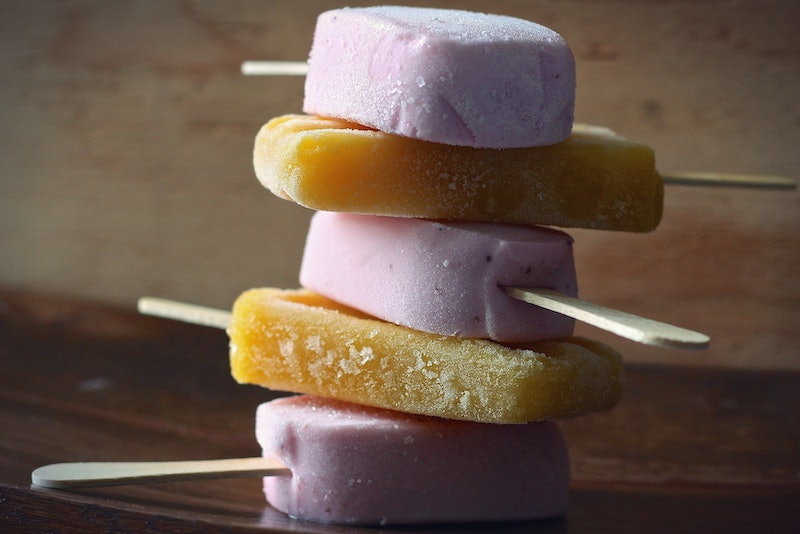 The popsicles sell for $4 a piece at the artisanal bone broth purveyor Springbone Kitchen, but don't expect these pops to taste like a strip steak, founder Jordan Feldman warns. The flavor of the meaty liquid is balanced by the addition of pomegranate juice, coconut milk, raspberry puree, and a touch of maple syrup (honestly, that sounds like it would make a pretty tasty and healthy pop on its own). The fruit makes the popsicles fairly sweet, hopefully taking your mind off the fact that you are licking a collagen-packed stock typically suited to a hot soup. The hearty broth is masked, Feldman told The New York Post, "It’s there, but it’s totally overwhelmed by the other flavors."

We have seen savory ingredients used in ice creams before; you don't have to go too far to find olive oil gelato, and blue cheese or even maple-bacon ice cream in specialty shops. But unlike these icy concoctions, the broth isn't included for flavor, but for its health benefits.

It seems broth is not just for staving off a winter cold any more. The popularity of bone broth as a health boosting elixir has only grown over the years. The owners of Springbone post on the restaurant's website that the high amount of collagen and gelatin in the bone brew can boost healthy hair and nails and improve skin complexion. The compounds and minerals aid with joint health, have anti-inflammatory properties, and are easy to digest.

Each pop includes one-third of a cup of broth, but whether that is enough to endow you with any significant health benefit is unclear. Feldman told The New York Post that he tries to drink at least a cup of broth a day, but that can be problematic when the last thing you want in 80 degree heat is a steaming soup. Feldman attempted to find a better way to ingest the broth: "We tried some cold broth, but we had to dilute [it], otherwise it’s too gelatinous ­— it’s like Jell-O. It took away a lot of the flavor … Then we thought, 'Let’s freeze it.'"

According to BuzzFeed, the ice pops do not really taste like meat at all, which may leave some consumers disappointed. As to whether or not these grass-fed, organic beef bone broth ice pops are gonna be the newest food craze, we shall have to try them and see!