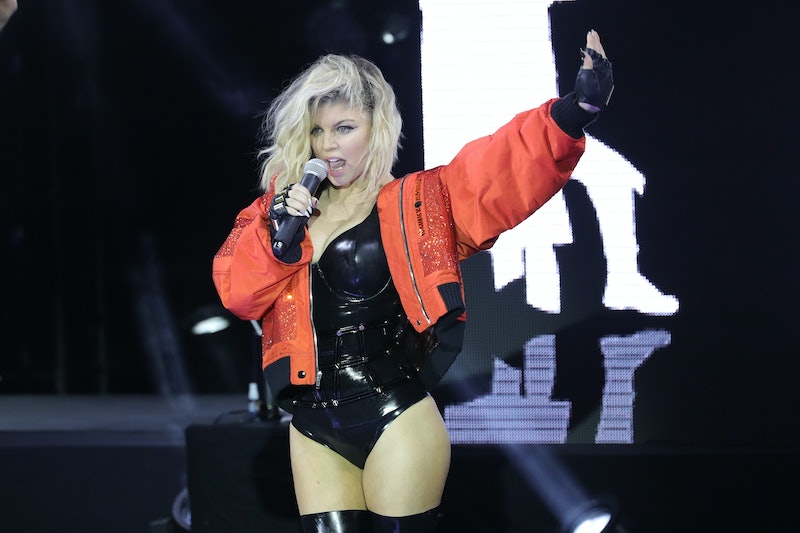 Fergie's new single, "M.I.L.F $" (pronounced "MILF Money"), is undeniably catchy but also totally confusing. The meaning of the "M.I.L.F $" lyrics is all over the place, with lines revealing themes as diverse as mature-lady-sexuality, dairy products and, um, what sounds a lot like sex work. These elements jostle up against each other in the song, but that doesn't seem to bother anyone as much of the media has been quick to proclaim as the summer anthem of 2016. But hey, we could have seen this coming. The title says it all, doesn't it? The extra $ tacked onto the end, the periods between letters, as if to remind us that the word is an acronym (Mother I'd Like To...well, you know). Were we really expecting a work of lyrical clarity with a title like that?

Still, call me an optimist, but I firmly believe that there must be some small kernels of meaning amongst the rhythmic nonsense. There's no way the cream of America's songwriting industry could have just written an extremely catchy piece of nonsense to troll innocent entertainment journalists. Let's do this together. Take a deep breath, take my hand and let's navigate the twisted path of Fergie's lyrics. This single was a decade in the making — it must mean something. Right? Something about motherhood, clubbing, working and, um, milk money?

Heard you in the mood for a little milkshakeWelcome to the dairy dutchess love factoryI could whip it up, fix you up straight awayCome on in the front door, love in the back doorWhip it, flip it, hey!Been working extra service to give it to yaDidn't mean to make you nervous you motherf*cker

OK, so this makes clear reference to the Kelis hit, "Milkshake," in which we can agree the milkshake that brings the boys to the yard isn't an actual delicious beverage blending together ice cream with more dairy, but is a metaphor for female sexuality and attractiveness. So, if we take "Milkshake" as a jumping off point, maybe this verse isn't as impenetrable as it first seems. Fergie's so hot she runs the "dairy dutchess love factory." I'll leave you to draw your own conclusions about what the niche door system in this establishment implies. But I'd argue "fix it up straight away" implies Fergie's all about instant gratification in this song.

Me and the girls, up in the clubHating ass hoes but I don't give a fuckRunning them upI been working all week, now where the hell is my drink?Hair and nails is on fleekAll my girls on fleekI-N-D-E-P-E-N-D-E-N-TDo you know what that means?Can't see me, D-O-R-KI'm P-A-I-DYou heard about me, I'm saying

I don't know, Fergie. I'm doing my best, but you're really pushing me here. This feels lyrically like a verse from an entirely different song. I thought we were running with the dairy metaphors and now all of a sudden we're in a club. I thought everything was a metaphor, but now we're into deep realism: "I been working all week, now where the hell is my drink?" implies the dairy duchess love factory of verse one is an actual factory. What happens in the factory? Do they put together dairy duchesses? Is it a factory of love? Oh, I don't know anymore. But note the tone Fergie addresses the implied male listener in — in the last verse he was a "motherf*cker," here he's a "D-O-R-K." Is this how romancing goes these days? I guess this must be a purely bodily connection rather than an entwining of hearts and souls.

I've been wearin' this upI've been tippin' this cupI've been waiting my turnI've been working so hardGot my spirit turnt up and I can't stop nowI've been running so longI been vibing so strongI want it, I need it, I got it for realI love it, I want itI feel it, it's realAnd mama I did it, it's time to hear meMan I did it, don't forget it, motherf*cker I'm ill

Translation: Fergie is one hard-working entertainer. What does she love, what does she want? Despite the sexual overtones of the previous two verses and the chorus, I'd argue what Fergie really wants here is her career. It's both the thing that drives her and the thing she's aiming for. She's #blessed to be doing the thing she's really passionate about: singing and performing.

In short, OK, I was wrong, you were right: this song is lyrically incoherent and it's hard to find uniting themes. But if you insist, then, hard work, sexual attraction, and looking good in the club. And the fact that it took me all this time to figure it out is just fine because you're probably not listening to "M.I.L.F $" for its lyrics, but for its catchy, summer-ready melody.

More like this
What Makes A Sally Rooney Sex Scene So Hot?
By Samantha Leach
Long Live Bennifer!
By Allie Jones
BTS Is Visiting The White House To Discuss Anti-Asian Hate Crimes With President Joe Biden
By Jake Viswanath
Harry Styles Performed A Snippet Of Taylor Swift’s “22” & The Crowd Went Wild
By Jake Viswanath
Get Even More From Bustle — Sign Up For The Newsletter