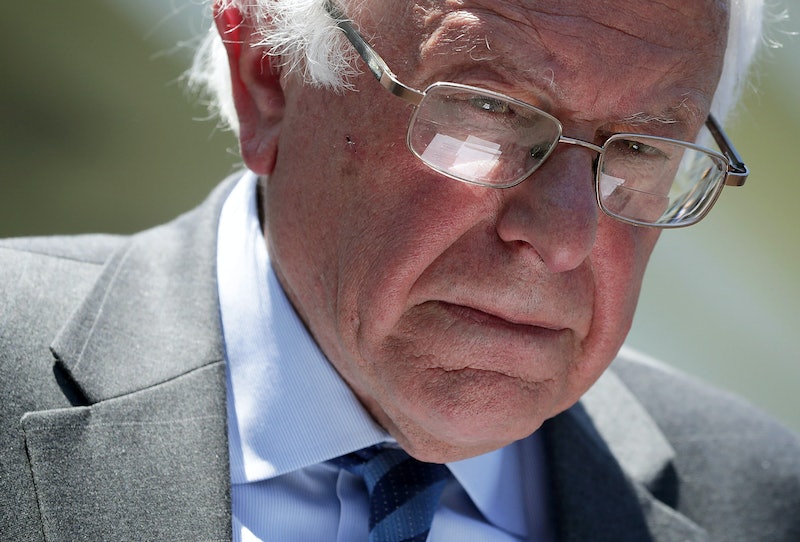 On Friday in a press conference, Attorney General Loretta Lynch vowed to "accept" investigators' and prosecutors' recommendations regarding whether to indict presumptive Democratic nominee Hillary Clinton's alleged use of an insecure email server. This announcement set aside whisperings that Lynch would be a safety net for Clinton if an indictment was recommended, particularly in light of a certain tarmac rendezvous with Bill. While Clinton waits to hear her fate, some wonder if an indictment would help the all-but-defunct campaign of her rival, Bernie Sanders. Looking at the inevitable domino reaction that could come with an indicted presidential candidate, the question becomes, could Sanders become the nominee if Clinton is indicted?

Let's start with what happens to Clinton if she is indicted. Nothing in the Constitution says Clinton has to step down if she is indicted. In fact, as long as Clinton is still a natural-born citizen, over the age of 35, that has been living in the United States for at least the last 14 years, she can still be president. However, like anyone who has ever gotten turned down for a job, just because you meet the basic qualifications, doesn't mean you will get the gig. Clinton has a solid but not huge lead in recent polls over presumptive Republican nominee Donald Trump; Fox News has her polling at 44 percent to Trump's 38. With that standing, she would likely be pressured by Democrats to step down and make way for a less tarnished candidate — no doubt to Trump yelling, "Crooked. Crooked" while ringing a bell, à la Cersei Lannister's walk of atonement.

While there is a chance Clinton will try to soldier on, that doesn't mean the whole Democratic party establishment won't abandon her. In the Game of Presidents, the unbound superdelegates become the key. With 2,383 delegates needed to win, Clinton has far surpassed the threshold with 2,811 delegates — 591 of which are unpledged "superdelegates." Sanders has 1,879, which includes 48 superdelegates. Sure, if every single one of Clinton's superdelegates changed their mind and swung over to Sanders, the Vermont senator would have a shot.

However, shockingly, it's possible the establishment won't want a candidate determined to go against the establishment. Instead, Mark Jones, a fellow at Rice University's Baker Institute for Public Policy, told The Washington Examiner in February, that if Clinton were indicted, he wouldn't be surprised to see a brokered convention — but not one with Sanders finishing on top. "At that point, we would see a brokered convention, where the most likely scenario would be that someone other than Sanders would be the Democratic nominee," Jones told the publication. "It could be Elizabeth Warren, it could be Andrew Cuomo, Deval Patrick, Joe Biden."

If there eventually is a Democratic vacancy on the November ticket, Sanders has no guarantee. If Clinton goes down, Sanders will be facing the very establishment he has been bucking against since he started his campaign.