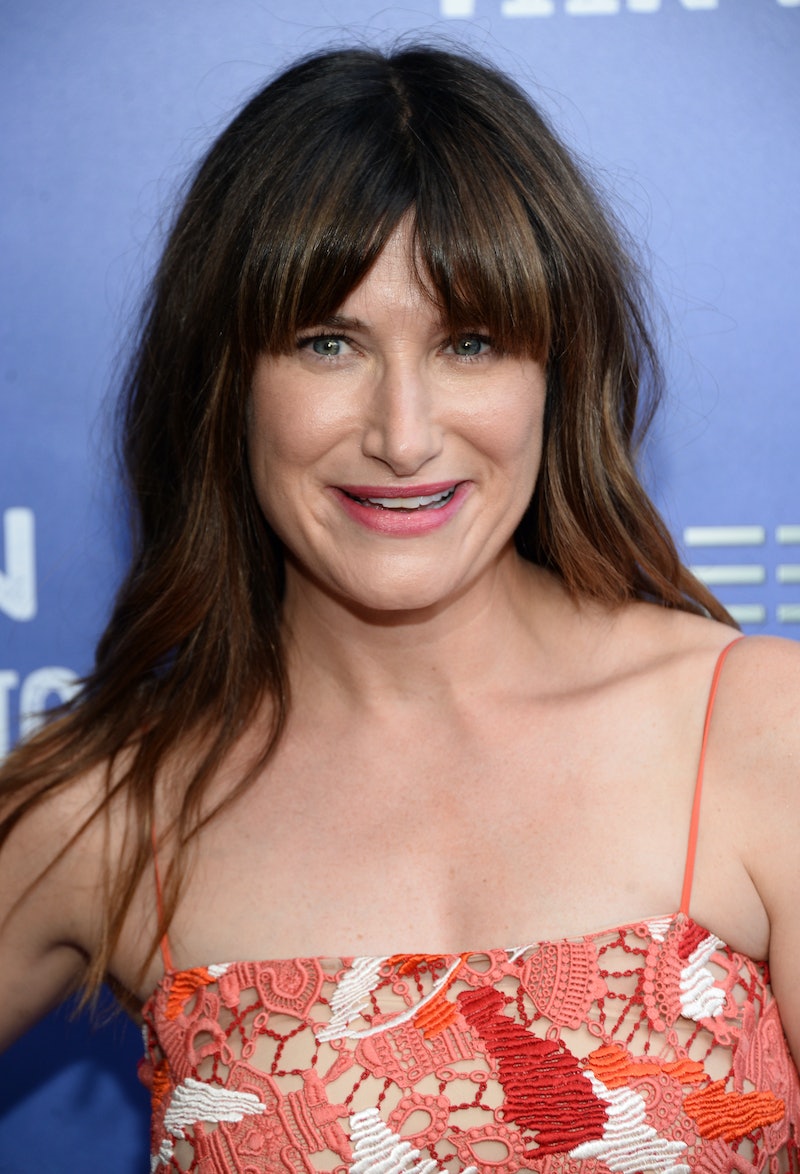 Kathryn Hahn has a case of the moms: Between being one of the awful moms in Bad Moms alongside Mila Kunis and Kristen Bell and a mom defeated by technology opposite Viggo Mortensen in Captain Fantastic , this real life mom has her hands fun. But in reality, Kathryn Hahn would love nothing more than to cozy up to her two kids and husband, secluded in a forest somewhere. The actress has lots on her plate this summer, with the upcoming debut of Bad Moms and the Sundance Film Festival favorite, Captain Fantastic. But after speaking with her for just a few brief minutes, I can tell her children are her number one priority.

“I love a road trip and a family cabin with nothing, that’s like my favorite. My happiest place,” she says. “It’s just us being together, the four of us. Making our own food and playing dumb games together, all snuggling. The thought of that makes me so happy.” That said, Hahn doesn’t let her family life interfere with her career goals, and she doesn’t feel like a bad mom for saying it.

Even while juggling such a crazy job, the 42-year-old’s love for her kids just effortlessly seeps through. “It’s going so fast,” she says of her kids’ childhood. She and her husband, fellow actor Ethan Sandler, have a nine-year-old son, Leonard and six-year-old daughter, Mae. “I still cuddle with them at the end of the night, tickle their backs. Sometimes I just get tears in my eyes and I just want to throw up with heartache because I can’t believe how fast it’s going,” she says.

As much as she cherishes her time with her little ones and would love nothing more than to create their own little world with them in the woods, as Mortensen’s character does with his kids in Captain, she also has her own life and goals to consider. “But then I also think, well, they have a mommy that loves her job, and is passionate about her job, and brings her a great amount of fulfillment and happiness, and how lucky I am to have found that,” she says. Hahn explains how allowing her kids to grow up watching her hard at work is crucial in raising them. Growing up with a working mom, I couldn't agree more.

“I would not be my whole self if I didn’t have this job. It’s a nightmare and it’s really hard for any working mom to say goodbye to your kids in the morning. It sucks,” she says. “I know that feeling, so deeply, of wanting to protect and foster and curate a person because you love them so much. Feeling helpless in the outside world despite your best intentions.” But her feelings are conflicting, to say the least. “It’s a heartbreaking feeling. And sometimes it feels good and you feel guilty about it, but then, you’re like, ‘Oh, being by myself actually feels great,’” says Hahn.

And if the working mom, who’s been in films like Step Brothers and How to Lose a Guy in 10 Days, doesn’t already get enough pressure to land roles in showbiz while balancing a family, she has the Internet to make her feel like crap. She says the motivation behind Bad Moms was to really make women think: “Why are we so hard on each other? Just seems like it’s so silly.”

Although Hahn opts out of social media because she calls herself a “grandma” when it comes to technology, the Internet still manages to get to her. Or at least it did.

There is so much pressure and expectation. So many blogs and Instagram accounts, Pinterest, so many ways in which you are held up to a standard which is just impossible to achieve. [Bad Moms] was a real cathartic roar into defying that. That was really, really fun. Because it’s impossible, the idea of ‘having it all’ is a crazy myth because you can do it all, but not everything’s gonna be the way you imagined it or as perfect as you wanted it to be.

Although she entertained the idea of letting bloggers and sites dictate how she should be a mom, she finally learned to let go and do her thing — her own way. “I was able to relax those expectations on myself and take a breath and realize not everything was gonna be perfect, and that everything was gonna get done.” Still, she doesn’t hold herself to false expectations, and most importantly, she's come to terms with the fact that she’ll mess up every once and a while. “I was gonna fail in some department all the time, something was gonna give. Once I realized that’s OK, that’s just what it is, then I slept so much better,” she explains.

When speaking with the star, I realize just how innately selfish I, and we, all are. I love my freedom, being able to grab a coffee, catch a movie alone, or go shop whenever I want. Mothers don’t always have that luxury. Hahn admits that wanting to spend time by herself still makes her feel guilty.

“You’re constantly weighing so many different things like, ‘OK, if I go out and have a meal with my friend who I haven’t seen in a gazillion years on this night off, then that means I’m gonna be this much more tired when everybody wakes up tomorrow morning and I try to get them to school,’” she says. She won’t lie that alone time is something she constantly craves. “My husband and I would laugh, we would walk by couples reading New York Times on a Sunday spread out at 11 and we’re like, ‘Ugh, f*ck you,’” she says, laughing. “Just to eat a meal by myself is such a luxury.”

I love that Hahn doesn’t sugarcoat what motherhood really looks like. “Still, I wouldn’t trade it for the world,” she says. And even though it can get messy, she explains that she embraces it all. “It’s a beautiful mess, it’s just a huge, beautiful mess. Sometimes I hate my kids, sometimes I love my kids. I mean I always love my kids, but sometimes they drive me so crazy. It’s just controlled chaos.”

At the end of the day, she’s doing the best she can, knows she’ll mess up, and can at least laugh at herself about it. And all of this while scoring roles in huge films left and right? Not too shabby, I'd say.

More like this
9 Photos Of Celebrity Couples & Unexpected Duos At The 2023 Grammys
By Jake Viswanath
Bennifer's Relationship Timeline Now Includes A Grammy Date Night
By Jake Viswanath
The History Of Taylor Swift's "All Too Well" & What The Lyrics Actually Mean
By Jake Viswanath
Vanessa Hudgens Is Reportedly Engaged To Cole Tucker
By Jake Viswanath
Get Even More From Bustle — Sign Up For The Newsletter
From hair trends to relationship advice, our daily newsletter has everything you need to sound like a person who’s on TikTok, even if you aren’t.