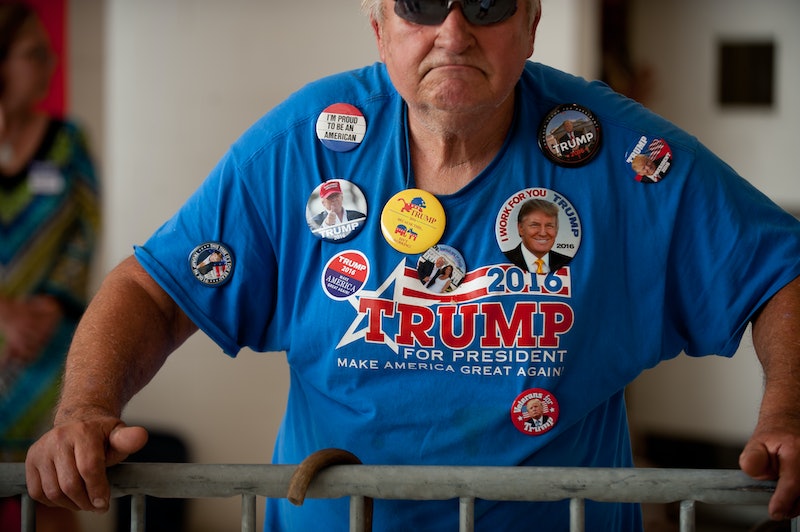 "The silent majority stands with Trump." It's a phrase you see time and time again, emblazoned in red, white, and blue on signs enthusiastically waved by the presumptive Republican nominee's supporters at rallies across the United States. But who are the "silent majority" responsible for Donald Trump's rise to political prominence? Are they really the majority, or is it merely a clever branding strategy by Trump, a celebrity businessman-turned-politician? A new survey paints a not so flattering picture of Trump supporters, digging into some of the ideas and opinions that influence them at the polls.

Findings from a new survey on immigration conducted jointly by Washington think tank the Brookings Institution and nonpartisan nonprofit the Public Religion Research Institute provide some interesting insight into what has driven some American voters to cast ballots for Trump. According to the survey, support for Trump seems highest among those who also find themselves wrestling with fears and concerns about immigration, terrorism, Islam, foreign influence, and religious and "reverse" discrimination. It's a startling picture of the polarization among American voters.

According to the survey, fears about terrorism are on the rise among Americans, with 51 percent of the survey's total respondents reporting they feel "somewhat or very worried" that they or a family member will be the victim of a terrorist attack. It's a dramatic rise from the 33 percent who reported similar concerns in 2014.

But a breakdown of the data shows the majority of respondents concerned about falling victim to terrorism are Republicans or Trump supporters. While only 44 percent of Democrats reported being at least "somewhat" concerned about terrorism, 62 percent of Republican voters claimed it was something they worry about. That number rose to 65 percent among Trump supporters to make them the group most concerned with the threat of a terrorist attack. It's disturbing proof that Trump's campaign strategy of fearmongering is effectively influencing his supporters.

One of the more startling findings of the Brookings Institution's report is the significant rise in the number of people who said, "the prospect of the US becoming a majority non-white country would bother them." A total of 21 percent claimed they'd be upset if the country became a majority non-white nation, a jump from the 14 percent reported in 2013.

Trump supporters again led the results when the data was broken down by party affiliation with a whopping 34 percent reportedly claiming to be uncomfortable with the idea of America becoming a majority non-white nation. In comparison, 18 percent of independents, 20 percent of Democrats, and 28 percent of Republicans said they'd be bothered by the change. It makes you wonder what some Trump supporters truly mean when they say, "make America great again."

Unsurprisingly, a breakdown of the data among racial lines showed respondents identifying as "white, non-Hispanic" were the most likely to consider "reverse racism" a serious problem — a total of 57 percent did.

Trump supporters were also quick to report feeling that "discrimination against Christians in the US today is a major problem." While half of Americans — a slim margin of 50 percent — did not think discrimination against Christians was a major problem, a total of 77 percent of Trump supporters did. (Just 34 percent of Democrats and 45 percent of independents agreed.) More and more it seems Trump's so-called "silent majority" share a common trait: perceived victimhood.

When Trump, now the presumptive Republican nominee, first stepped into the presidential race last year, he did so with a carefully crafted branding strategy that included a revival of Richard Nixon's call for support from the "silent majority." The phrase has since become a much-beloved rally cry among Trump supporters, many of whom claim it symbolizes their opposition to growing demands for political correctness. And while data from the PRRI-Brookings survey seems to paint Trump supporters as largely motivated by fear and prejudice (a frightening combination), it's worth noting that the so-called "silent majority" standing with Trump is not actually a majority at all, according to national poll numbers.