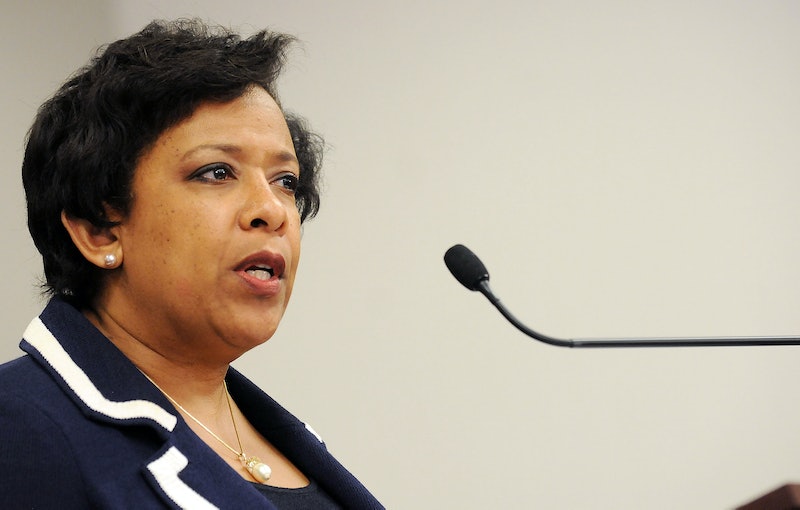 I'm about to say something I never thought I would ever say: I agree with many Republicans and even former Trump campaign manager, Corey Lewandowski on something of substance, that Attorney General Loretta Lynch should recuse herself from presumptive Democratic nominee Hillary Clinton's email server case. When Lynch allowed former President and husband of presumptive Democratic nominee, Bill Clinton onto her plane for a conversation, she lost the appearance of propriety in Clinton's email case. Even though there's no evidence of conspiring or something so egregious, I fear any decree from Lynch on Clinton's email would never be trusted. Here's the funny thing about public decisions: They are only as good as how they are perceived.

Lynch should recuse herself, in my opinion, and not just because of Tarmac-Gate, although that is seeing a bi-partisan thumbs-down. Clinton and Lynch made the curious decision to hang out together at Phoenix's Sky Harbor Airport, which Lynch has repeatedly maintained was a conversation just about their grandchildren. However, she did admit on Friday, "I understand that my meeting on the plane with former President Clinton could give them another reason to have questions and concerns.” She added, "I certainly wouldn’t do it again.”

Even before the meeting, there was a professional relationship, if not a personal relationship, with Clinton. Any, "personal interest or professional relationship with parties involved in the matter," is grounds for recusal under the rules of the Attorney General's office. Recusal is required, "where a conflict of interest exists or there is an appearance of a conflict of interest or loss of impartiality" under the same section of the U.S. Attorney's Manual. The tarmac encounter only exacerbates the appearance of partiality.

Lynch's statements Friday that she will "accept" the recommendations of the FBI and career prosecutors is not a way of fixing this problem. For her to say she is going to accept recommendations before they are officially reviewed by her is to essentially render her position moot. Her job is to critically examine their recommendations, and you can't do that if you already made a decision going into it. That doesn't make the optics better, it just makes her look like she is refusing to do her job.

No matter what was actually talked about between Lynch and Bill Clinton, there is a clear appearance of impropriety. And an appearance of impropriety is an established reason for recusal, not just for the Attorney General but for judges and officers of the court everywhere all the way down to a local county judge. Lynch is not excused from this standard, if anything she needs to embody it.