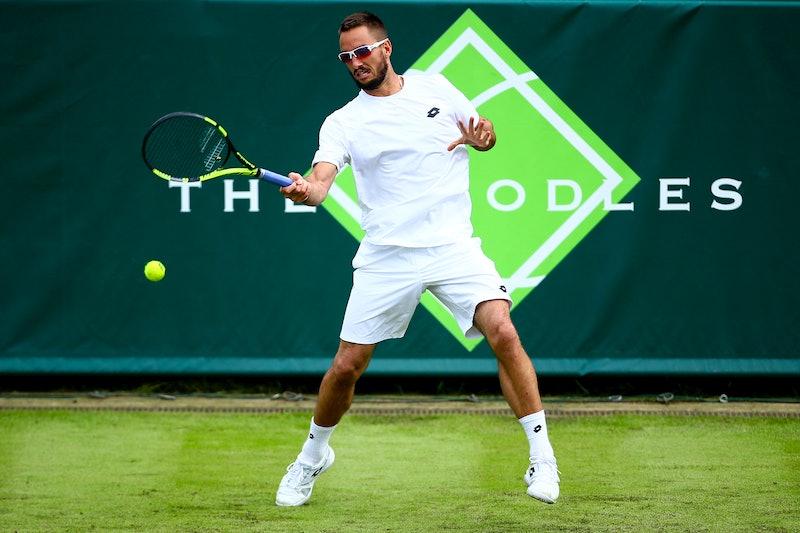 Wimbledon wimble-didn't for Serbian tennis player Viktor Troicki Thursday. The umpire overruled a call by the line judge and gave another point to Troicki's opponent, Spanish player Albert Ramos-Vinolas. Troicki was already losing 5 to 3, and so it may have stung a little bit. Let's just say Troicki was not happy; he melted down on the court.

It was a fit of epic proportions. Once he realized the ball was out, he screamed, "No!" and took the ball over to the chair empire. He asked the ump to reconsider. "Look at it! Come on, please, look at it!" he said. Needless to say his request went unanswered. Troicki served the ball in anger into the crowd and went on, "You are the worst umpire ever in the world. What are you doing? Did you see the ball? You’re so bad.”

The internet, needless to say, found this hilarious. The BBC invited fans to do their best job of imitating Troicki. They were perfectly brilliant. Others compared his outburst to reality TV. This is, as one fan tweeted, "Not an episode of The Hills."

He was also compared to some other celebrities — not just for looks but also for his larger-than-life attitude.

Don't look to Troicki for apologies. Afterwards, he didn't feel much remorse:

He should be the one who is fined, he cost me. I'm not saying he cost me the match but he cost me an important point. I behaved well. I didn't do anything until that moment. He's doing such a match and I've never seen him in my whole career. That's just crazy.

I spoke to the referee after the match and I think it shouldn't happen that such a chair umpire can be on the singles court with the men's on grass, where there is no Hawk-Eye. He's not able to do a proper job, so I told him that. I was just boiling at that stage. I just couldn't talk normally.

This isn't the first time that Troicki had an outburst of this magnitude — but it is the most important match during which it has happened. It might not be typical Wimbledon behavior, but you won't find anyone nodding off during a match like this.

More like this
Are Tom Daley & Louis Theroux Bound For 'Strictly'?
By El Hunt
Twitter Is In Utter Meltdown After 'Derry Girls’ “Poignant” Finale
By Sam Ramsden
Twitter Can’t Get Enough Of The WAGatha Christie Trial
By Nola Ojomu
8 'Selling Sunset' Continuity Errors You Definitely Won't Be Able To Unsee
By Rachel Mantock
Get Even More From Bustle — Sign Up For The Newsletter