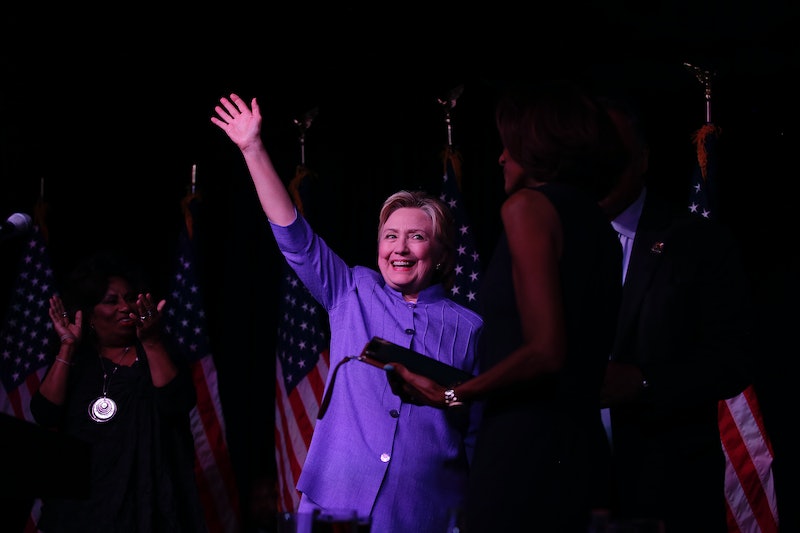 This election cycle has been positively surreal, and its sheer unpredictability has led many people — politicians, pundits, casual election observers, and everyday news consumers alike — to question everything they think they know about how politics works. Thankfully, there are better ways to go about predicting elections: Here are seven data-based 2016 election predictions that cut through the noise and get right down to business.

Nate Silver of FiveThirtyEight is largely responsible for giving data a good name in politics, thanks in part to his perfect track record during the 2012 cycle. But he’s not the only one — there are plenty of other forecasters out there who use statistics and history, not gut feelings, to predict elections. Each takes a slightly different approach: Some deal in percentage chances, others simply predict electoral vote outcomes, and all arrive at their conclusions differently.

For these reasons, it’s good to look numerous forecasts, not just one. And while all of the forecasts listed below are different, all have one thing in common: They show Hillary Clinton as the heavy favorite to win in November. You only need 270 electoral votes to become president, and at this point in the race, it doesn’t look like Clinton will have much trouble winning them.

Silver released his general election forecasting model earlier this week, and it gives Clinton a 78 percent chance of winning the presidency to Donald Trump’s 22 percent. Silver predicts that Clinton will win 343 electoral votes, versus 194 for Trump.

Sam Wang of the Princeton Election Consortium uses a polls-only model, with a heavy reliance on state-based polling, and concludes that Clinton has an 85 percent chance of winning in November. As Wang explains, this “includes the possibility of movement between the time the polls were taken and Election Day.” 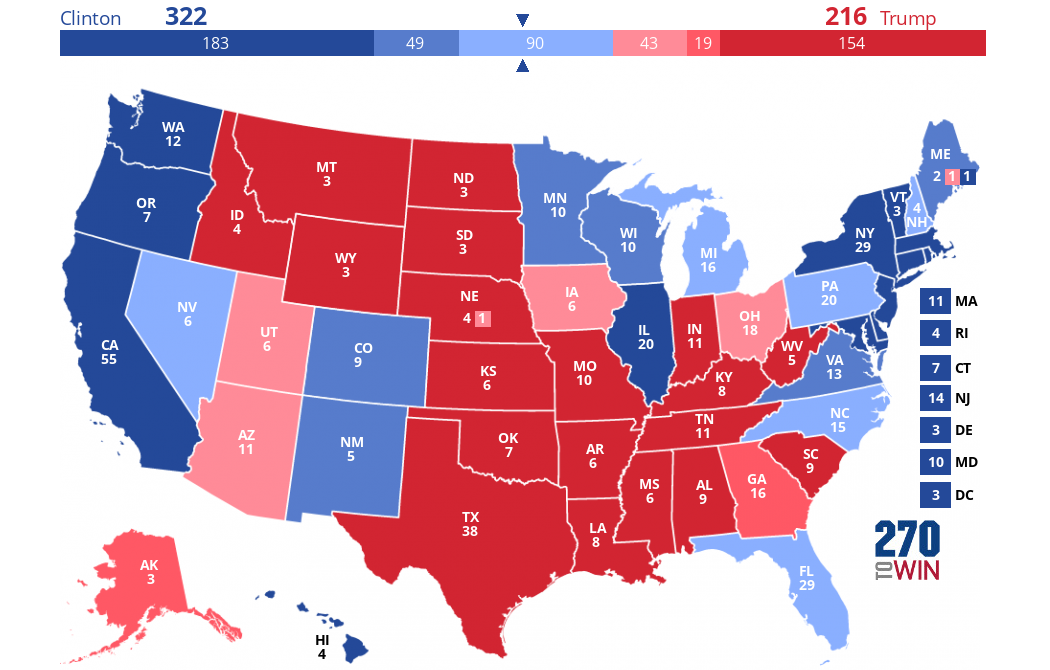 The University of Virginia’s Larry Sabato doesn’t give odds that one candidate or another will win. Instead, he predicts what the final electoral vote count will be based on statewide rankings. As of June 23, Sabato and his team forecast Clinton receiving 347 electoral votes and Trump winning 191, which would be a landslide for Clinton. Note that Sabato’s model forces every state into either Clinton or Trump’s column — unlike other models, it doesn’t leave any of them in the “toss-up” category. 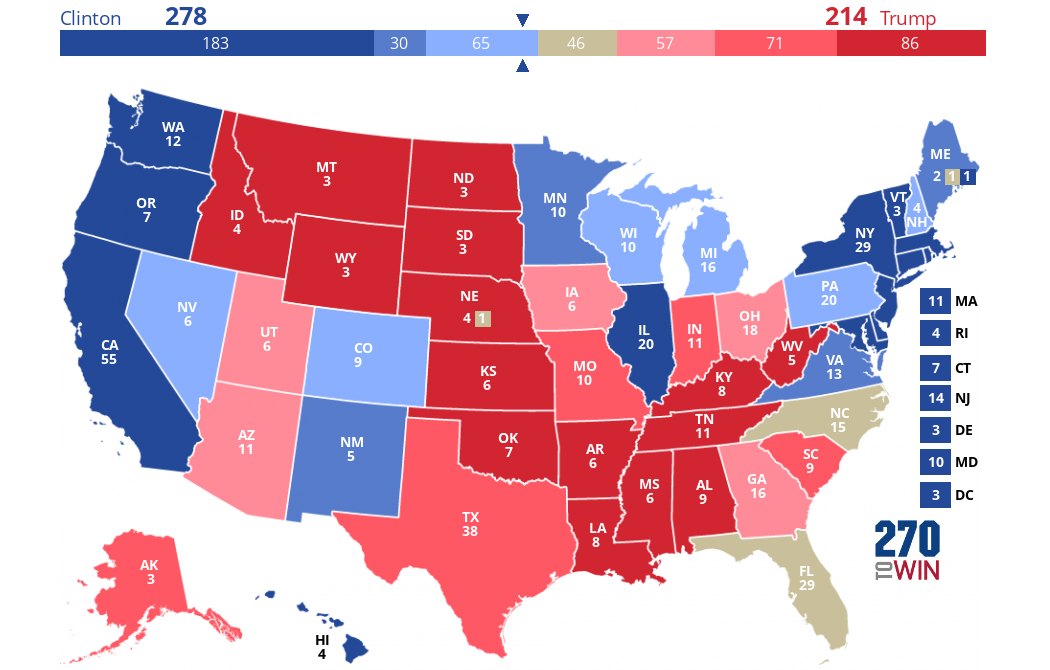 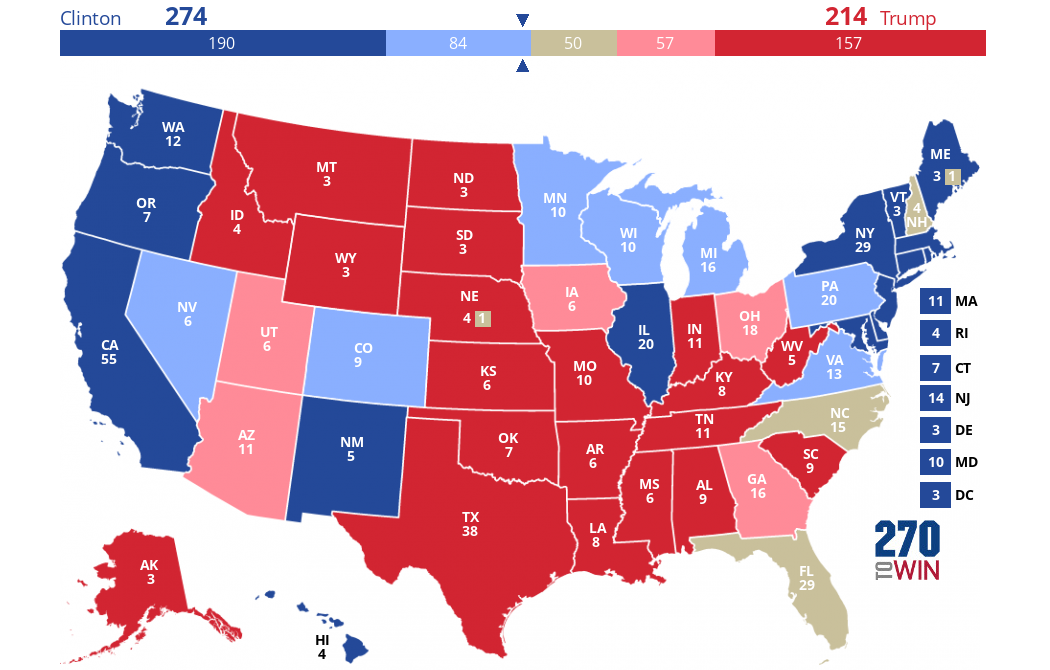 Moody’s Analytics is generally more focused on credit ratings than politics, but it does forecast elections, and this time around, it predicts Democrats will receive 332 electoral votes to the GOP’s 206. It’s relevant to note that Moody’s forecast — which is based on fundamentals like economic performance and gas prices, as opposed to individual candidates — has been correct in every election since 1980. 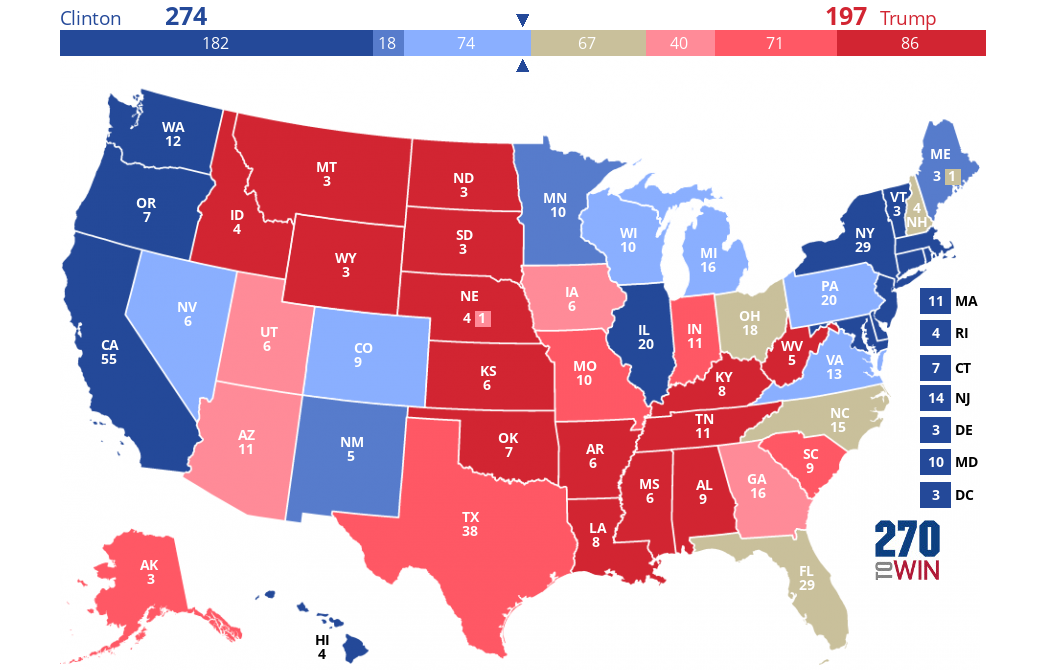 Finally, the good folks at 270ToWin — a must-visit site for anyone who likes playing around with electoral maps — have aggregated seven different forecasts into one electoral map, including some of the ones listed above and others. The consensus map has Clinton winning 253 electoral votes and Trump winning 191. It also keeps nine states and 94 votes in the toss-up category.

Out of all the forecasts listed above, this is the only one that doesn’t predict a definitive Clinton victory, which is due to variances in the certainty that different forecasters have regarding individual state outcomes. Still, this map puts her within 17 electoral votes (roughly 1-3 states, depending on the state) of winning. And that’s probably the most accurate depiction of where the election stands at this point: Nothing is for certain yet, but Clinton remains the strong favorite to become America's next president.