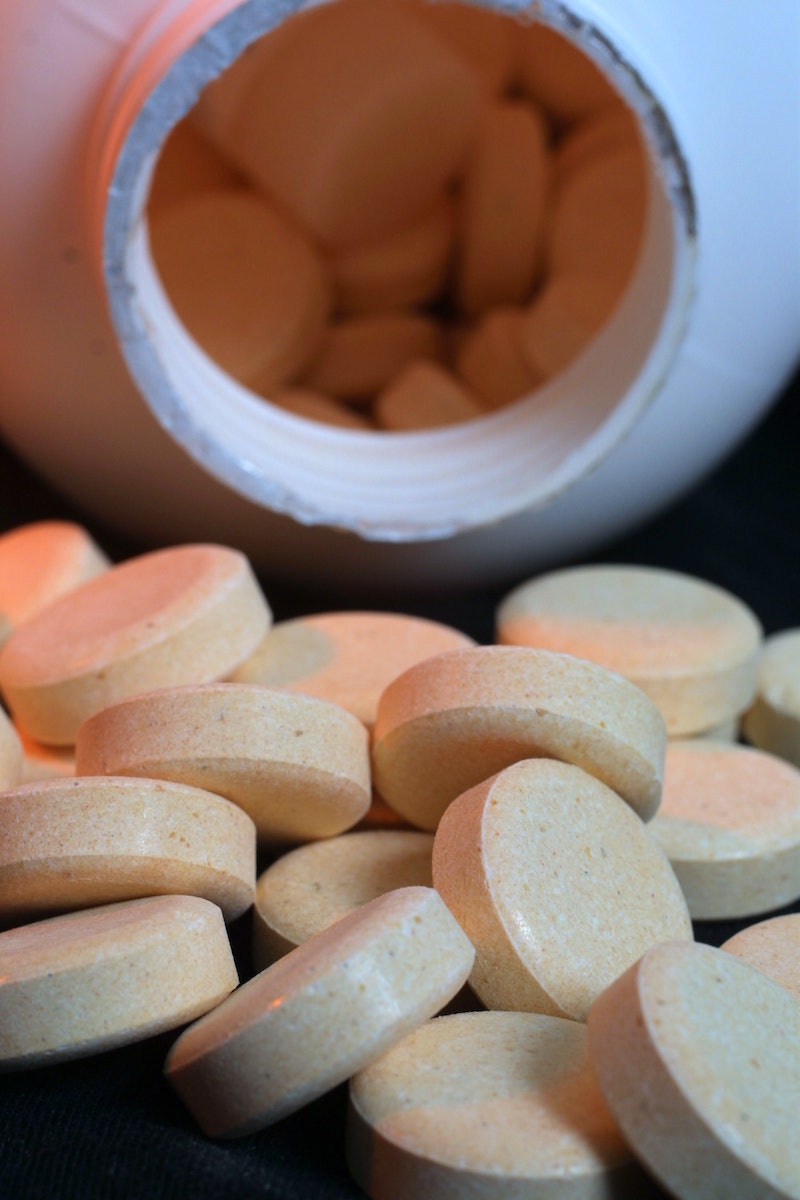 It doesn't need to be Sleep Awareness Week for any student, baby, or cat to tell you: sleep is pretty much the best thing ever. Not only does it feel like clouds and bubbles, but not getting enough sleep can increase your risk of heart disease, high blood pressure, and yes, bags under your eyes. But for many of us, insomnia is a relatively common condition, affecting between roughly 50 to 70 million American adults. And, of course, where there's a problem, there's a pill.

The most popular sleep drug in the U.S. is Zolpidem, though you probably know it by its commercial name: Ambien. The year 2011 alone saw over 40 million Ambien prescriptions filled. But there are in fact loads of different kinds of sleep aids on the market — from over-the-counter drugs like Nytol and Sominex; to the highly addictive Benzodiazepine sedative hypnotic class of sleeping pills; to your (deceptively) mild natural alternatives.

Hand-in-hand with those options come some pretty damn freaky side-effects. Next time you pop a pill, consider yourself forewarned.

This has to be one of the weirder things to be told you've done without recollection. But, apparently, on sleep meds, it does happen: patients report having taken Ambien or similar drugs, going to bed, and then having sex in their sleep. (Presumably not alone, and we hope with consent?) Hey, at least it's exercise?

Potentially the most humbling side-effect of all time, some patients taking sleep medication— particularly Ambien — have reported waking up to find themselves covered with food wrappers, their fridges empty, and their waist-line inexplicably widening.

"Night eaters said they woke up to find Tostitos and Snickers wrappers in their beds, missing food, kitchen counters overflowing with flour from baking sprees, and even lighted stoves," writes the New York Times.

Maybe the sleep-eating and the sleep-sex can somehow cancel each other out? Probably not.

If you suffer from sleeplessness due to restless leg syndrome, you might be prescribed domapine agonists, like pramipexole. But beware: you might wake up with a gambling problem. Seriously. It's happened a statistically infinitesimal amount of times, but one patient reportedly lost $140,000 from this very expensive side effect. There were 11 cases of sudden gambling addictions reported in a 2005 Mayo Clinic study looking at patients taking dopamine agonists, and another three patients were reported in a 2007 study.

Another side effect of nonbenzodiazepines could be binge-shopping over the Internet. Some pill-poppers even report getting in aggressive bidding wars on Ebay. Take this case, reported by CNN:

Hannah Paramore, 48, president of Paramore/Redd Online Marketing in Nashville, got herself blackballed from eBay (EBAY, Fortune 500) one night last fall. While on a business trip, she apparently used her laptop to join in the bidding on several handbags and won three of them - for which she refused to pay, since she didn't want them and didn't remember shopping. "It was truly traumatic," she says now.

Lest you think it's only pharmaceutical companies that cause trouble, some natural sleep aids come with their own set of problems. One natural sleep aid, Kava, has been associated with some major liver damage issues. One of the first signs of a liver problem? Brown urine and yellowed eyes. So ... watch out for that.

So what have we learned here? Well, it seems that when inhibitions/consciousness are removed, we pretty much all just want to have sex, eat, gamble, and shop. Sounds about right.

More like this
GIRLI & Q Fell In Love At A Skatepark & Never Looked Back
By Jessica Morgan
13 Ideas To Add To Your Sex Bucket List
By Kristin Magaldi
6 Abortion Advocates To Follow On TikTok
By Sara Youngblood Gregory
The Best Underwear For Sensitive Skin, According To A Dermatologist
By Alexa Vazquez
Get Even More From Bustle — Sign Up For The Newsletter