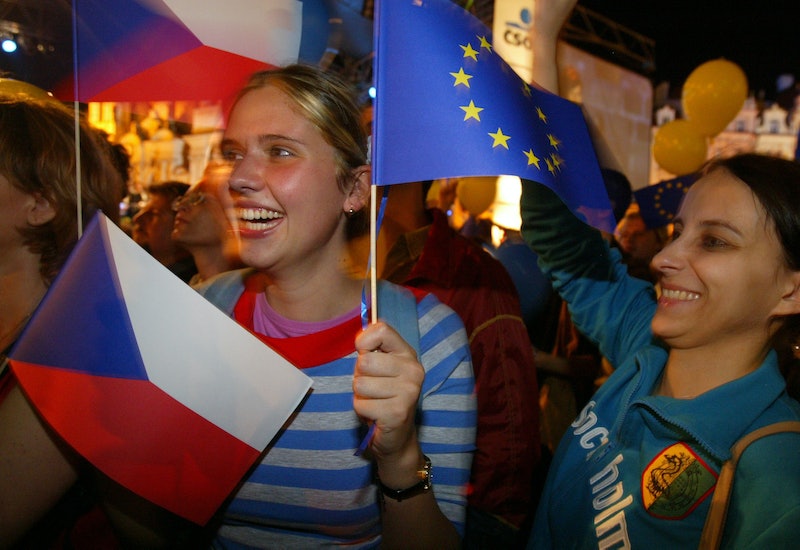 Consider referendums on European Union membership the latest craze to come out of Britain since the Spice Girls. The latest fan? Czech President Milos Zeman, who called Thursday for the Czech Republic to vote on its EU membership, much to the chagrin of the country's other government officials. But don't expect a "Czexit" anytime soon. The Czech prime minister has firmly rebuffed Zeman's referendum proposal.

Although Zeman claimed to wholly support staying with the European Union, he called for a referendum on the Czech Republic's EU and NATO memberships while speaking in the eastern town of Velke Mezirici. "I disagree with those who are for leaving the European Union," Czech Radio quoted Zeman as saying, according to Reuters. "But I will do everything for them to have a referendum and be able to express themselves. And the same goes for a NATO exit too."

The Czech Republic has been a NATO member since 1999 and joined the EU in 2004 after being formally invited to the bloc in 2002. A referendum regarding the EU's invitation was held in June 2003, according to the BBC, with Czechs voting in favor of obtaining EU membership. And while Britain's decision to break from the EU may have inspired the country's sizable number of Euroskeptics — something many government officials feared would happen before Britain held its vote last month — the Czech government is staunchly against the idea.

"Membership in these organizations is a guarantee of stability and security," a spokesman for Czech Prime Minister Bohuslav Sobotka said in a statement. "The government is not considering taking any steps which would question in any way our membership and the long-term orientation of the Czech Republic's foreign policy. Therefore it does not envisage any referendum."

It isn't the first time Zeman has voiced an opinion at odds with those of other Czech and European government officials. Since winning the Czech Republic's first direct presidential election in 2013, Zeman has continually seemed sympathetic toward Russia and has been vocally opposed to refugees fleeing conflict-torn countries for Europe, going so far as to call the influx of refugees "an organized invasion."

According to Time, however, Zeman does not have the authority to actually authorize and organize a referendum on the Czech Republic's EU or NATO membership as doing so would require the country's constitution to be amended. While Zeman may not have the legal authority to implement a public vote, the idea may prove popular with many Czechs. Only one-third of the country reportedly trusts the EU, Bloomberg reports an April poll from Czech Academy of Sciences' pollster CVVM found.