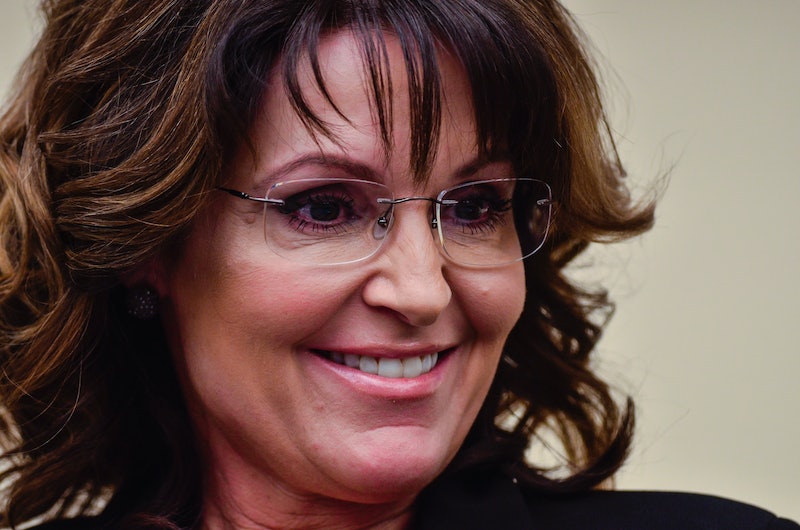 After giving us “refudiate” in 2010 and “squirmishes” earlier this year, Sarah Palin has introduced yet another colorful piece of terminology into the American political lexicon: “Splodey.” You know, as in, “splodey heads keep 'sploding!” Makes perfect sense, right? Palin’s “splodey” quote, which she deployed at the Western Conservative Summit on Friday, produced a combination of confusion and mockery. In other words, it was par for the course for the former Alaska Governor.

“It’s really funny to me to see the splodey heads keep ‘sploding over this movement,” Palin said, referring to Republicans who doubted that Donald Trump would win the GOP presidential nomination. “Because it seems so obvious… voters are so sick and tired of being betrayed!”

In a general sense, it’s clear what Palin meant. She was expressing her own enjoyment and amusement (“it’s really funny”) at the the incredulous reaction (“splodey heads keep sploding”) that many Republicans have had to Trump’s success (“this movement”). Yet still, her phrasing begs the question: What, exactly, makes something “splodey”?

Perhaps, by “splodey heads,” Palin meant “heads with a high propensity to explode.” That’s probably a bit more accurate. Palin has endorsed Trump, and she’s generally not a fan of the Republican establishment, so it would make sense for her to perceive these #NeverTrump Republicans as especially prone to having their heads “exploded” by events beyond their control or comprehension.

This isn’t Palin’s first foray into uncharted linguistic waters. Back in 2010, she introduced the world to “refudiate,” an apparent combination of “repudiate” and “refute.” Though some believed the term to be unnecessary, Palin was ultimately vindicated when the New Oxford American Dictionary named “refudiate” the Word of the Year and introduced it to later editions of the dictionary.

Six years later, while lending Trump her endorsement, Palin referred to “squirmishes that have been going on for centuries.” As with much of what Palin says, the precise intended meaning was unclear. The context, though, suggested that she was talking about the Sunni-Shi’a split in Islam — a rather seismic historic dispute that, perhaps, qualifies as more than just a “squirmish.” Or even a bona fide skirmish. Now, if you'll excuse me, my head is feeling a bit splodey.