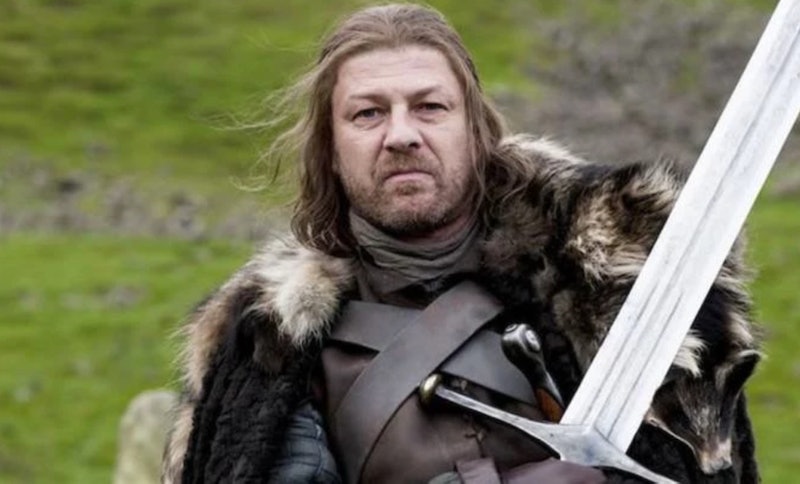 As Season 6 drew to a close Sunday evening with Cersei Lannister settling into the Iron Throne, I thought, I'm sure the Starks will be stoked about this! The virtuous Starks and the power-hungry Lannisters have never exactly been on the same page, and I don't believe that it’s too bold an assumption to think former won’t be happy when they find out that the ruthless Queen Cersei is back in control of the Seven Kingdoms. Granted, the two families weren't always always at odds; once upon a time, House Lannister and House Stark got along... sort of.

You want more details? *Dusts away the cobwebs that’ve collected in the corner of memory bank dedicated to GoT history.* Alright, let's do this (h/t gameofthrones.wikia and awoiaf.westeros.org. Without you, I am as helpless as a lost rabbit hopping through the Haunted Forest).

But whatever semblance of an alliance existed between the Starks and Lannisters was dunzo once Cersei and Jaime Lannister pushed Bran Stark out a window. Oh, and when someone hired an assassin who tried (and failed) to kill Bran. Oh, and when Joffrey had Ned executed. Oh, and when Catelyn Stark kidnapped Tyrion Lannister because she thought he had something to do with the assassination attempt on her son Bran. Oh, and when Ned only agreed to be the Hand because Lysa Arryn told him and Catelyn that she suspected the Lannisters murdered Jon Arryn. Oh, and when Cersei ordered that Sansa's direwolf be put to death. Oh, and WHEN THE RED FLIPPIN' WEDDING HAPPENED. Oh, and — the list goes on.

The short answer: The families tolerated each other for a while, but that all changed once the Lannisters started murdering Starks. Will they ever (barely) get along again? Hey, this is GoT— anything is possible. For all we know, Tyrion Lannister could have an absolutely irresistible peace treaty up his sleeve.