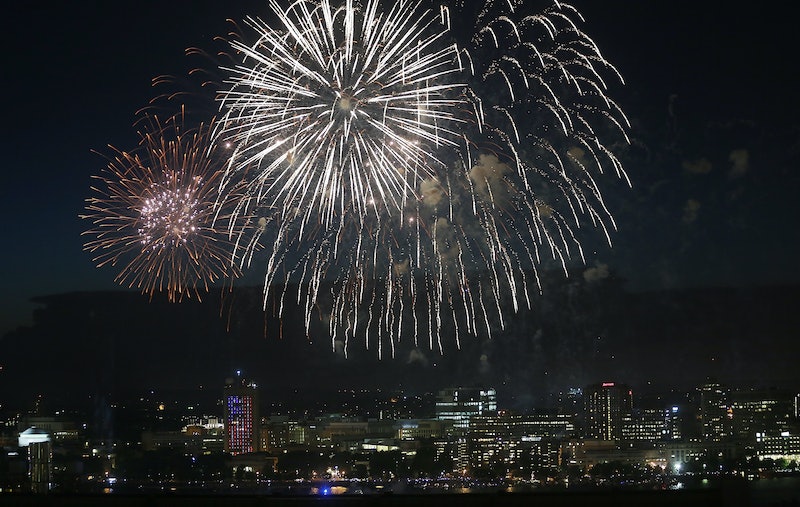 Cover your ears: It's Fourth of July weekend, which means you can expect some of your rowdy neighbors to break out those fireworks and firecrackers. Fireworks have become a staple of American celebrations, because nothing screams "America!" like fire and explosions reminiscent of war and destruction. But not every American has access to fireworks and similar novelties — some U.S. states have total bans on consumer fireworks, while others have laws regulating either fireworks, firecrackers, or sparklers. If you live in any of these states with bans on fireworks, and planned on having a private fireworks party, you might want to re-think your July Fourth plans.

Currently, there are just three states that ban the sale and possession of all types of consumer fireworks and firecrackers: Massachusetts, Delaware, and New Jersey.

New Jersey has one of the strictest consumer fireworks bans in the nation; the Garden State outlaws all consumer fireworks, firecrackers, bottle rockets, sparklers, torpedoes, sky rockets, and Roman candles. The only way New Jerseyans can (legally) see fireworks is at professional shows, which have approved permits.

Massachusetts and Delaware also ban everything from fireworks to novelties like sparklers. All three states carry pretty heavy fines plus possible prison time.

If you live in either Massachusetts, Delaware or New Jersey, don't think you can just drive to a nearby state and load up on all the novelty explosives you want. In each of these states, you will be charged for smuggling in consumer fireworks from other states.

Although only three states have all-out bans on every type of consumer fireworks, a number of U.S. states still heavily regulate fireworks and novelty explosives. For example, Iowa and Illinois only allow the use and sale of sparklers. In Illinois, residents can also use items such as snappers. Meanwhile, the Iowa state legislature attempted to legalize the sale of consumer fireworks earlier this year, but the bill was ultimately blocked.

There are also states like New York, where most aerial consumer fireworks are illegal, but sparklers are permitted for purchase and use. New York, Minnesota, and Rhode Island also ban the use and possession of Roman candles, but allow handheld novelty fireworks and sparklers.